We NEED fair labour laws to save lives 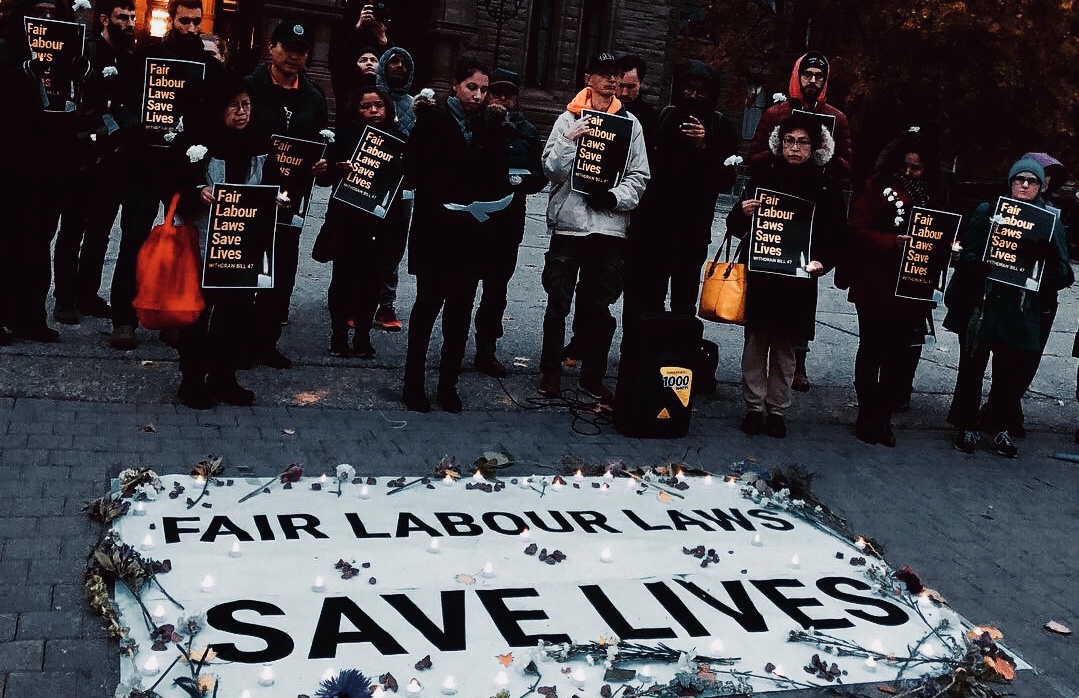 On Tuesday, October 23, the Doug Ford government introduced Bill 47. This legislation seeks to impose a real dollar cut in the minimum wage and eliminate most of our new workplace rights, including paid sick days, equal pay for equal work, and more. If passed, this outrageous legislation will force millions into poverty, while putting workers' health and safety at risk. Click here to read our briefing note on the bill.

That's why, across the province, the reaction to Bill 47 was swift. Emergency actions sprang up in over 15 cities, including in: Oakville, Ottawa, Whitby, North Bay, London, Waterloo, Peel, Scarborough, Newmarket, Kingston, Aurora, Sudbury, Etobicoke, Niagara, Toronto, and more.

In Toronto, the Fight for $15 & Fairness along with the Ontario Federation of Labour, organized a well-attended media conference at Queen's Park the very same day the the regressive legislation was tabled. The following day, an emergency rally outside the Ministry of Labour drew 500 people who marched to the legislature, calling on the government to reverse course.

In all corners of the province there is an incredible determination to push back against Bill 47 and more actions are unfolding almost every day.

Sadly, on Friday, we learned the tragic news that a 4th temp agency worker was killed at a Fiera Foods related bakery in Toronto. This is the same food processing company where 3 temp agency workers previously lost their lives, prompting an undercover investigation by Toronto Star's Sara Mojtehedzadeh. We send our deepest condolences to the family, friends and co-workers of the deceased.

In light of the tragedy, we held an emergency vigil that same night (click here to see the live-stream). Another community vigil is taking place this Monday at 5:30 PM at Keele Street & York Boulevard (main entrance of York University), which is very close to the location of the plant where this worker was killed. Please let us know if you can make it (click here), and bring candles and flowers with you if possible. 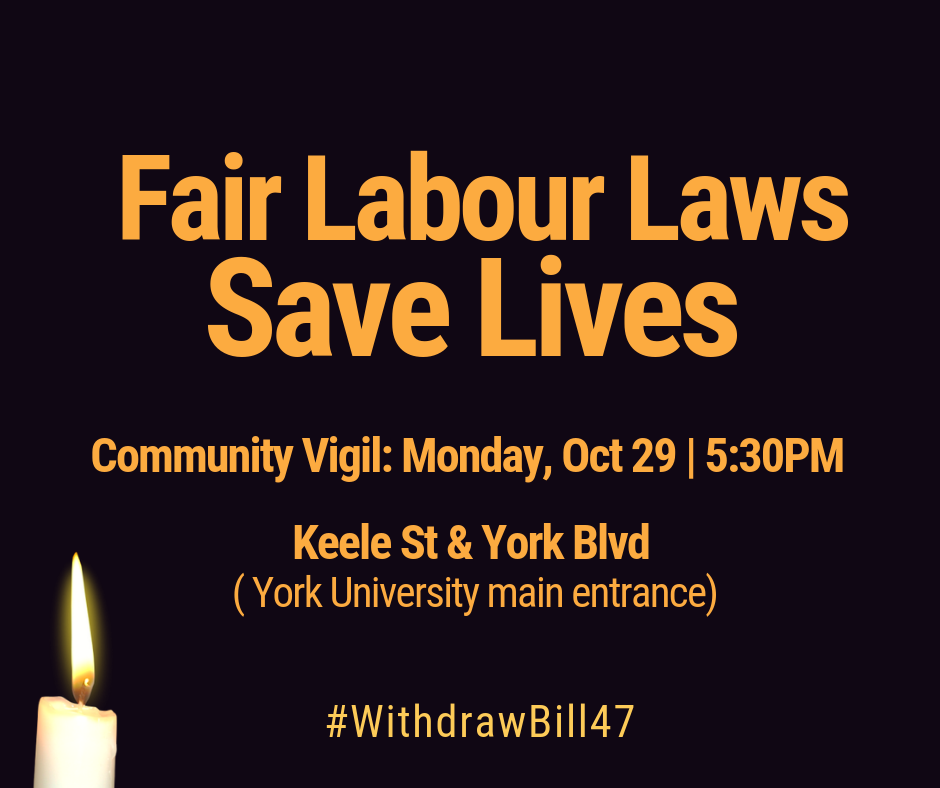 We know this heartbreaking death is not an isolated event (click here to read our backgrounder on the Fiera Food deaths). It is what happens - and what will happen in the future - if workers are treated as disposable and if the laws meant to protect us are weakened, or not enforced at all. Premier Doug Ford must immediately withdraw Bill 47 and strengthen the enforcement of our existing labour laws. This means resuming the proactive inspections done by the Ministry of Labour (halted since September) and hiring the 100 new employment standards officers that were planned before the Ford government imposed a hiring freeze.

Let's be clear about the serious implications of Bill 47:

We need your help to deliver a message to Premier Doug Ford and his government: Fair labour laws, save lives. Bill 47 has not been passed, and it needs to be withdrawn immediately. Our elected officials must ensure our safety and well-being on the job, not jeopardize it.

Join us at an upcoming action to tell the government: #WithdrawBill147! More events are coming online every day. Visit the campaign website to see the most up-to-date listing.

HAMILTON, Emergency meeting
6:00 PM - 8:00 PM. Workers Arts & Heritage Centre, 51 Stuart St
Join this emergency meeting to discuss how we can mobilize against the planned repeal of our decent work laws.
Click here to RSVP and here to share on Facebook

RICHMOND HILL, Outreach outside MPP office
6:00 PM - 7:30 PM. Outside PC MPP's Michael Parsa's office, 13291 Yonge St
Join us outside Richmond Hill PC MPP Michael Parsa's office to deliver the message: Withdraw Bill 47. We will have posters and leaflets to talk to our neighbours too.
Click here to RSVP and share on Facebook

BRANTFORD, Emergency action
1:30 PM - 3:30 PM. Victoria Park, 65 Market St
We'll be meeting at 1:30 PM at Victoria Park by the middle statue before heading over to local MPP Will Bouma's office to do petitioning and postering outreach.
Click here to RSVP and here to share on Facebook

OTTAWA, Halloween action on Carleton Campus
11:00 AM - 1:30 PM. Carleton University campus, outside OPIRG office (326 UC)
Join us to petition across Carleton campus to get signatures on our petition in support of $15 minimum wage and fair labour laws for all. Dress in halloween costume if you can!
Click here to RSVP and here to share on Facebook

OTTAWA, Campus action outside the office of Minister of Training, Colleges and Universities
10:00 AM - 11:00 AM. Outside Minister Fullerton's office, 240 Michael Cowpland Dr, Kanata
Join us outside Minister of Training, Colleges and Universities Merrilee Fullerton's office. We will be calling on Minister Fullerton to stand with students, staff and faculty and reject the repeal of decent work laws.
Click here to RSVP and here to share on Facebook

TORONTO, Emergency Phonebanking
2:00 PM - 7:00 PM. 720 Spadina Ave, Suite 223
On Friday, help us call our supporters to get them to leave messages with their own Members of Provincial Parliament, to deliver the message: #WithdrawBill47 immediately! No previous experience is needed, we have scripts and snacks to help you get going.
Click here to RSVP and share the event with your network