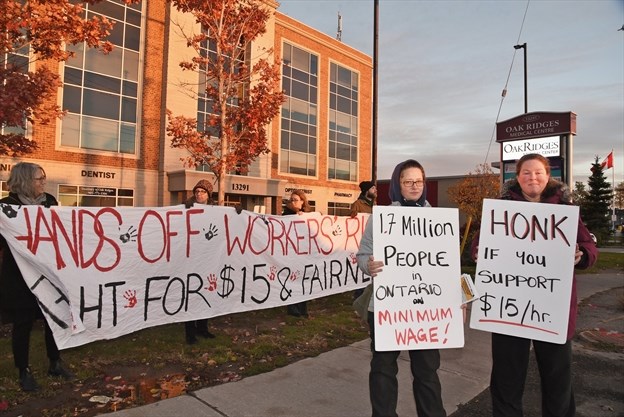 The message was loud and clear: “Hands off workers’ rights.”

It was part of the provincial movement of Fight $15 and Fairness - a prominent provincewide labour rights advocacy group – that has strongly opposed Ontario’s sweeping labour reform bill.

The rally in Richmond Hill was only a start, McLean said, noting that they were going to rally at all MPPs’ office around York Region to have their voices heard.

McLean said they chose Parsa’s office first because of his important role as parliamentary assistant to the Minister of Economic Development, Job Creation and Trade, which “should put him in a position to understand the true benefits of a $15/hr minimum wage.”

On Oct. 23, the Ontario government tabled Bill 47, the Making Ontario Open for Business Act that would repeal much of the changes made by the previous government under Bill 148, which was set to start January 2019.

The main amendments include freezing minimum wage at $14 until 2020 and cuts to paid sick days.

“They say that this government is for the people. Well, explain to me how they’re for me,” said Christine Ilot, a 45-year-old Richmond Hill resident who co-organized the event on Monday.

No one knows better what it is like to work on minimum wage than Ilot, who works three different part-time jobs, all paying minimum wages.

“Just making sure our messages are getting across and clear because most of these MPPs have refused to meet with us personally,” said Jessa McLean, leader of the movement’s York Region chapter.

She said she still had to ask her mother for help to pay her rent in the summer when her shifts get cut short.

Even $15 per hour would not be a living wage in the Greater Toronto Area (GTA), she said, but it could be a start.

Expectedly, MPP Parsa did not attend the rally, but Ilot said she would love to meet him in person and ask for an explanation.

“I would love to have him explain to my face why they stood up and applauded this new bill. To me, it’s just faulted.”

The demonstrators have gone to Aurora and Newmarket earlier in October and are planning to set up meetings with MPPs around York Region in the coming weeks, McLean said.