Online via Zoom. RSVP for link

The third wave is quickly showing to be the most devastating one yet, and it is bewildering that the provincial government has deliberately acted to deny workers paid sick days.

No paid sick days, unvaccinated workers, and the wild-fire spread of COVID-19 variants make for a deadly storm. We must hold our elected officials accountable for the crucial lessons we learned in the first and second waves: precarious work and a lack of paid sick days are key drivers of infection that continue to harm Black, racialized and low-income communities most.

Join us to hold our MPPs and provincial ministers accountable for their inaction on paid sick days despite near-universal support. We will host the event through Zoom.

As you may remember, on March 1, the Ontario government voted against paid sick days legislation introduced by MPP Peggy Sattler, despite support from all three opposition parties. Due to the enormous pressure, another bill that would legislate 10 paid sick days — Bill 247, Paid Personal Emergency Leave Now Act — has passed first reading. When we call our elected officials, we will let them know that when paid sick days come up for a vote, they must not make the same mistake or we will not be voting for them in the next election.

This event is being co-organized by the Fight for $15 & Fairness, the Decent Work & Health Network, CUPE Local 905, and the Toronto & York Region Labour Council.

What: World Health Day Phone Zap
When: Wednesday April 7th at 7pm - 8pm
Where: Online via Zoom. RSVP to be emailed Zoom link 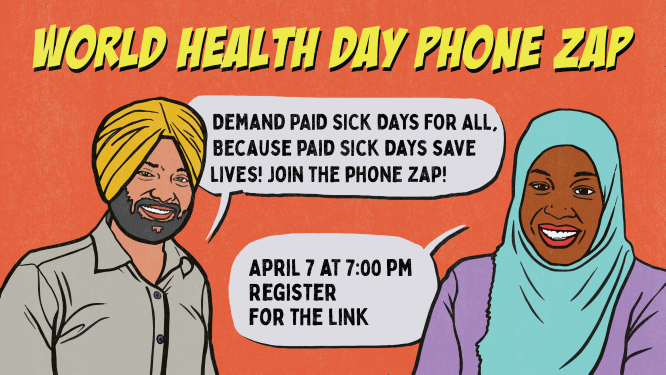