We need better enforcement: what the case of Canada Fibres Inc. means

We’ve told you about the case of Angel Reyes, who worked through a temp agency – United Staffing – at the same workplace – Canada Fibres Inc. – for 5 years at minimum wage. He spoke to the Toronto Star in May about his experiences as a temp agency worker, and days later was dismissed. As his case made the headlines, the Fair Wages Office of the City of Toronto opened an investigation into the case.

Why? Because the City of Toronto has a fair wage policy to ensure that contractors it hires pay their workers at least the prevailing wage in their sector. Canada Fibres Inc. has a large contract with the City of Toronto, and the Fair Wages Office is investigating whether, by hiring minimum wage temp agency workers, this policy has been violated. If found in violation, money can be witheld from Canada Fibres Inc.’s contract with the City to pay these workers what they are owed, the company will be listed publicly as having been found in violation of the policy, and could be prevented from bidding on future City contracts.

But this is not the kind of enforcement that the provincial government does, an issue that the Toronto Star also raised in an article last week. The ability to force employers to pay money owed to workers, real financial penalties for employers that violate the law, and making this information publicly available are essential tools in deterring violations in the first place, because they represent real costs to employers who would break the law. This is why the Fight for $15 & Fairness is demanding better enforcement of employment standards, so that workers can get real protection on the job.

Let the government know that we need better enforcement. Email Minister of Labour Kevin Flynn, or tweet him @OntMinLabour @MPPKevinFlynn. Tell him it’s #time4decentwork and #15andfairness in Ontario, and ask your friends, family, co-workers, and neighbours to do the same.

The public consultations for the Changing Workplaces Review have taken place in Toronto, Ottawa, Mississauga, and Guelph. Members of the Fight for $15 & Fairness have participated in all of them, and/or are preparing to speak at all upcoming consultations, including: the Ontario Federation of Labour, the Canadian Federation of Students-Ontario, United Steelworkers, Workers United, the Ontario Confederation of University Faculty Associations, Unifor, Workers’ Action Centre, Parkdale Community Legal Services, the Migrant Workers Alliance for Change, Peterborough Workers’ Action Centre, We are Oshawa, Poverty Free Thunder Bay, Sudbury Workers’ Education and Advocacy Centre, Young Communist League, Ryerson Social Justice Centre; and several local labour councils including: Lindsay, Oshawa, Peterborough, Sudbury, and North Bay. Several member groups are also organizing events and forums in the lead up to the consultations to discuss the issues in their communities and prepare their presentations.

On June 18th, the Workers’ Action Centre and Access Alliance organized a street party for the Fight for $15 & Fairness in Scarborough to spread the word about the campaign. More than 250 signatures on petitions were collected, great connections were made with residents in the neighbourhood, and a good time was had by all! Here are some photos: 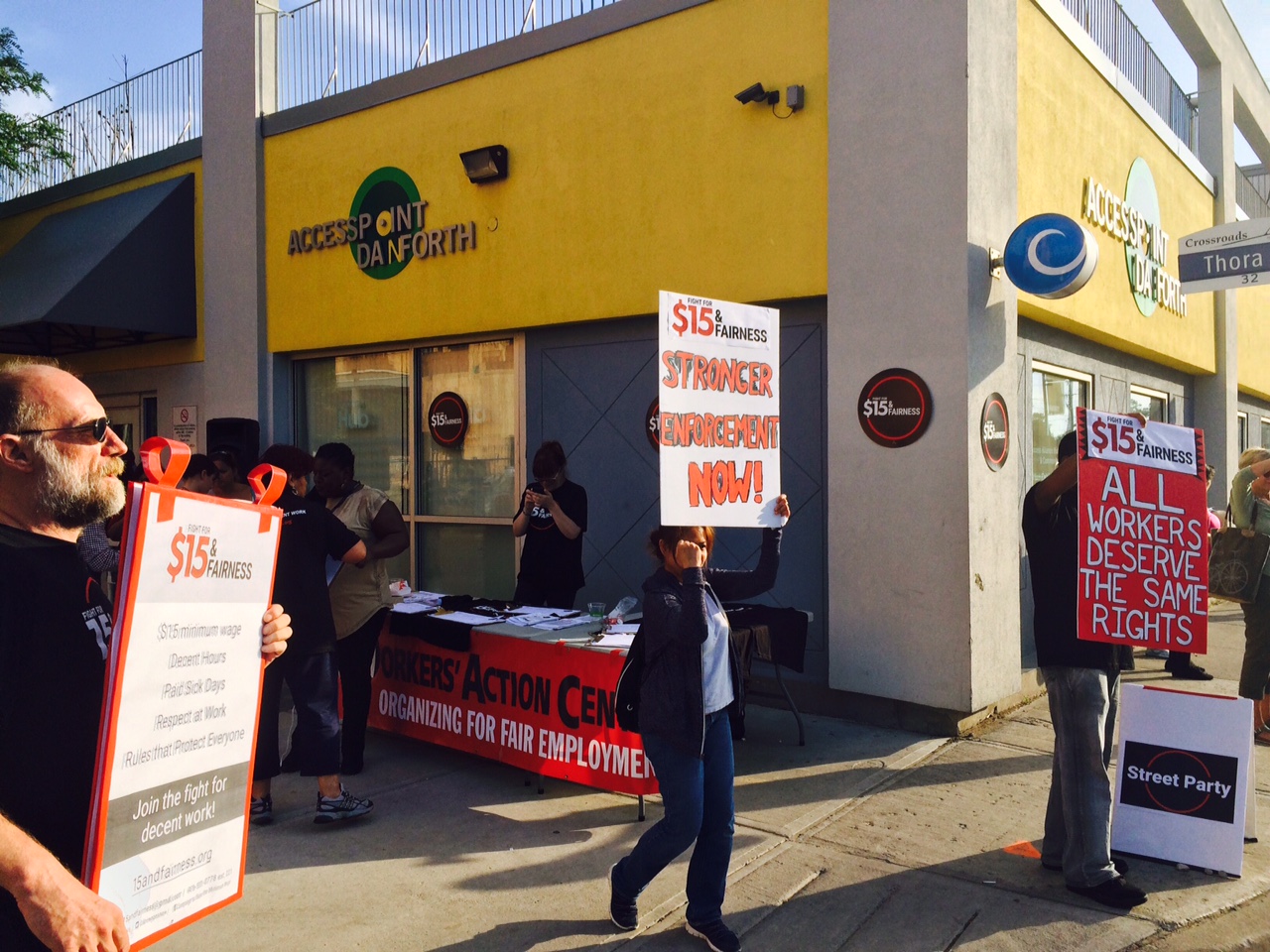 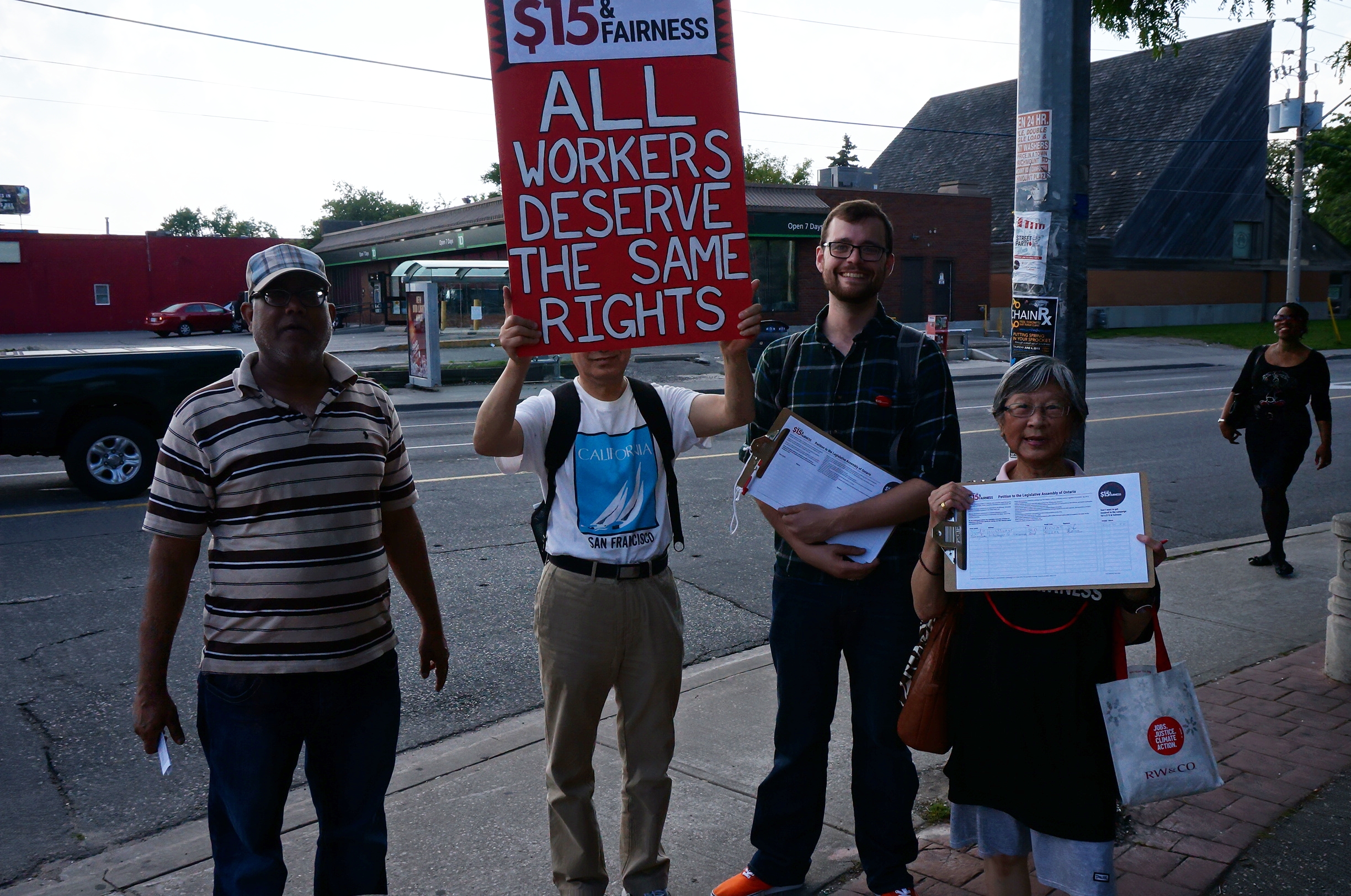 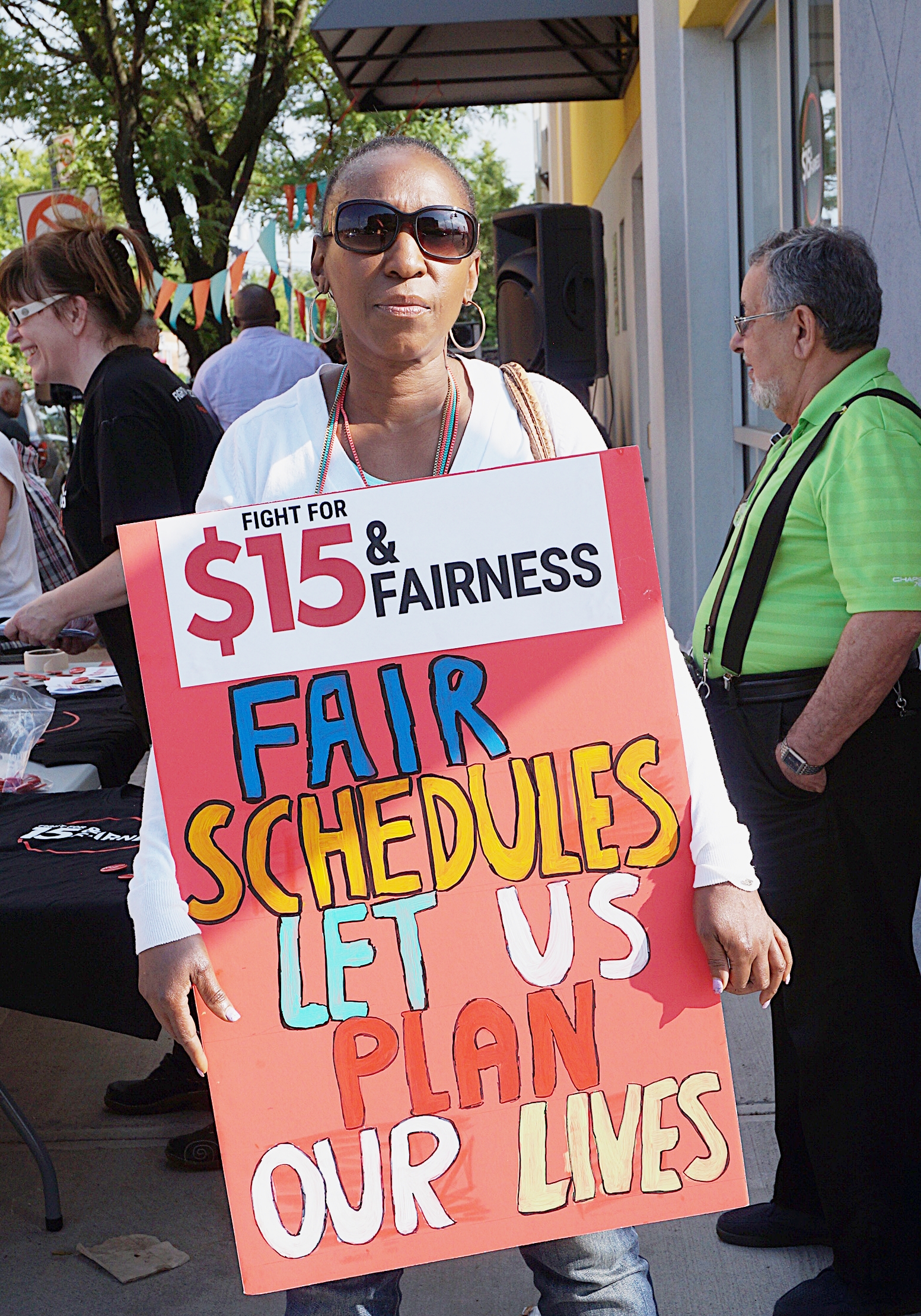 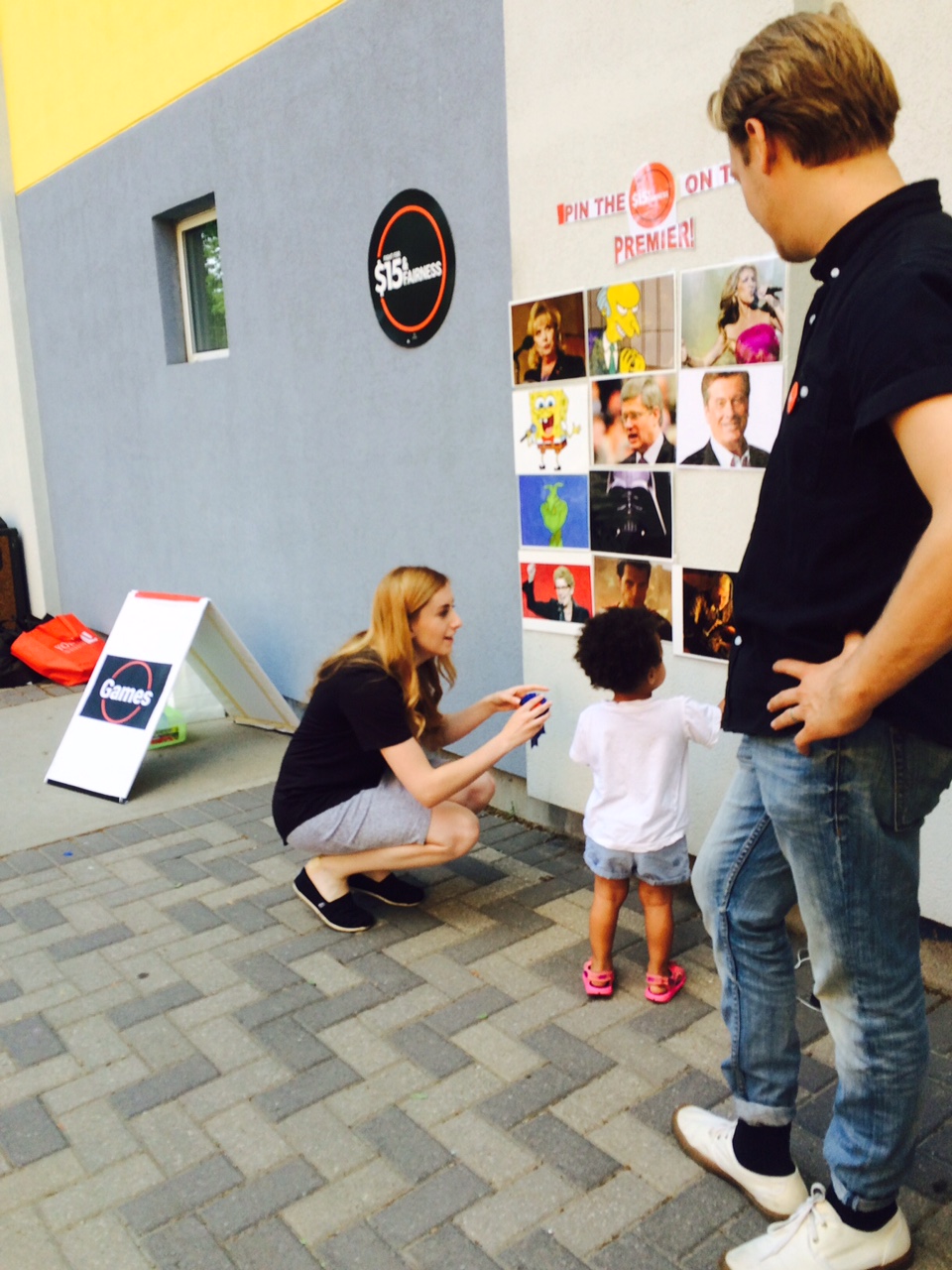 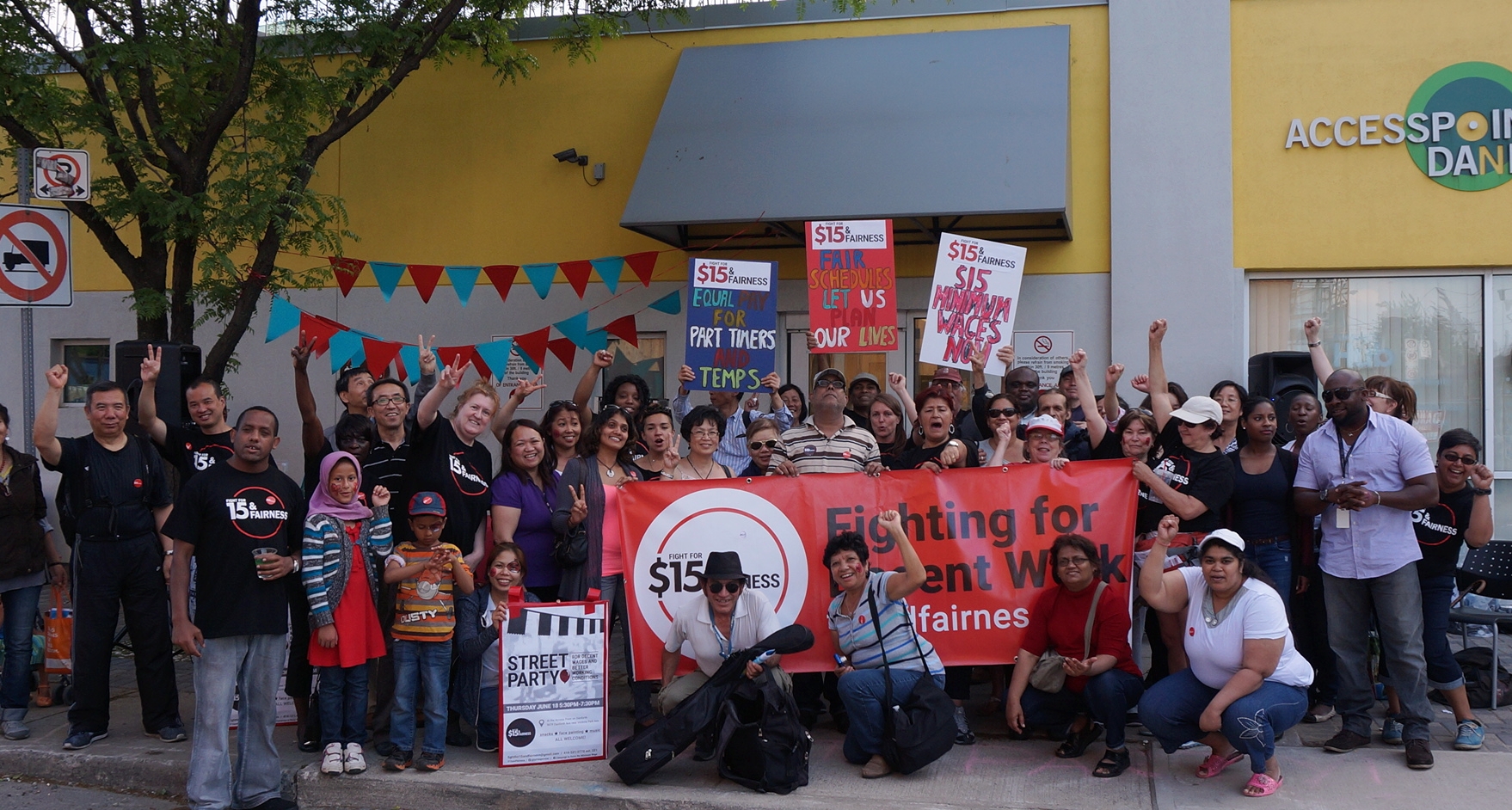 On July 5, the Fight for $15 & Fairness will be joining the march for Jobs, Justice, & the Climate. Join us and thousands of others to demand a clean-energy future built on values of social justice and good jobs. Meet us at 1pm at Queen’s Park. #jobsjusticeclimate