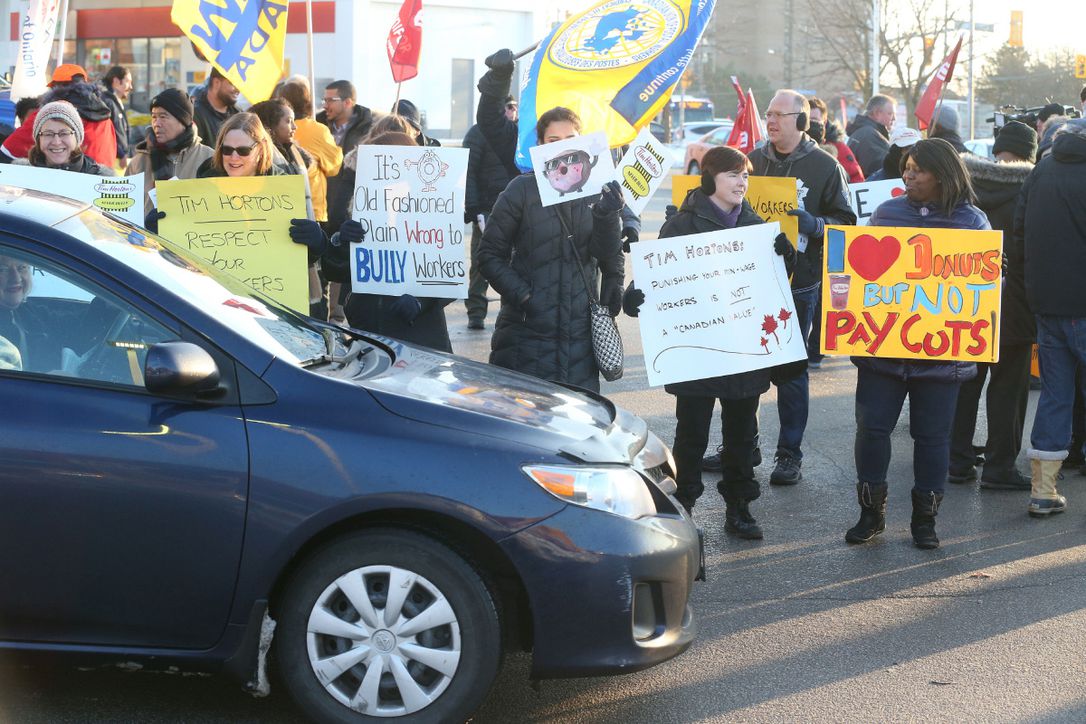 Calls to the Ministry of Labour’s employment standards hotline have soared following sweeping updates to the province’s workplace laws that took effect Jan. 1.

The provincial information centre fielded 26,704 calls from workers with queries about their rights or potential abuses in January of this year, up 60 per cent from 16,742 the previous month, the Star has learned. The volume of enquiries is almost 30 per cent higher than January 2017.

Following the changes, some employers moved to offset the increased labour costs by eliminating paid breaks or increasing workers’ contributions for benefits — most notably at Tim Hortons restaurants in Cobourg owned by Jeri Horton-Joyce and Ron Joyce Jr., the children of the chain’s founders.

As previously reported by the Star, workers at the Markham and Lawrence location in Scarborough were told they could no longer accept tips or have paid breaks.

“I’m heartened that people are calling in because that means they are engaged and aware about the changes and feel a sense of empowerment. I think that’s fantastic,” said Pam Frache, provincial co-ordinator of the Fight for $15 & Fairness movement that pushed for many of the changes contained in Bill 148.

“It also shows that employers are either unaware or are not implementing the changes.”

The province’s new emergency leave provisions appeared to represent the most significant jump in worker calls, according to the ministry data requested by the Star. The hotline received around 420 calls on the subject in January 2017, but received almost 2,400 this January. Minimum-wage queries also more than doubled from 345 to 819.

As part of its workplace updates, the Ministry of Labour is doubling is complement of employment standards officers, hiring 175 more inspectors and bumping up its capacity to proactively inspect up to 10 per cent of the province’s workplaces.

Enforcement was a key issue raised in an extensive government-commissioned report on workplace conditions in Ontario, which noted that the province faced “serious” and extensive problems enforcing basic employment rights.

Last year, the government’s rate of recovery when individual workers filed claims for stolen wages and other entitlements was around one-third, according to data obtained by the Star through a Freedom of Information request. Since 2013, this low recovery rate has resulted in some $38 million in missing wages for workers.

The recovery rate for proactive inspections was almost 100 per cent.

“Unfortunately, it appears some employers are abandoning the spirit of this legislation and some may even be doing more than that,” Labour Minister Kevin Flynn said following reports of employers scaling back entitlements in response to the province-wide wage hike.

But Frache said many small employers have embraced the changes.

“The opposition tends to come from the large corporations that rely most heavily on minimum-wage workers and, ironically, those are some of the most profitable entities.

“The contextual piece is to remember that most small businesses already pay above minimum wage because they rely on a stable workforce. They simply can’t cope with high turnover,” she added.

“Millions of workers are benefiting from these changes, it’s just too bad there’s a few high profile bad apples.”

With files from Robert Benzie