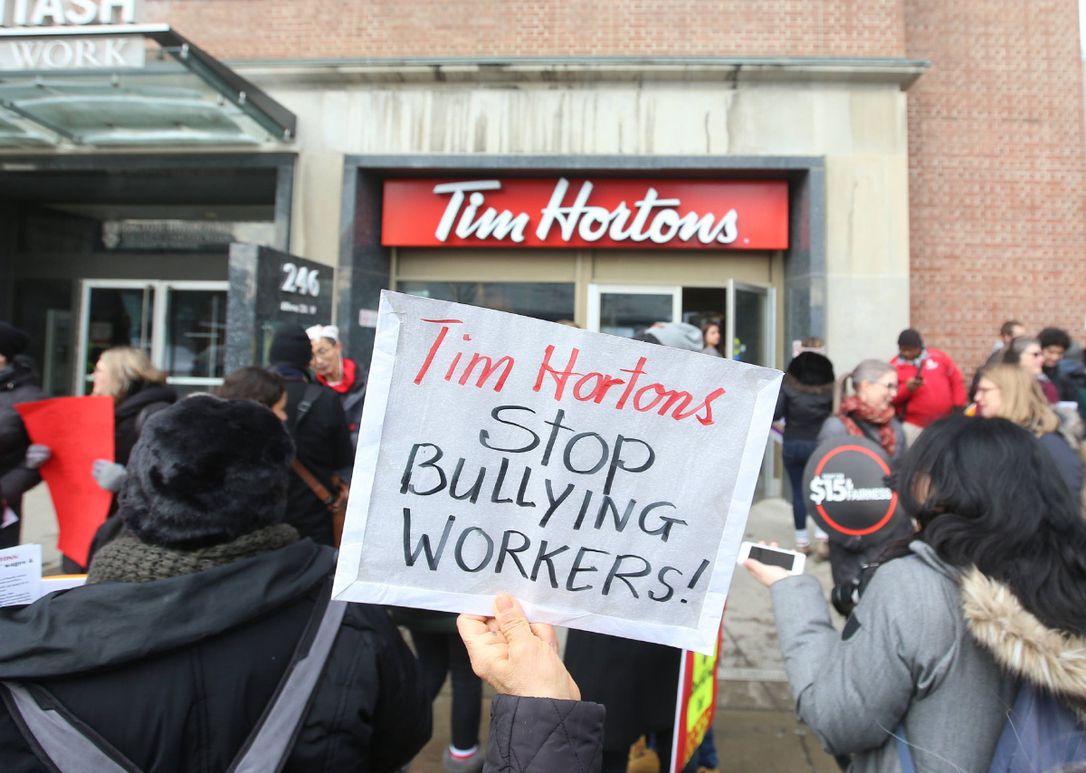 There’s a missing ingredient in the battle still brewing at Tim Hortons.

Never mind the conventional narrative of family-owned businesses versus their vulnerable employees. It has more to do with the economic power imbalance when business (big and small) wages war against minimum wage workers who aren’t organized to fight back.

By organized, I mean unionized.

The protective power of unions has been missing from much of the sound and fury over a bunch of Tim Hortons outlets clawing back paid breaks and tips. This isn’t about ideology but practicality.

For the reality is that government can’t legislate against every injustice, the media can’t cover every story, and the public has a limited attention span for Timmies’ double-double troubles. We can’t count on people to protest outside every fast food franchise or supermarket that bullies its workers, or rely on Facebook “likes” as a virtual show of solidarity.

When Ontario raised the minimum wage to $14 on Jan. 1, a number of Tim Hortons franchises took the path of least resistance by announcing that paid breaks would henceforth be unpaid. Lamentable yet legal — a new law required better wages, so they worsened working conditions.

We live in a culture where everyone likes to play the victim. Heirs to the original Timmies fortune played the small family-owned business card, while Tim Hortons headquarters tried to cast them as “rogue” franchise operators, but there is plenty of guilt to go around.

Canada’s iconic coffee shop is a franchise behemoth controlled by RBI, a monolithic multinational based in Brazil. Everyone at Tim Hortons can try stickhandling the issue after facing off against their own workers, but they still come off as cheapskates — multinational and familial.

And they’re not alone. The T&T Supermarket chain also eliminated paid breaks just ahead of the minimum wage hike to make itself “more competitive.”

The Loblaw-owned company ultimately backed down, as my colleague Sara Mojtehedzadeh reported this month. Perhaps the giant food conglomerate had second thoughts after Loblaw CEO Galen G. Weston first raised the spectre of “a significant set of financial headwinds” from any wage increase.

Note that Weston didn’t dare claw back any paid breaks in its flagship Loblaw supermarkets, doubtless because they are unionized — and the United Food and Commercial Workers would have fought back hard. Unfortunately, a unionization drive at a T&T warehouse fell short a few years ago, leaving employees unprotected when push came to shove more recently.

If employers trample on their rights, minimum wage workers have to stand up for themselves — by joining a union that can push back against companies that push the envelope on pay packets. This isn’t a polemic about the perfection of unions, merely their utility. (Full disclosure — the Toronto Star newsroom is represented by Unifor.)

For all their faults, unions exercise vigilance on behalf of their members, even when outmuscled by powerful employers. Unions can keep a watchful eye on abuses, enable members to file grievances, and tap into the collective resources of the larger labour movement.

It’s not just about the minimum wage.

Sears Canada workers will see their pensions reduced after the company left their plan underfunded while paying out billions in shareholder dividends — again, lamentable yet legal. Unfortunately, major unions that could have organized tens of thousands of Sears workers across the country — and pressured the company into maintaining its pension obligations in good faith — were largely unsuccessful in the face of the company’s strong anti-union tactics.

Even at big centralized employers like Sears or T&T, organizing drives are harder than ever. Amid widespread anti-union sentiment, many workers believe they can look out for themselves — until they can’t.

At smaller, decentralized locations, signing up union members is even tougher. The labour movement appealed to the Ontario government to permit union certification of entire restaurant franchise chains, but the Liberals compromised with legislation allowing only commonly owned franchisee clusters to be organized as one bargaining unit.

A missed opportunity, albeit unsurprising given the ferocious resistance from employers. The Liberals were picking their battles, calculating that a minimum wage hike and other workplace reforms would create less opposition going into an election.

But the subsequent public outcry over the Tim Hortons controversy suggests an opportunity to go further with labour reforms. Not just by improving working conditions, but also unionization conditions that help level the playing field.