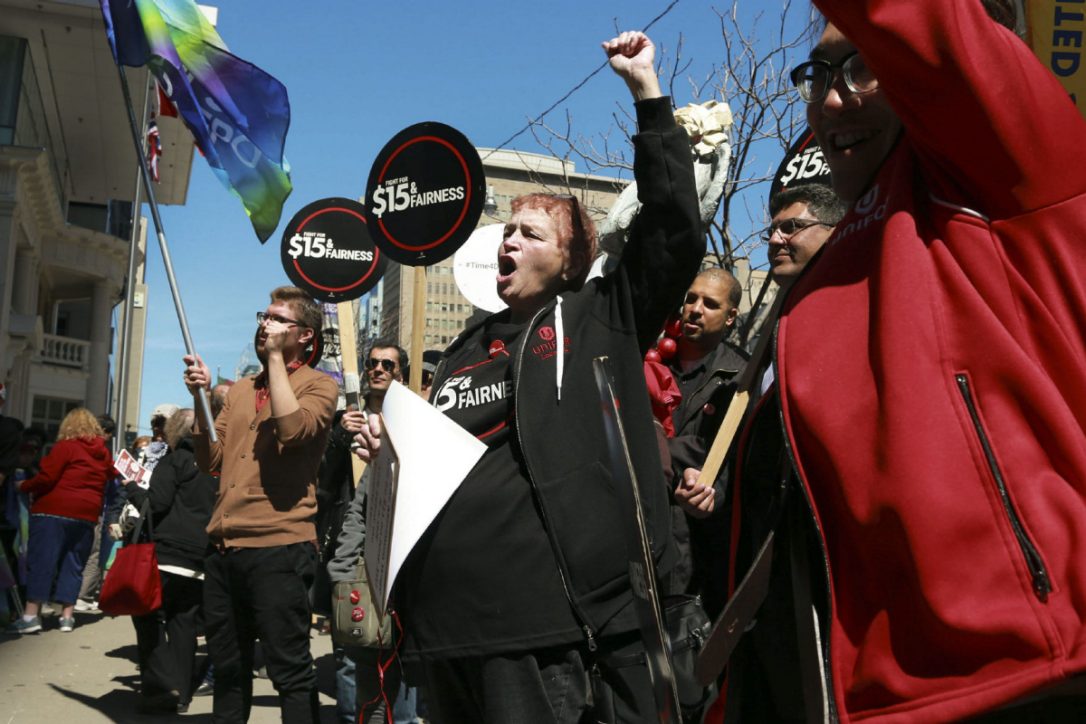 A high-stakes dispute over the minimum wage is a testament to how our elites play policy games with the lives of working people.

The ideological divide is not just right versus left and business versus labour. At its core, the disagreement pits economists against themselves.

We have dialed up the minimum wage to maximum volume, leaving low-wage earners as a political afterthought. Dangling on the poverty line at $11.40 an hour.

On one side, big bank economists and business mouthpieces are warning of an economic cataclysm if Ontario hikes the minimum wage to $14 an hour next year, and by another $1 the year after that. TD Bank and the Ontario Chamber of Commerce are leading the charge, relying on muscular rhetoric disguised as rigorous research.

The chamber’s predilection for alarmist predictions is entirely predictable, coming from a group whose president is a former Progressive Conservative candidate, whose vice-president worked in the PC leader’s office, and whose members want to be dragged kicking and screaming into the age of the living wage. They joined up with other like-minded groups to hire a dubiously dismal economic forecasting group that claimed 185,000 jobs were “at risk.”

TD Bank came up with its own estimate of 50,000 to 150,000 jobs lost by the end of the decade, noting its own “rough estimates are consistent” with those of others — even though they aren’t. The impact will be “acerbated” by the speed of the wage hikes, the bank added gravely.

(That conclusion sent me speedily to my dictionary. Acerbated is defined as exasperated — not to be confused with exacerbated, which means worsen. This is why muddled bank economists leave me puzzled.)

On the other side, university economists and big labour have led a counterattack in defence of an increase. They point out that business is relying excessively on econometric modelling at a time when the model is badly broken.

Recent empirical research shows the impact of past wage hikes has been relatively neutral, retrospective proof that is surely more persuasive than speculative modelling that tries to predict the future with improbable precision.

Caught in the middle is the legislature’s Financial Accountability Office (FAO), which warned that 50,000 jobs could be at stake from paying poor people more. The FAO is supposed to keep a close eye on the government’s financial accounting and accountability — notably “the province’s finances, including the budget, and trends in the provincial and national economies.” Why the FAO, on its own initiative, opted to speculate on minimum-wage policy — as opposed to fiscal facts — is an interesting question for a fledgling organization that has repeatedly been proven wrong in its deficit predictions.

The bigger problem with the FAO and TD researchers is that they recycle outdated data and unreliable models to forecast typhoons on the horizon, ignoring the evidence in front of them. What does the rest of the economic world really think will happen, plus or minus?

“One constituency that has mostly declined to join this chorus of boos has been professional economists,” noted a distinguished group of them in a recent commentary (full disclosure — one of the authors, Lars Osberg, taught me labour economics at university). They cite recent hikes in the U.S. with “no credible evidence that this clear trend in labour policy is hurting job creation.”

The reason? It turns out that high-wage employers benefit from reduced turnover, lower recruitment costs, and greater productivity. That’s why more than 40 economists also signed an open letter cautioning against “fear-mongering that is out of line with the latest economic research” that shows a negligible “disemployment” effect.

“There is no consensus against raising the minimum wage among our profession; indeed, the emerging understanding is quite the opposite,” they conclude.

At a time when the provincial unemployment rate has plunged to the lowest level in 16 years — 5.8 per cent last month — business interests want us to believe that we can’t afford it? To put the doomsday scenarios in perspective, Statistics Canada reported Ontario has gained 154,000 jobs in the past year.

Another bank, RBC, predicts Ontario’s economy will expand “at a rapid clip” after years of strong growth that has led the country and much of the industrialized world. If not now on wages, when?

A New York Times analysis speculated that Target may be “trying to convince consumers that it is a good corporate citizen before lawmakers try to push up the timeline for minimum wage increases.”

Would that our own business sector were wise to those prevailing winds.