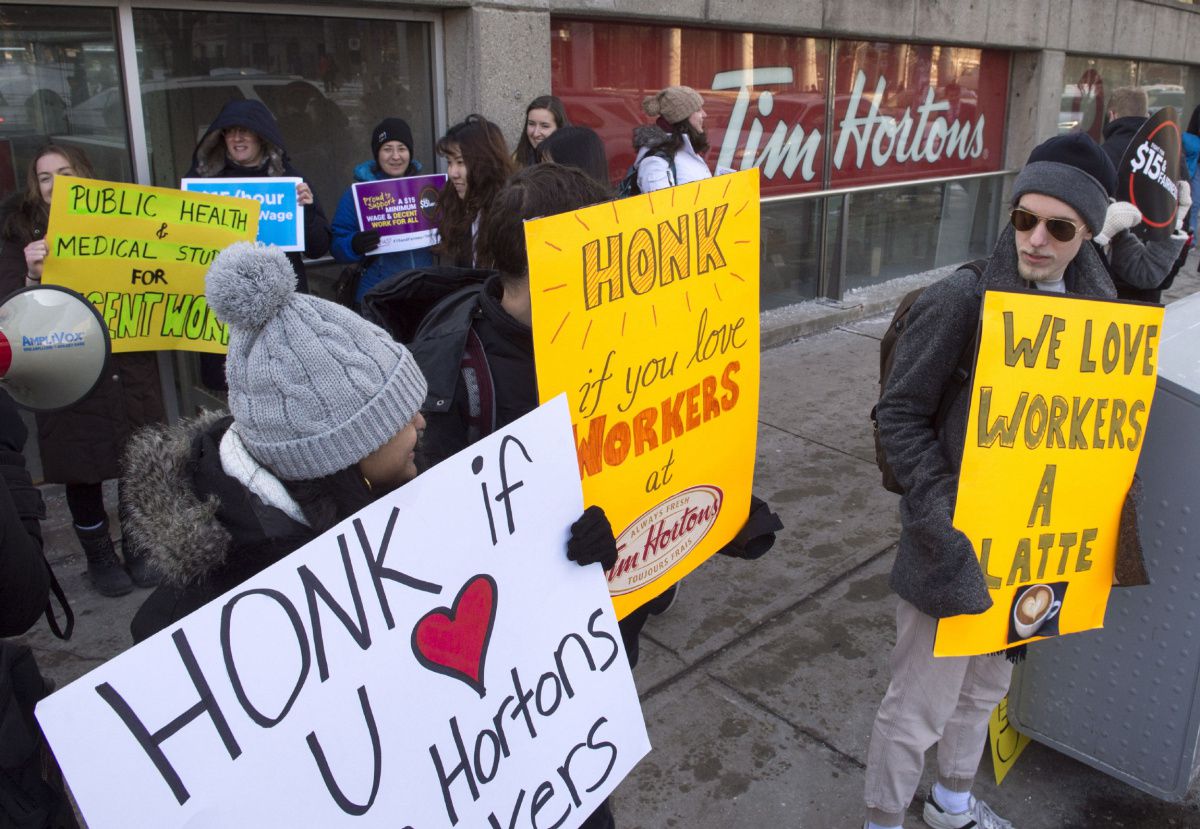 Protesters rallied across Canada calling on Tim Hortons’ franchisees and their parent company Restaurant Brands International to reverse claw-backs to workers’ benefits, tips and other entitlements — changes implemented at some Ontario locations following a $2.40- hike to the minimum wage.

Demonstrators aimed to gather at 42 Ontario locations Friday, including 20 in Toronto. Eleven more rallies were scheduled to take place across Canada, according to organizers, who belong to the Fight-for-$15 movement, the Ontario Federation of Labour, and the independent advocacy group Lead Now.

Protests from Vancouver to Halifax were pulled together in just four days, said Lead Now campaigner Brittany Smith, following what she describes as an outpouring of support for workers facing slashed breaks and benefits at the country’s most popular coffee chain.

“They have a near religious brand in Canada,” Smith told the Star. “A family-friendly coffee shop for the average worker that takes cares and invests in the communities it serves. I think these punitive attacks on workers fly in the face of the values that it purports to have.”

A crowd of around 30 protesters converged at a Tim Hortons opposite Queen’s Park on Friday afternoon, eliciting rounds of honks from passing vehicles. The rally was marshaled by healthcare providers from the Decent Work and Health Network, which testified in support of the minimum wage increase during the government’s two-year review of workplace legislation.

“As a family physician, the impact of work on health is very clear to me. It’s something I see every day,” said Toronto-based doctor Ritika Goel, a member of the Decent Work and Health Network.

Ontario raised the minimum wage from $11.60 to $14 on Jan. 1. In response, some employers moved to offset the increased labour costs by eliminating paid breaks or increasing workers’ contributions for benefits, including at Tim Hortons restaurants in Cobourg owned by Jeri Horton-Joyce and Ron Joyce Jr., the children of the chain’s founders.

As previously reported by the Star, workers at a Scarborough franchise at Markham and Lawrence were also told they could no longer accept tips or have paid breaks. Last week, labour groups circulated a statement apparently posted by owners of a Whitby franchise that encouraged workers not to vote Liberal because of the wage increase.

Franchisees have asked RBI to increase store prices to offset the wage-hike cost, but the corporate parent has dubbed them a “rogue group,” and claimed that their actions “do not reflect the values of our brand.” RBI also says it considers its franchises to be “operated by small business owners who are responsible for handling all employment matters, including all policies for benefits and wages, for their restaurants.”

The issue has become a flashpoint in the debate over precarious work and how best to address it.

Sweeping labour reforms introduced by the government through Bill 148 were aimed to provide greater protections for low-wage, part-time, and temporary workers and introduced two paid sick days for all Ontarians. But some business groups expressed concern that the measures, in particular the minimum wage hike, would be prohibitively costly for companies.

A group of 53 Canadian economists endorsed Ontario’s decision to hike the minimum wage, arguing that the bulk of academic research conducted on wage increases in other jurisdictions have not resulted in significant job losses or price increases.

“This is not just a flash-in-the-pan action,” Deena Ladd of the Worker’s Action Centre at Friday’s protest. “This actually a deeper issue of people really supporting the minimum wage and supporting better rights and working conditions.”

Ladd said the Tim Hortons’ backlash pointed to the need for further action, such as enacting protections in Ontario employment law for “concerted activity,” and against unjust dismissal. (“Concerted activity” is a term used to describe groups of employees coming together, with or without a union, to improve pay and working conditions.)

According to the Great White North Franchisee Association, which represents around half of Timmies’ franchisees in Canada, the cost of implementing minimum wage hikes is $6,968 per employee. The Association said the average franchise has around 35 employees, resulting in “$243,889 a year off a franchisee’s bottom line.”

“Stating your disdain for the actions of ‘rogue’ franchise owners is not enough to resolve this unfortunate situation,” the letter said.

Total sales for Tim Hortons franchises in 2016 were $6.4 billion, according to its latest year-end report.