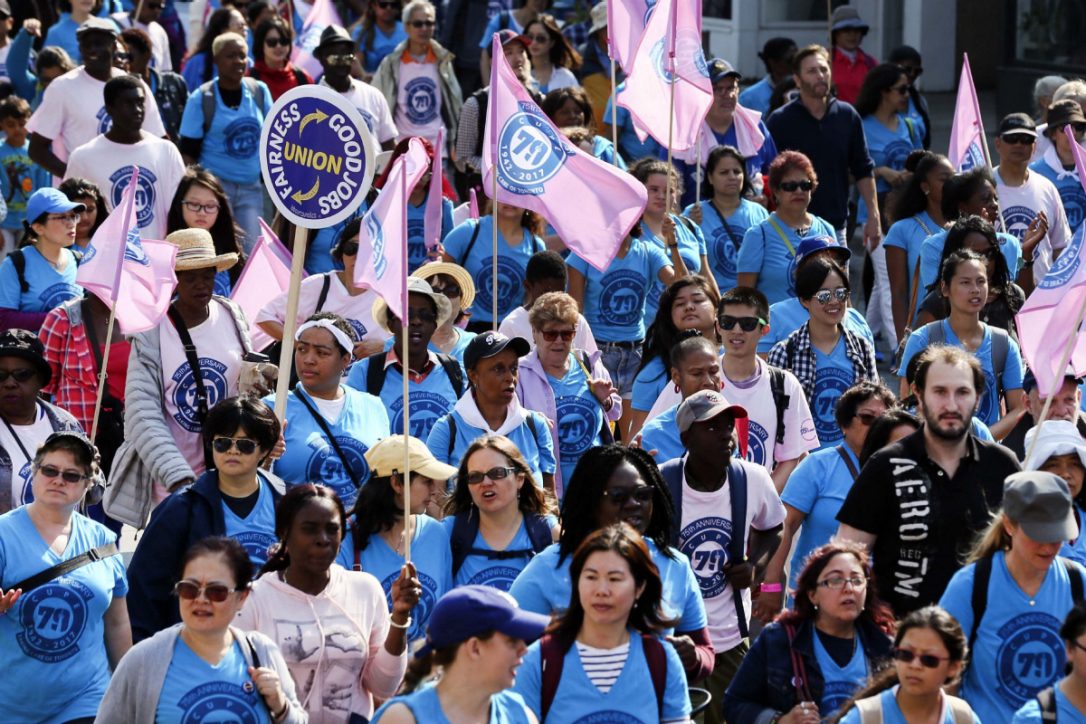 A new bill that constitutes the most sweeping updates to the province’s workplace standards in two decades is now law.

The bill follows years of advocacy from workers’ rights groups who have long pointed to inadequate protections for Ontario’s growing body of precarious workers, as well as two years of research and public consultation conducted by two independent labour experts. In the GTA, around half of all workers face insecurity on the job, according to a study by United Way and McMaster University.

“It’s showing that when workers speak up and organize, it’s possible to have better working conditions,” said Navi Aujla, a former temp agency worker and an organizer for the Fight for $15 movement in Brampton, a group that lobbied for many of the changes in the new bill.

“Finally our voices are starting to be heard.”

Bill 148 will mandate equal pay for temp and part-time workers who are doing the same job as full-time employees, and make it easier for temp agency workers and homecare and building services workers to join a union.

All workers will now have access to 10 personal emergency leave days, including at least two paid sick days — extending coverage to some 1.6 million Ontarians who previously did not have the right to a single, unpaid day off when ill.

Employees who are with a company for five years will be entitled to three weeks vacation. The legislation also provides new scheduling protections, including the right to three hours of pay if their shift is cancelled within 48 hours of start time, although the provisions fall short of demands from worker advocates for two weeks scheduling notice.

Crucially, the new measures also include ramped up enforcement, including 175 new inspectors, which will double the ministry’s capacity and enable it to investigate one in 10 workplaces across the province. As previously highlighted by the Star, poor compliance with ministry orders has left thousands of workers out-of-pocket, even when inspectors find they are owed money. In total, it is estimated that workers have lost $28 million to poor enforcement.

The legislation has caused concern for some in the business community who have warned it will create job losses and increase the cost of consumer goods.

“The government did not consult on the $15 minimum wage before the bill was introduced and repeatedly ignored our calls for an economic impact analysis to determine whether businesses can weather a whopping 32 per cent minimum wage increase in a mere 15 months,” said Julie Kwiecinski, the Canadian Federation of Independent Business, director of provincial affairs for Ontario.

Premier Kathleen Wynne, who missed Wednesday’s vote because she is en route to China on a trade mission, tweeted that “we did it.”

“This is why I’m in politics — because I know we can build a fairer, better Ontario for everyone. The fight for $15 isn’t over, but today was a big step,” said Wynne.

At Queen’s Park, Labour Minister Kevin Flynn said he was “very disappointed” the Progressive Conservatives did not vote with the Liberals and New Democrats to pass the legislation unanimously.

“The dignity and the respect that comes along with earning a paycheque is something I would have thought all three parties would have supported,” said Flynn, noting Tory Leader Patrick Brown skipped the vote.

“I really think it was a slap in the face to working people in the province. I expected better,” he said, rejecting the argument that higher wages would hurt the economy.

Tory MPP John Yakabuski (Renfrew-Nipissing-Pembroke) warned the minimum wage will be a campaign issue in the June 7, 2018 election.

Alarmed by forecasts of “catastrophic” job losses due to the higher wage, the Tories have said they will slow the implementation of the minimum wage to $15.

If Brown is elected premier next spring, the wage would rise 25 cents annually until reaching $15 in 2022. By contrast, the Liberals predict it should be $15.90-an-hour by that year once it is tied to the inflation rate.

A study by the province’s economic watchdog, the Financial Accountability Office, estimates that around 50,000 people could lose their jobs due to the minimum wage increase.

Other economists have endorsed the wage hike, noting that when adjusted for inflation, Ontario’s $11.60 minimum wage is barely $1 higher than its value in 1977 — even though workers’ average productivity has risen by 40 per cent over the same period.

“Some of these basic kinds of improvements are going to make a huge difference in workers’ lives,” said Deena Ladd of the Toronto-based Workers’ Action Centre, adding she hopes to see further improvements including more security for temp agency workers.

A Star investigation this year revealed that the number of temp agency workers in Ontario is on the rise, and that such workers are significantly more likely to be injured on the job. The new bill does not make workplaces who hire temps liable for their injuries, which critics say is a significant financial incentive to use temps.

“Those workers are incredibly vulnerable in the workplace and we need to make sure they are fully protected so their lives are not in danger when they go to work,” Ladd said.