Toronto Star: Students want Ontario to scrap special minimum wage that is lower than that paid to adults 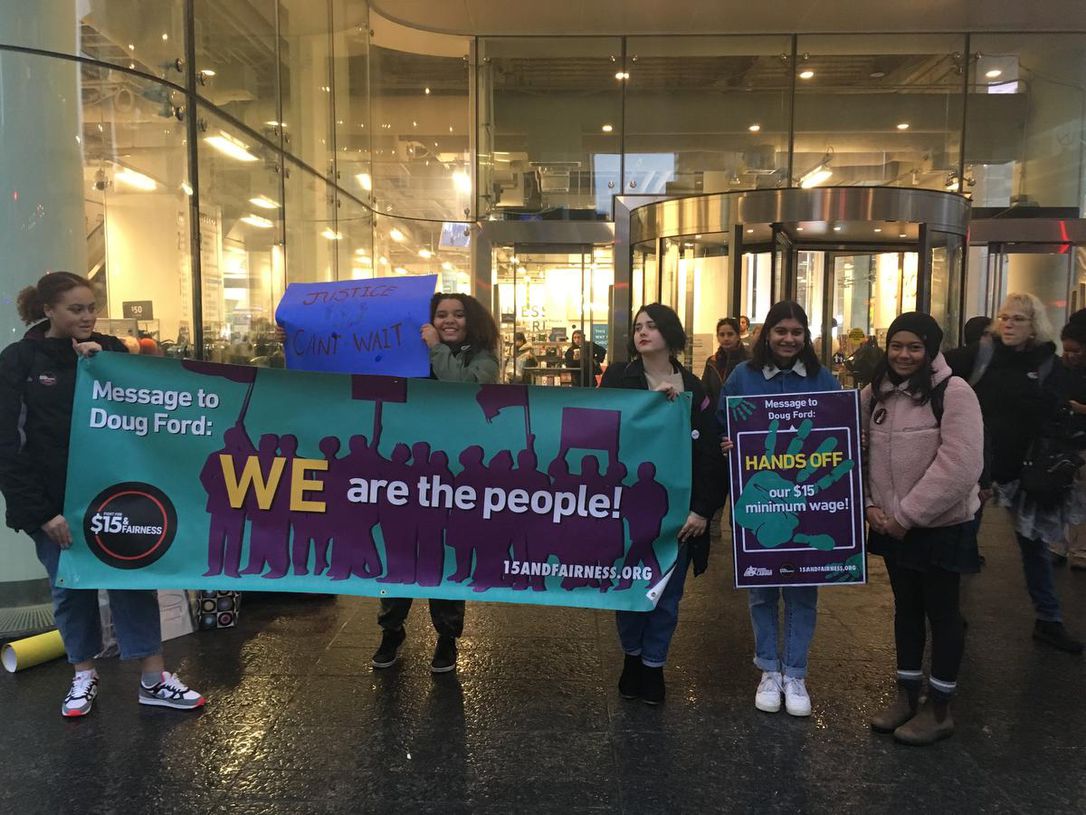 Ontario is the only province in Canada to have a minimum wage for young workers that is lower than the minimum wage for adults — and Grade 12 student Taamara Thanaraj isn’t happy that a scheduled increase to that rate may soon be frozen.

She was one of a group of 30 students who gathered under drizzly skies at Yonge and Bloor Sts. Friday to protest Bill 47, provincial legislation that, if passed, will result in significant rollbacks to labour protections recently enacted including increases to the general minimum wage and the subminimum wage for students.

“Right now, minimum wage is not a livable wage for a lot of people, especially for parents. That’s why a lot of young people do work,” said Thanaraj, who attends the Scarborough Academy of Technological, Environmental and Computer Education at William Arnot Porter Collegiate Institute.

Bill 47 will keep the general minimum wage at $14 an hour, but cancel an increase to $15 scheduled for January. It will also cancel a scheduled bump from $13.15 to $14.10 an hour for students’ minimum wage.

Employers in Ontario are not required to pay the general minimum wage to students under 18 who work part-time during school or work during a school break or the summer holidays.

In 2017, an extensive report written by two independent experts for the government’s two-year Changing Workplace Review noted that 59 per cent of young people in that category reported making less than the general minimum wage, and this resulted in $25 million in lost wages a year for the province’s student employees.

“Ontario is the only province in Canada with a lower minimum wage for students, and those (provinces) that previously had a lower rate eliminated them years ago,” the report said.

“In our view, the impact of the provision is discriminatory, and, although the Human Rights Code effectively permits discrimination of those under 18, the Charter of Rights and Freedoms does not.”

Thanaraj said she helped organize Friday’s protest to advocate for young people — and to send a message to government that they deserve equal treatment.

“The government is assuming that because you’re a younger person, you don’t have financial responsiblities. But that’s such a generalization, because most young people are saving up for post-secondary opportunities,” she said.

According to the Ministry of Labour’s policy manual, the rationale for the exemption is “to facilitate the employment of younger persons,” who may struggle to compete for jobs with older students with more work experience.

Several business groups opposed removing the wage differential. These included the Ontario Restaurant Hotel & Motel Association, which said, in its submission, to the review that requiring employers to pay students under 18 the general minimum wage “will have a huge impact on the overall business” and “will greatly affect youth employment.”

Documents obtained by the Star through a Freedom of Information request show Morley Gunderson, the CIBC Chair in Youth Employment at the University of Toronto, advised the review experts that “the evidence suggests that the sky will not fall in if the student subminimum (wage) is raised, although it may reduce their employment, perhaps by two per cent or so.”

The review recommended that government eliminate the lower student minimum wage over a three-year period, which the Liberals’ Bill 148 did not do. It did increase the base rate.

“Even if we’re not old enough to vote, that doesn’t mean we don’t understand our civic rights. Because we’re old enough to work,” added Thanaraj.

“It’s about more than just a $1 raise; it’s a fight against poverty and discrimination in the workplace.”