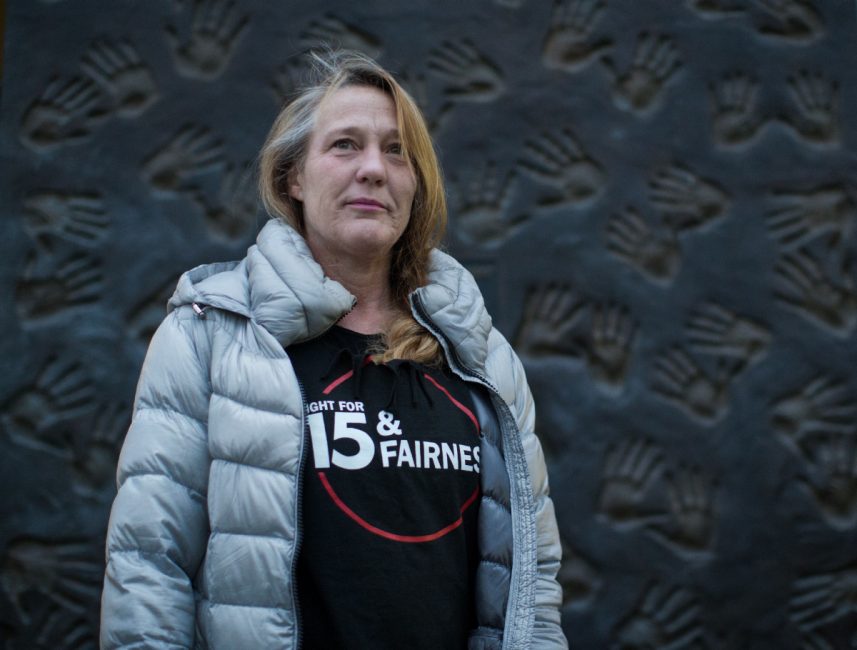 As the passage of Bill 148 nears completion, workers worry that a loophole in new protections will leave them vulnerable to unpredictable schedules.

Ina Labuschagne describes her working life as akin to a juggling act: three part-time jobs plus an assortment of gigs on the side to make ends meet: loading trucks, gardening, snow shovelling. It’s a common state of being, she says, in her Regent Park community.

Now, she’s worried the solution is just out of reach.

As lawmakers at Queen’s Park prepare to finalize updates to the province’s employment laws, advocates say new scheduling protections contained in Bill 148 — while laudable — do not go far enough.

“Fair scheduling is so important for your mental health,” says Labuschagne. “To know what hours you’re going to work, that would be good.”

Currently, the bill would give workers the right to refuse a shift if it is assigned with less than four days’ notice. It would also require employers to pay workers for three hours of work if their shift is cancelled within 48 hours of its start time. Exceptions would be limited to emergencies beyond the employer’s control — like fires, power outages or storms.

But a recent amendment, inserted after its first reading, could pave the way for other exemptions to be set out through government regulation for employers to avoid paying cancellation wages.

That makes the provision ripe for abuse, according to Yogendra Shakya, senior research scientist at Access Alliance Multicultural Health and Community Services, who is also calling for the new legislation to mandate two weeks’ scheduling notice for all workers.

“Strong evidence shows (scheduling) is the second most stressful thing for workers — after not having a stable contract.”

“It leads to higher rates of work-life conflict and that factor is in turn associated with a range of social and health impacts including depression, anxiety, loss of appetite, bad eating habits and low quality of family relationships,” he adds.

Research conducted by United Way and McMaster University shows, for example, that even high earners with less secure jobs are twice as likely as those in secure employment to report that an unpredictable work schedule has a negative impact on family life.

Michael Speers, a spokesperson for Ontario’s Minister of Labour, said the amendment to Bill 148’s cancellation pay provisions will “give the government the ability to monitor the scheduling provisions and rebalance it, if needed, through future regulation.”

As previously reported by the Star, erratic scheduling is a growing problem for precarious workers. According to a report by the Canadian Centre for Policy Alternatives based on 2014 Statistics Canada data, almost one in three workers in Ontario now work in jobs where their hours vary from week to week.

Some employer associations such as the Ontario Chamber of Commerce have pointed to the need for flexible scheduling to maintain competitiveness. In its submissions to the government’s so called Changing Workplaces Review the Retail Council of Canada said a cancellation wage for workers would help ensure employees have “sufficient certainty about the hours of work expected from them and the income that they may expect in turn,” but added that the mandatory two weeks’ notice period shouldn’t be “a hard and fast rule.”

The latter measure has been implemented in some jurisdictions south of the border — for example in San Francisco, where large employers must provide two weeks notice to workers. Speers said Ontario has charted a different course — opting for provisions that benefit “the entire province, and the solution has been tailored to be workable in more sectors.”

Shakya believes broad and robust scheduling protections are good for everyone.

“There’s actually strong evidence that fair and stable scheduling is not just good for workers’ health and well being, it’s also good for workplace productivity,” said Shakya, citing research conducted by institutions like the University of Chicago and Harvard Business School.

“These investments are actually beneficial to workplace productivity and employee morale and quality of service. It’s good for workers’ health and it’s good for business as well.”

Labuschagne, who volunteers on top of her three jobs as an organizer for the Fight for $15 movement that lobbies for a living wage, says she’s thrilled that Bill 148 would raise the minimum hourly rate to $15 by 2019. But she says if working hours are unpredictable, financial planning will remain a source of anxiety in her community.

“When you’re trying to juggle part-time jobs you’re constantly worried about scheduling — am I going to be able to be on this shift? Do I have enough time to make it from here to there?”

“It’s just stressful. I get headaches, I don’t sleep well, I’m anxious,” she adds. “Having a stable job would just be so great.”