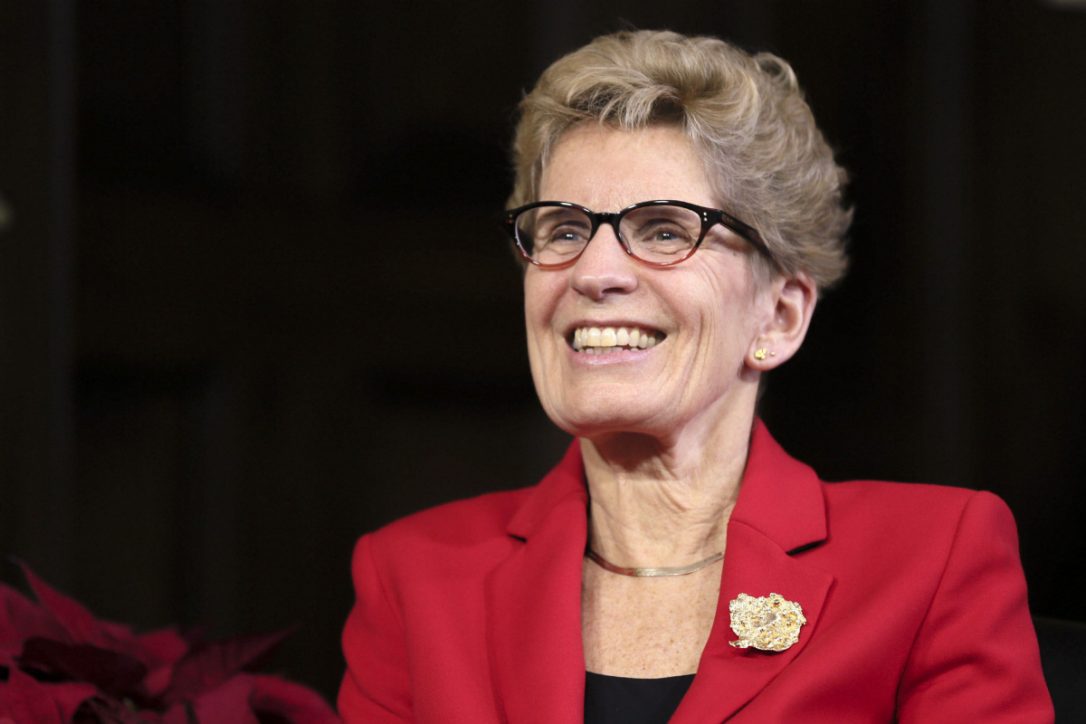 By Sara Mojtehedzadeh and Robert Benzie

Premier Kathleen Wynne made the announcement Tuesday as part of a major overhaul of provincial laws. Minimum wage will jump from $11.40 an hour to $14 next year.

Millions of Ontario’s most vulnerable workers are getting a raise.

Wynne made the announcement Tuesday as part of a major overhaul of provincial laws that also includes measures to make it easier for workers to join a union and increasing annual paid vacation from two weeks to three weeks.

Reading from a teleprompter and surrounded by a hand-picked group of labour activists and workers from different sectors in a slick TV talk-show-like setting, the premier boasted the wage hike is “the largest increase in our province’s history.”

“Right now, 10 per cent of workers in our province earn the minimum wage of $11.40. Thirty per cent earn less than $15 an hour. That’s millions of people, many of them supporting a family on a wage that just doesn’t go far enough,” she said to cheers from the assembled crowd at the campaign-style event.

After that, wage increases will again be tied to the rate of inflation.

NDP Leader Andrea Horwath, who has been crusading for a $15-an-hour minimum wage, said it is good news for workers.

But Horwath accused the Liberals of cynical electioneering “for their own political fortunes.”

Progressive Conservative Leader Patrick Brown refused to say if he would allow the minimum wage to rise to $15-an-hour if his party wins the June 7, 2018 election.

“Everyone wants to have higher wages, but when a worker wakes up in the morning they need a job,” said Brown, demanding the government produce a “cost-benefit analysis” to justify the hike.

The Canadian Federation of Independent Business warned “small businesses, who don’t share the larger profit margins of big business, will be forced to make difficult choices, including cutting hours and jobs.”

“We are shocked and appalled that the government is broadsiding small business owners with a 32 per cent increase in the minimum wage within only one-and-a-half years,” said the federation’s provincial director Julie Kwiecinski.

But Toronto Mayor John Tory, long a proponent of a rising minimum wage, said “it seems like they have struck a reasonable balance” between the need of workers and of business.

The Liberal government will also guarantee that workers earn equal pay for equal work, regardless of their full-time, part-time or temporary employee status.

“We will ensure that part-time workers receive equal pay for equal work. The reality is that more companies are choosing to hire part-time employees. That in itself is not a bad thing,” said Wynne.

“But it has in some cases created an unfair workplace in which some are paid less than others who do exactly the same job. Paying people the same wage for the same work is the very essence of fairness,” she said.

“And that is what we as a government will insist on from companies and other organizations doing business in our province.”

As well, the minimum vacation entitlements for employees with five or more years at a company will rise from two weeks annually to three.

“You know, Ontario is behind other provinces in guaranteeing better vacation rights. It’s time to do what’s right and what’s fair,” the premier said.

The government will also “establish fairer rules for scheduling — rules that give greater certainty to workers while maintaining flexibility for employers.”

“For instance, your employer will now be required to pay you three hours’ wages if they cancel your shift with less than 48 hours’ notice.”

Currently, firms are only penalized if they cancel shifts after an employee has arrived for work.

Wynne’s government will also give workers the right to take up to 10 days of personal emergency leave each year, two of them paid.

Right now, there is no guaranteed paid leave for those coping with a family emergency.

Enforcement will also be strengthened, including the addition of 150 new workplace inspectors — doubling the Ministry of Labour’s current complement.

“We heard that enforcement is key to making this work — so we’re stepping that up,” said Wynne.

“We will modernize the rules around creating a union. That includes the extension of card-based certification to three vulnerable sectors — temporary workers, building services workers and home- and community-care workers.”

“The government has demonstrated that it has heard the concerns of Ontario’s most vulnerable workers and is now committed to taking action,” said Dias, whose union represents 160,000 Ontario workers, including those at the Toronto Star.

Canadian Labour Congress President Hassan Yussuff noted “the Ontario economy is strong and these changes will only make it stronger by supporting workers and their families to make ends meet, decreasing turnover and increasing productivity.”

Labour Minister Kevin Flynn said the reforms stem from the 419-page Changing Workplaces Review, which was released last week after two years of consultation and research.

That review by special advisers C. Michael Mitchell and John C. Murray made 173 recommendations on improving work conditions in Ontario.

While the government won’t enact all of them, Flynn promised the legislation would be introduced this week and enshrined in law by 2018.

The Ontario Chamber of Commerce expressed concern about what it called “unproven sweeping reforms” and warned of “unintended consequences, including job losses, rising consumer costs and economic hardship.”

Rabbi Shalom Schachter, one of 200 faith leaders across the province who have endorsed legislative change to protect vulnerable leaders, called the reforms’ consultation process “extensive.”

“Workers have waited long enough,” he said. “It’s time to have those changes implemented today.”