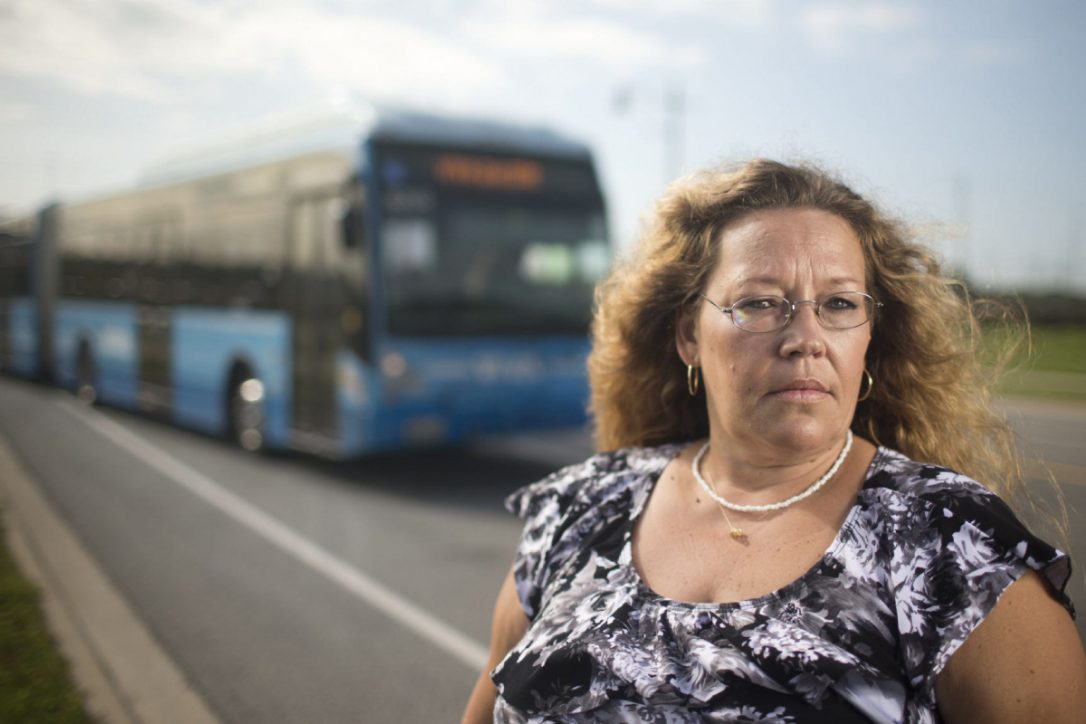 To Newmarket commuters, it was an early morning bus ride like any other: routine, safe and uneventful.

It could have ended very differently.

Their driver, mother-of-three Kathy Breen, had the route down pat. She says she had a perfect driving record. She had more than eight years’ experience with York Region Transit.

She was also losing her job. And as she drove down Yonge St. that June morning, she says, it was all she could do to pull into Finch station safely as she lived through what doctors would later tell her was a nervous breakdown.

“I was sitting in the driver’s room, and they thought I was having a heart attack and called the ambulance,” she recalls.

This is the face of a practice known as contract flipping, a legal loophole in Ontario’s labour law that leaves workers in the lurch. Critics say it allows employers to continually sub-contract out services, changing providers every few years to keep wages low, purge unwanted employees and derail collective agreements.

Every time a contract flips, the entire workforce is terminated. They must reapply for their old jobs, sometimes at lower wages or with fewer hours. Or, as in the case of Kathy Breen, they are simply let go.

At York Region Transit, a total of three contracts have flipped in the past five years — resulting in numerous job losses and constant insecurity, according to employees and unions.

Ann-Marie Carroll, of York Region Transit, said new contracts awarded to private companies were all a minimum of 10 years long, although they can be terminated if workers go on extended strikes. She said that even when contracts changed, wages and entitlements remained “comparable.”

“It’s a unionized environment, so (workers) do have their unions that they can go to if they have any issues,” she told the Star.

But Breen says the experience caused “indescribable” stress. The impact, she fears, is felt by more than just workers.

“It was a huge distraction when you had to do a very, very important job and concentrate,” she says of her experience.

The Star has previously highlighted the impact on workers’ livelihoods and public safety caused by contract flipping at the federally regulated Pearson International Airport, where a similar loophole in federal labour laws allows the practice to continue.

At York Region Transit, Breen and her colleagues were told in January that their employer, Veolia, had lost its contract to Tok Transit. Breen, the sole breadwinner in her home, reapplied to work with the new company. She got an interview. She completed a driving test, with “excellent” results, she says her instructor told her. She paid $50 for a police check.

But she was never called back. Instead, she received a letter informing her she was not qualified for the position.

“Meanwhile, brand new drivers who had a week’s transit experience, no prior experience, got hired on,” she claims.

A spokesperson for Tok Transit said the company couldn’t comment on job losses following its takeover of the contract.

Breen says she has no idea why she was not selected for re-hire. She had worked as the health and safety rep for her union, but says that shouldn’t have been a problem because the relationship with her former employer had been amicable.

But in a recent submission to the provincial government, which is currently reviewing its labour laws, the Amalgamated Transit Union said contract flipping leaves workers “with little protection from discrimination in hiring by the new contractor on the basis of union activism or human rights grounds.”

“If transit work is to be a permanent service offered to the public, why should transit workers be treated like a temporary workforce?” added ATU, which lost its right to represent the former Veolia workers when York Region flipped the contract to Tok Transit.

As for Breen, she feels she’s lost out in a race to the bottom. She’s been unable to find work since June — leaving her struggling to make rent and take care of her family.

“You love your job. You bust your backside all these years,” she says. “And then the region causes its own unemployment rate to go up.”