Toronto Observer: 15 and Fairness leader: fight not over for minimum wage in Ontario 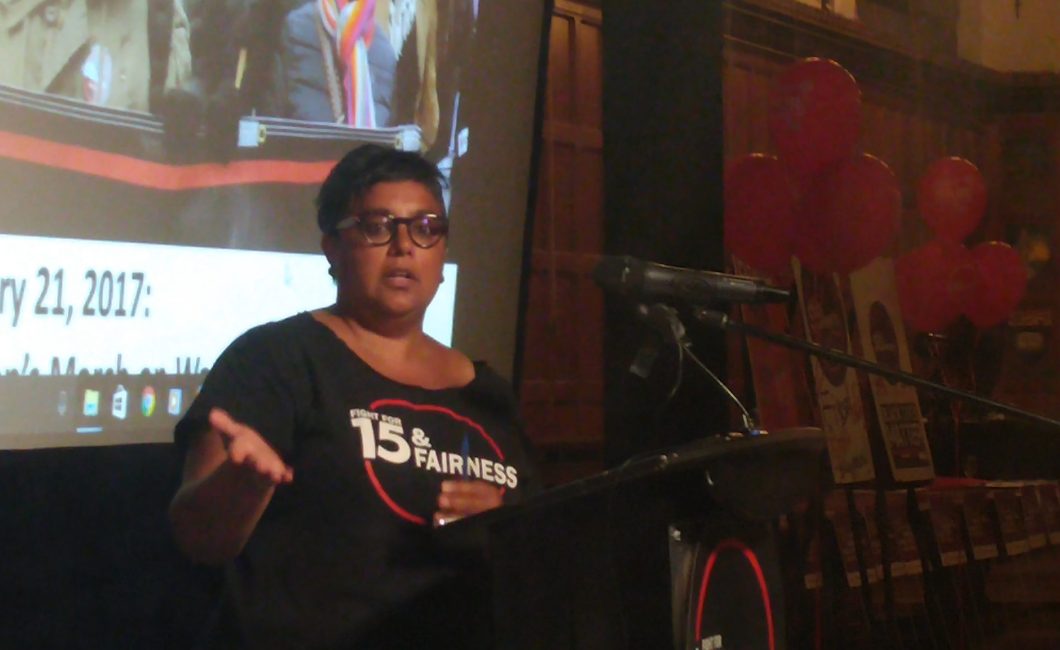 Long-time activist Deena Ladd cautioned her cohorts in the Fight for 15 and Fairness movement against complacency even as they appear to be achieving their objectives.

The Ontario Liberal government has promised to bring in a $15 minimum wage, as well as better benefits and protections for workers. As the provincial legislative assembly deliberates Bill 148 – Fair Workplaces, Better Jobs Act, Ladd urged her comrades Friday night to step up their activism.

Ladd, coordinator for the Workers’ Action Centre in Toronto, was addressing a packed meeting hall at the University of Toronto, as part of the 15 and Fairness campaign, a broad coalition of trade unions, workers and activists.

“This is the time to get our communities organized, we need to be working every day, every weekend, until we win these changes,” she said, calling on her comrades to organize and spread their message through real life engagement, social media conversations, letters to community newspapers and calls to local radio channels.

Even if Bill 148 passes, as expected – it is currently in its second reading – the movement could be derailed by a new government repealing the act after provincial elections in June 2018, Ladd warned.

Ladd said that it was critical to win the public debate about minimum wage now and send a message to the business community and the politicians, and prevent their movement from being derailed.

The challenge from the business community

Ladd castigated the business community, exemplified by the Ontario Chamber of Commerce, which has been vocal in its opposition to the proposed minimum wage hike.

Ladd cited research including the endorsement by 53 economists in Canada, who said in June that raising the minimum wage “makes good economic sense.”

A broad range of issues

Aside from the public event on Friday, the events at the U of T over the weekend included workshops and meetings that discussed a wide range of issues related to The Fight for 15 and Fairness.

“This has never been about one piece of legislation,” Ladd said. “This is about building a strong social justice movement, that can take on the issues that our communities face whether it’s racism, Islamophobia, wage theft, temp agency work, discrimination because of how you are hired.”