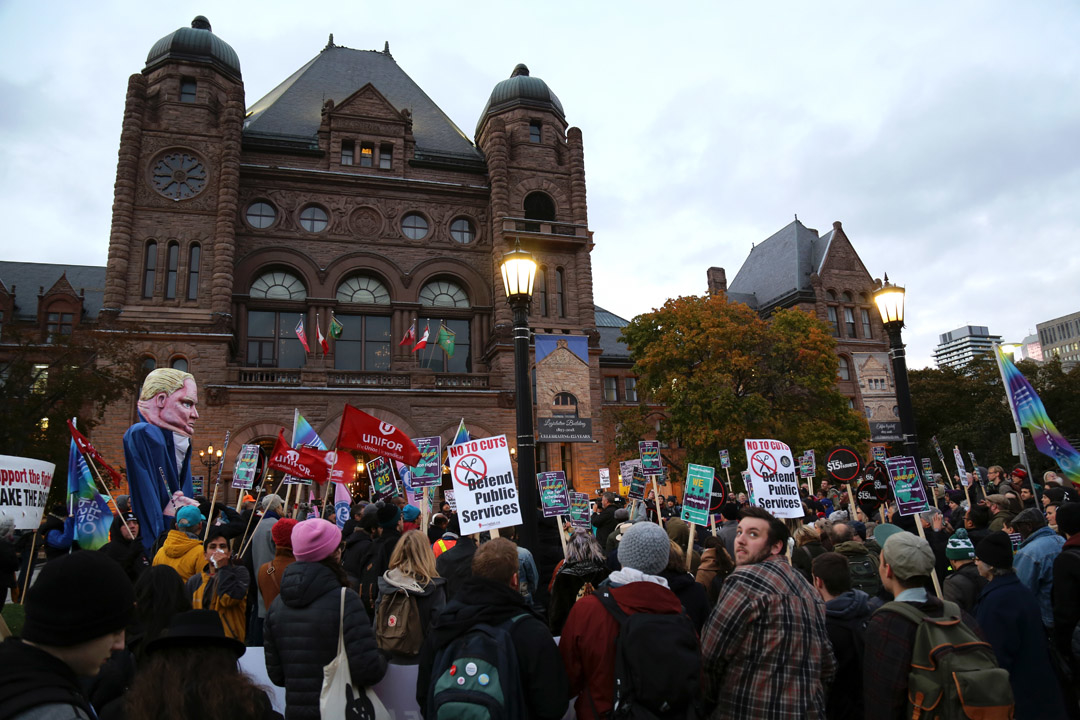 Premier Doug Ford’s government introduced legislation on October 23 to repeal parts of Bill 148 — the law that raised Ontario’s minimum wage from $11.25 to $14 an hour and strengthened workplace laws related to paid sick leave, equal pay for equal work, and other workers’ rights.

The University of Toronto has come under fire from local labour unions for its membership in the Ontario Chamber of Commerce (OCC), an independent, non-partisan business lobby group that has been a vocal supporter of repealing the bill. As a corporate member, U of T does not have voting rights but it can still influence the policy agenda.

Bill 148, titled the “Fairer Workplaces, Better Jobs Act 2017,” was introduced by the previous Liberal government in November 2017. The bill was set to increase the minimum wage to $15 an hour in January 2019, but Ford’s government has capped minimum wage at the current $14 an hour.

The OCC has taken a strong stance against the bill. The group cites claims of unintended price inflation on goods and services, as well as cutbacks on staffing and benefits by small businesses, among its grievances.

“In the months following its introduction, the Fair Jobs, Better Workplaces Act has had a visible impact on the Consumer Price Index, resulting in price increases for everyday consumer goods and services for every family in Ontario,” read an OCC press release from October 23.

Rocco Rossi, President and CEO of the OCC, said in a statement that “as Ontario’s business advocate, our position has always been clear: Bill 148 was too much, too fast. The compounding labour reforms and unintended consequences came at too high a cost to Ontario’s economy.”

The Ford government’s plans to repeal parts of Bill 148 have been met with strong pushback. On October 23, Ontario Labour Minister Laurie Scott’s office was broken into and vandalized, and the words “Attack Workers We Fight Back $15” were spraypainted on the walls outside her office.

Labour unions have been especially vocal in their opposition to the seemingly imminent repeal of Bill 148. Emergency rallies were held across Ontario over the past week in response to Ford’s plans.

One rally was held in downtown Toronto on October 24 in front of the offices of the Ministry of Labour. Local labour groups, including the Ontario Public Service Employees Union (OPSEU) and UFCW Local 175 and 633 were out in force. Groups held signs with messages of “$15 and fairness,” and cheers included “Hey Ford — Stop your hypocrisy! Fairness means democracy!”

“We are so very glad we were able to negotiate $15 an hour rate effective October 1, 2017 with the University of Toronto,” wrote Allan James, President of CUPE 3261, in an email. “We need a living wage, but $15 was a start. We don’t understand how anyone can afford to work in Toronto at this rate of pay.”

Members of CUPE 3902 also criticized the university’s membership in the OCC.

“As a [member] of the Chamber of Commerce, The University of Toronto is partially responsible for the lobbying of Big Business which led to this repeal,” read an email statement from Jess Taylor, Chair of CUPE 3902.

“This is a grave disappointment,” Taylor said.

The university’s next steps

U of T increased its minimum wage to $15 in January to coincide with the anticipated raise mandated by Bill 148.

“Earlier this year, the University took a leadership role on this issue and increased the minimum rate of pay for most non-union casual employees to $15 an hour,” said Elizabeth Church, a U of T spokesperson. “The $15-an-hour wage is consistent with the rates of our unionized casual staff.”

The university has no plans to cap its minimum rate of pay.