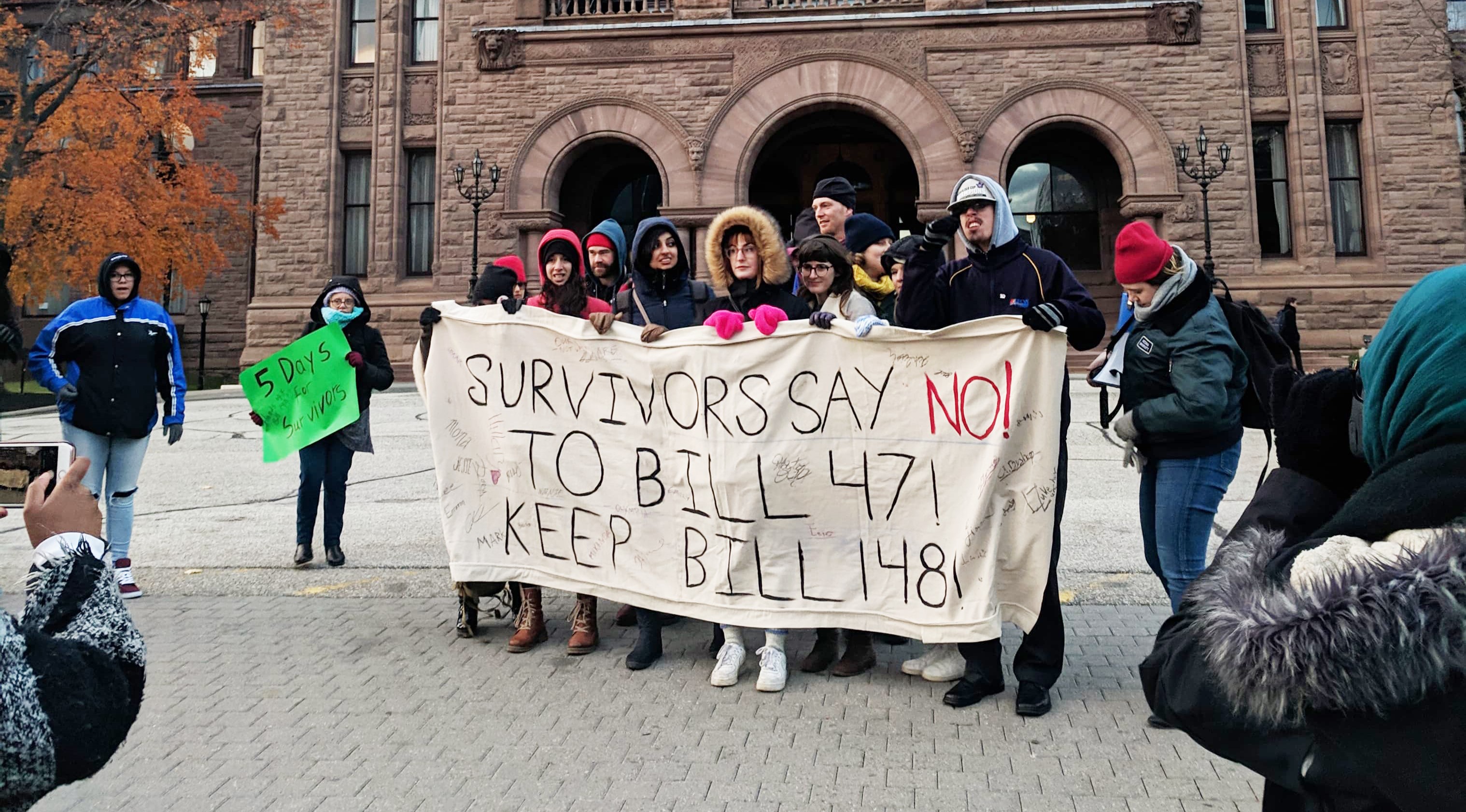 On November 10 at 4 pm, the 5 Days for Survivors: March for Work Rights for Survivors of Sexual Violence gathered in front of the Legislative Assembly of Ontario to march for the retention of Bill 148, the Fair Workplaces, Better Jobs Act.

Bill 148 establishes various workplace rights and protections, including an increased minimum wage, easier access to a greater number of personal emergency leave days regardless of workplace size, ten days of leave in cases of exposure to sexual or domestic violence, and equal pay for workers performing equal work.

In October of this year, Doug Ford’s Progressive Conservative government began consideration of Bill 47, the Making Ontario Open for Business Act. This legislation will repeal significant sections of Bill 148, including a halt to the rising minimum wage, which will be subjected to annual inflation adjustments, and reductions on personal emergency leave days.

Currently, workers employed for a minimum of 13 weeks have access to two categories of leave: domestic or sexual violence leave, and personal emergency leave. For each, employees are granted up to ten individual days of leave annually, with five days paid under domestic or sexual violence leave, and two paid under personal emergency leave.

According to Bill 47, personal emergency leave days will be repealed in order to “establish separate entitlements to sick leave, family responsibility leave and bereavement leave.” Employees under the considered Bill 47 will receive three days of sick leave, three days of family responsibility leave, and two days of bereavement leave annually, all unpaid.

Bill 47 does not address domestic sexual violence leave days. However, the 5 Days event page claims if Bill 47 is passed, “many of the other rights in the workplace that survivors need such as higher wages, equal pay and control over work schedules are at risk.” Event organizers argue, “We need to link and connect all forms of violence [to] build a strong movement that protects us in all aspects of our lives.”

Katie Bishop, a first-time organizer, created the 5 Days march to draw awareness to the current features of Bill 148 as well as the projected changes of Bill 47. Driven by personal experience, Bishop organized the march when she was unable to access five days of paid leave in her workplace as a victim of sexual violence.

The march began in front of the Legislative Assembly of Ontario and travelled south along University Avenue, stopping at the Ontario Immigration building at University and Dundas. Four speakers spoke outside this building: Katie Bishop, a representative for Fight for $15 & Fairness, one working in Trauma Support, and a Consent Educator.

Bishop spoke about the urgency of the issues, discussing her personal experience as a survivor of sexual violence, and the difficulties she faced in accessing the five days of paid leave provisioned by Bill 148.

Fight for 15 and Fairness spoke about the necessity of the rising minimum wage, which in its current state keeps a significant number of minimum wage workers living at the poverty line. The speaker discussed the negations planned by Bill 47, which will revert progressions made by the Fight for 15 and Fairness in favour of the employer over the employee.

Speakers for Trauma Support and Consent Education spoke together about sexual and domestic violence. They discussed the time it takes both for personal recovery from violent trauma, as well as for seeking professional help, an option which is not always easily accessible. Further, domestic violence usually involves moving, which can be complicated by family and conflict. All of this can take significant time, resources, and energy, beyond what is provided by five days of paid leave.

Each speaker discussed the difficulties that those who work minimum wage jobs with unsafe conditions still face, despite the enactment of Bill 148 one year ago. The speakers argued that the negations proposed by Bill 47 will only worsen already difficult conditions and will significantly lessen Ontario workplace safety and equality.

The march concluded at 6  pm with a candlelight vigil for four people who died while employed at Fiera Foods–affiliated factories, one of whom died just this October at a factory in North York, due to unsafe work conditions.

Bill 47 was carried to a second reading as of November 12 and has been referred to the Standing Committee on Finance and Economic Affairs. A November 5 CBC news article stated the bill “is likely to be approved due to the [current] government’s majority.”

The 5 Days march has been one in a string of protests across Ontario that have taken place in the past two months regarding Bill 47.