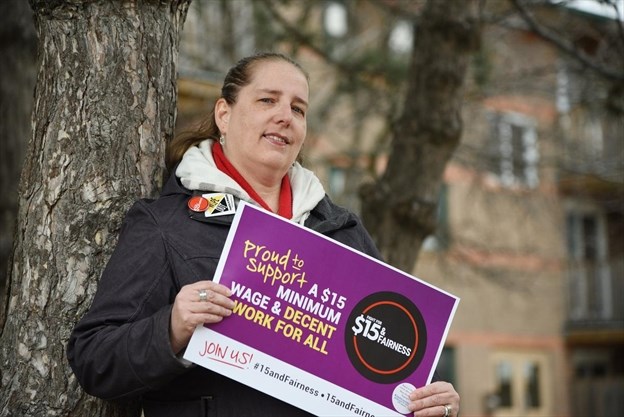 Back in 2015, in a room at the Stokes Seed building on Page Street in St. Catharines, she stood in front of a crowd, feeling awkward, anxious and yet resolutely strong. She clutched a handwritten speech and fought back some serious butterflies that had invaded her abdominal cavity the night before.

In the audience were people interested in the rights of workers. Labour representatives. Lawyers from community legal clinics. Members of the Niagara Poverty Reduction Network. And a representative from the Workers' Action Centre in Toronto.

The gathering was the inaugural meeting of the Niagara Workers' Activist Group, a grassroots organization that exists solely on the currency of passion, commitment and lived experience.

A tiny group that would be part of big changes to labour laws.

Last November, the Ontario government adopted Bill 148, the Fair Workplaces, Better Jobs Act. It made changes to the Employment Standards Act, the Labour Relations Act and the Occupational Health and Safety Act.

Facing a room of strangers, Lisa Britton, 51, told them she had worked hard all her life, but felt deeply betrayed by a fundamental idea she held as truth: That a job would guarantee her a livable wage. It did not. And never did.

Indeed, she has struggled most of her life to pay for the basics such as food and rent even though she was always working. She has worked the gamut of jobs — full-time retail to call centre, and a piecemeal of low-wage, part-time employment to fill in the gaps. She has been on Ontario Works. She has used a food bank.

"I believed a job was the way out of poverty," she told the crowd. "But it's not."

For the longest time, she blamed herself. Until she realized she wasn't alone.

"I left that night with hope," she says.

"I was amazed that there were so many people in area who cared about this."

Deena Ladd, co-ordinator of the Workers' Action Centre, was there too. The meeting came on the heels of the government announcing a review of the labour laws, and Ladd, who has spent some 25 years in the field of labour activism, was set to present her organization's policy brief on changes needed.

When she heard Lisa speak, it was as if her briefing had come alive.

"I felt, have you just read our report?" says Ladd. "It was satisfying for me to see what we pulled together resonated with her experience."

Indeed, as Ladd travelled to communities across Ontario, she heard similar stories: people unable to survive on an $11-and-hour minimum wage; no paid sick days or in workplaces with fewer than 50 employees, no unpaid time off; and generally, no control over work schedules.

At the same time, groups similar to the Niagara Workers' Activist Group were forming across Ontario. Anti-poverty. Fight for $15. Labour action groups. They became places for people in low-wage, precarious jobs to find community and plan action.

"They could talk about their experiences and not feel ashamed," says Ladd. "They came feeling, 'How can I fix myself,' and realized that actually, there are others who find themselves in the same situation when the majority of jobs in their community are part-time and precarious.

"Otherwise, who provides you with that context?"

It was in these groups, existing on threadbare budgets or none at all, run by people who themselves were struggling, that individual experiences fuelled collective change.

Lisa had been working the midnight shift at a gas station and without notice, her hours were cut in half. Four shifts a week, down to two. Then eventually, down to one, on the worst night of the week for her, a Saturday. When she got off work at 7:30 a.m. every Sunday, there were no city buses running so her husband had to get up early to drive across town and pick her up.

She called the Employment Standards Information Centre, frantic, desperate to get her hours back. "I remember crying when I was on the phone with this guy."

Meanwhile, she had joined the Niagara Poverty Reduction Network, an organization dedicated to wiping out poverty with education and advocacy.

During one meeting, frustrated and desperate, she asked if anyone had advice about restoring her shifts. "I was completely at a loss," she told them.

Jennifer Pothier, then from Niagara North Community Legal Assistance suggested that the region needed a workers' action centre, like the one in Toronto. And that's all it took. A small group, including Lisa, Pothier, Sue Hotte from the Niagara Regional Labour Council, Willy Noiles from the Ontario Network of Injured Workers' Groups organized the first town hall style meeting.

And Lisa found herself in a place she never imagined she'd be – in front of a crowd of people, telling her story.

"I couldn't understand for the longest time why it was so hard," she says.

"Why no matter how hard I worked, there was always more month than money."

Her next audience was a collection of government representatives in Hamilton, at one of several public hearings held across the province as Bill 148 was being developed.

In the fall of 2015, this time with typed speech in hand, she told her story. Again.

She talked about working two jobs, at a department store and call centre, just to have enough money to survive. She had to quit the call centre due to migraines, but work at the department store wasn't dependable. "Hours fluctuated wildly according to the season," she said. "My expenses didn't fluctuate with the seasons though. I had to pay the rent and bills anyways. It was stressful and exhausting."

Eventually, even those hours were cut to nine a week.

Her husband worked as a chef and struggled on low wages, until severe back problems forced him to quit.

Then when the hours of Lisa's barely-above-minimum-wage job at the gas station were chopped in half, she felt defeated. "I felt hopeless, like I was disposable," she said.

That meant barely surviving on Ontario Works. "My anxiety was terrible," she says. "I was a mess."

And yet, she persevered. The workers' activist group gave her purpose. Each time she shared her story, the more empowered she felt.

"I wanted to be an agent of change and here I am," she says.

"A tiny little group in Niagara made history. We made it better."

These days, Lisa lives on ODSB – the Ontario Disability Support Benefit — and she co-chairs the group's monthly meetings. She encourages other people working in low-wage, non-unionized, precarious jobs to come out and share their stories.

"Our meetings are a safe place," she says. "There's a seat at the table for everyone who wants it.