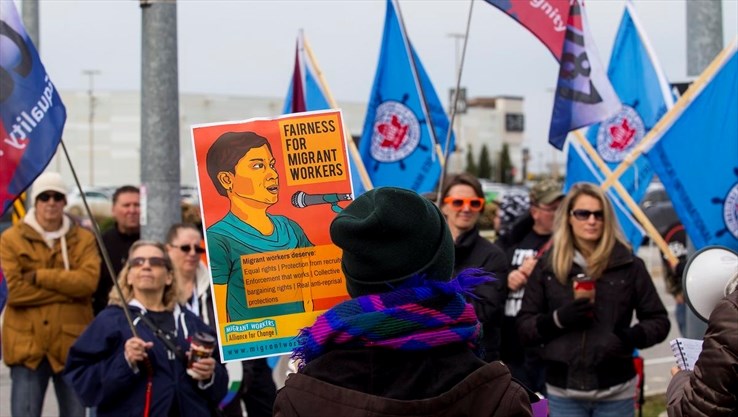 As business and political leaders celebrated the repeal of the former Liberal government's Fair Workplaces Better Jobs Act during the final day of the Ontario Economic Summit on Friday, dozens of Niagara residents gathered to protest the impact the slashed legislation is having on workers.

Carrying Fight for $15 and Fairness picket signs and flags identifying several labour groups, the protesters chanted slogans like "workers united will never be defeated" as the Ontario Chamber of Commerce event drew to a close at the White Oaks conference centre in Niagara-on-the-Lake.

Kyle Hoskin, a member of the Canadian Union of Public Employees Local 1287, said he hastily organized the protest to coincide with a visit from Premier Doug Ford, after the Progressive Conservative government repealed the legislation earlier this week — scrapping the $15 an hour minimum wage that was to come into effect on Jan. 1, while also eliminating other benefits for workers.

Hoskin said the repeal of Bill 148 is the most recent in a series of cuts that have hurt the most vulnerable in the province.

"He (Ford) took away the minimum income project. This was a project that was proving to be turning the tide in the province. It was reducing poverty, getting people to where they truly needed to be. He took away $100 million in school funding for school repairs. Now our kids are sitting in schools that are no longer in shape," he said. "Is that for the people? Who are they representing?"

Niagara Workers Activist Group chair Lisa Britton listed numerous changes that will adversely impact workers, in addition to the lost wage increase — such as the loss of a minimum of three hours of pay for being on-call, the elimination of 10 emergency leave days, and the loss of a provision that prevented employers from requiring a medical note from sick workers.

Kit Andres joined the protesters, speaking for the migrant workers that spend most of the year in Canada, primarily working in local agriculture industry.

Many of them, she said, are paid piecework for their efforts, often resulting in paychecks that fall short of even $14 an hour.

"As part of their contract, piecework is supposed to equal minimum wage if not higher, but we've been seeing that often it's lower. It's not across the board, but it is happening," Andres said.

Niagara Centre MPP Jeff Burch, who joined the protest along with MPP Wayne Gates from Niagara Falls, said "people who can barely make ends meet were counting on a little bit of fairness in their wages and a couple of emergency leave days."

"This government, in addition to all the other things they've done like cancelling mental health spending and cancelling the basic income pilot project, to add insult to injury now they've decided to not go ahead with a very basic minimum wage increase," the NDP representative said.

Gates said if you want to say you're open for business, "you have to include everybody."

He said when 20 per cent of Ontario's children "are going to be hungry tonight," the best way to help them is to ensure their parents are paid enough money to sustain them.

Meanwhile, Gates said the loss of two paid sick days can be "a health and safety issue."

"Do you want your cook or your server to be forced to come to work because they can't afford to take a day off?" he asked.

NDP Official Opposition leader Andrea Horwath discussed her concerns about the repeal of Bill 148 while addressing business leaders from across the province, at the Ontario Economic Summit, Thursday.

Although the NDP's support for the legislation may have put her political party at odds with business leaders, Horwath said the changes were needed to address years of inaction by previous governments.

And told reporters that she suspects "there will be a lot of dialogue in communities around the province about how to try to convince the Ford government that they've gone too far with the wholesale repeal of Bill 148."

Referring to smashed windows at Labour Minister Laurie Scott's constituency office in Lindsay, Horwath urged people to refrain from that kind of activity.

"There's no doubt, and it's understandable, that people are feeling hurt by this. The people are angry, frustrated and worried, but that does not mean that resorting to violence, resorting to breaking the law is something we condone," she said. "There's no cause for that kind of activity."

The Niagara Poverty Reduction Network issued a statement earlier this week in response to the provincial government decision, saying a recent study showed that nearly half of Niagara's workers face employment precarity and uncertainty.

"Precarious employment is on the rise in Ontario, and a recent study done in Niagara showed that nearly 1 in 2 workers faces employment precarity and uncertainty," said the organization's chair Glen Walker.

"The loss of key elements, including two paid sick days and equal pay for equal work, means that workers will continue to struggle to make ends meet and to maintain their health. As well, keeping minimum wage at $14/hour until 2020 means that workers will not be able to keep up with inflation and meet their cost of living needs."

The organization has advocated for a living wage to be provided by Niagara employers, calculated at $17.57 per hour in the region.