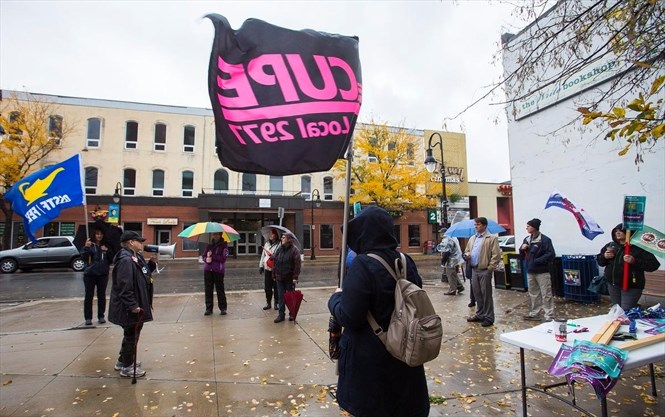 After years of fighting for a $15 minimum wage, members of Niagara Workers Activist Group are now fighting to keep the promised wage hike.

Nearly two years after Ontario's former Liberal government approved Bill 148 increasing the minimum wage to $15 on Jan. 1, 2019, members of the grassroots organization formed that was in 2015 to lobby for a fair wage for workers are resuming their "moral battle."

About two dozen Niagara Workers Activist Group members and labour organization representatives gathered in front of the Ministry of Transportation building on St. Paul Street Monday in one of more than 40 protests that took place across Ontario responding to plans announced earlier this month by Premier Doug Ford to repeal the $15 minimum wage, as well as other benefits such as 10 days of emergency leave, equal pay for part time and contract workers, and leaves of absence for victims of domestic violence.

NWAG co-chair Lisa Britton, who organized the local protest, said numerous people working in Niagara's low-paying service industry jobs will be hard hit if the province follows through with its plans.

She said the PC government "needs to understand that we need the $15 minimum wage — we need Bill 148."

Although cool, rainy weather and "short notice" about the protest was blamed for modest participation, NWAG member Salaeh Waziruddin said there is substantial support for the minimum wage increase.

"Everybody knows somebody who is trying to make it work, trying to make ends meet with minimum wage and it's not working," he said. "When we canvass, we are seeing a lot of support."

Waziruddin said rolling back Bill 148 will be terrible for workers.

"We can't let them do that. We have to organize," he told protesters. "We need to show them that if they take away our minimum wage, we're going to show our maximum rage."

NWAG member Julia Lucas said the provincial government is "threatening to do everything they can to make life harder for the working people."

"A third of the workers in this province are earning minimum wage, so there's a lot at stake. It's important for all of them to be able to pay for all the things that we take for granted," Lucas said. "This is a moral battle."

"This is going to impact every single person in this province," he said. "I think it's important that we protect this bill in its entirety with all of its provisions."

Although public-sector union representatives participated in the protest, Bruce Allen from Unifor Local 199 pointed out that most minimum wage earners work in the private sector.

"Right now I'm going to call on the private sector unions who aren't here — with the exception of me — and say, 'You guys have to step up,'" he said. "The private sector workforce has got to get behind this struggle."

Britton said the group has plans for additional protests, if needed.