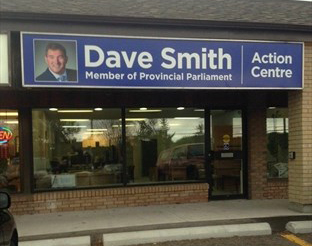 A protest is expected outside Conservative MPP Dave Smith's constituency office on Saturday from 11 a.m. to 1 p.m. over workers' issues such as the halted minimum wage hike.

The protest is being organized by the Ontario Federation of Labour, although it's expected to also include retirees from General Electric who developed cancer from exposure to workplace toxins.

Sue James, a GE retiree and health advocate, said she's been trying to get a follow-up appointment with Smith since he met with the retirees for the first time, in August.

"We want a face-to-face with Smith, who seems to be avoiding us," James said on Friday.

The protest will coincide with the grand opening of Smith's office – which he calls the Action Centre – at 1123 Water St. near Marina Blvd. in the city's north end.

Smith announced in October it would be a barbecue, and he'd offer free hotdogs and burgers.

He wasn't available for an interview Friday. When asked via text how he felt about the protest, he wrote that he will feed anyone who comes to his event.

"We want to encourage everyone who comes – including the protesters – to bring mitts, scarves and hats to donate to Brock Mission and Youth Emergency Shelter," he wrote.

The Ontario Federation of Labour (OFL) stated on social media Friday that the protest was organized in objection to the provincial government's treatment of workers.

The government proposes not to increase the minimum wage to $15 an hour in January as planned by the previous Liberal government, for instance, and to cancel the two paid sick days that workers now get.

The government has also made cuts to the WSIB premiums, the OFL points out – and that concerns James because many GE retirees are seeking compensation for cancer developed from working with toxic chemicals.

James and a group of retirees – many of them sick with cancer – first met with Smith in August to ask him to help them advocate for compensation.

He said at the time he'd do research and update them on his findings in early September, but James has not been able to set a follow-up appointment.

She's spoken to Smith's staff a few times this fall, she said, but they've told her there's no point meeting because he has nothing to report.

"You really do feel he's pushing you aside," James said. "He really should be interested in his constituents and what's important to them."

When asked on Friday to respond to James's assertion that he's brushing off former GE workers, Smith responded (in writing) this way:

"We have an open house tomorrow and everyone is welcome to come."