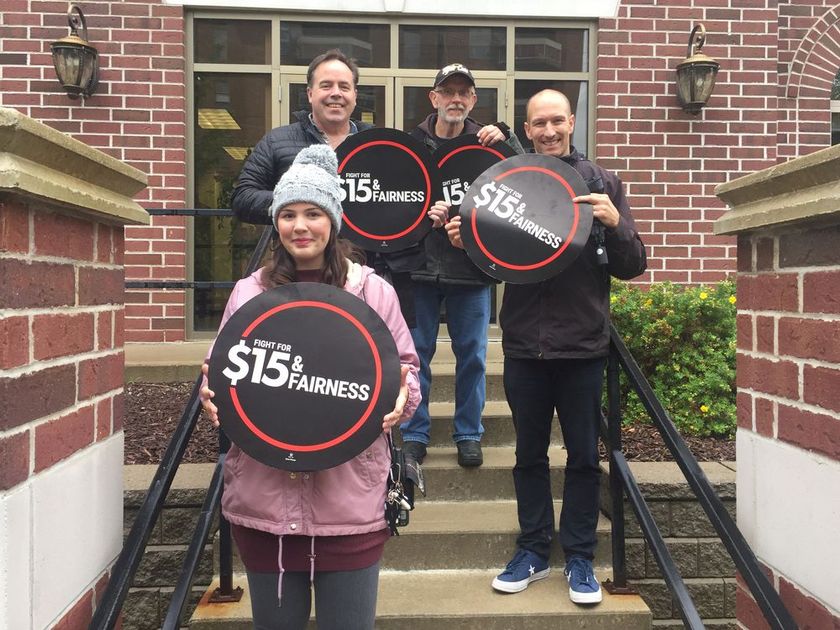 A handful of people gathered Monday at Brantford-Brant MPP Will Bouma’s constituency office to urge the provincial government to back off plans to repeal labour laws.

The Brantford action was among about 50 expected to take part in communities across Ontario in defence of new workers’ rights brought in by Bill 148: Fair Workplaces, Better Jobs Act, including the $15 minimum wage that is scheduled for Jan. 1.

“We think Bill 148 should remain in place,” said Andja Milos, a 26-year-old Laurier Brantford criminology student, who was part of the group at Bouma’s office on Nelson Street.

“I’ve worked for temp agencies and know what that’s like,” she said.

“And there are a lot of people who work full-time hours but only get part-time pay.

“We want fairness in the workplace and that’s what Bill 148 is all about.”

The Fair Workplaces, Better Jobs Act was brought in by the previous Liberal government. Premier Doug Ford has vowed to get rid of the legislation, suggesting it has been a job killer.

Bouma was not at the constituency office on Monday. So, Milos and others provided information to an office employee.

Milos said she is especially concerned about the potential loss of personal emergency leave, a measure she says is vitally important to workers.

“Workers shouldn’t have to go to a lot of trouble to get time off in an emergency,” she said, adding that the law helps part-time workers and others who are struggling with child care or providing care to a family member.

Under existing legislation, employees are entitled to 10 sick days a year, two of them paid.

The province also is being urged to follow through on a planned raise of the minimum wage to $15 an hour.

The “Fight for $15 and fairness” is being supported by labour leaders, including Chris Buckley, president of the Ontario Federation of Labour.

“It’s not too late for Premier Doug Ford and his cabinet to do the right thing and help Ontario workers,” Buckley said in a statement.

For more information about the campaign visit www.15andfairness.org.