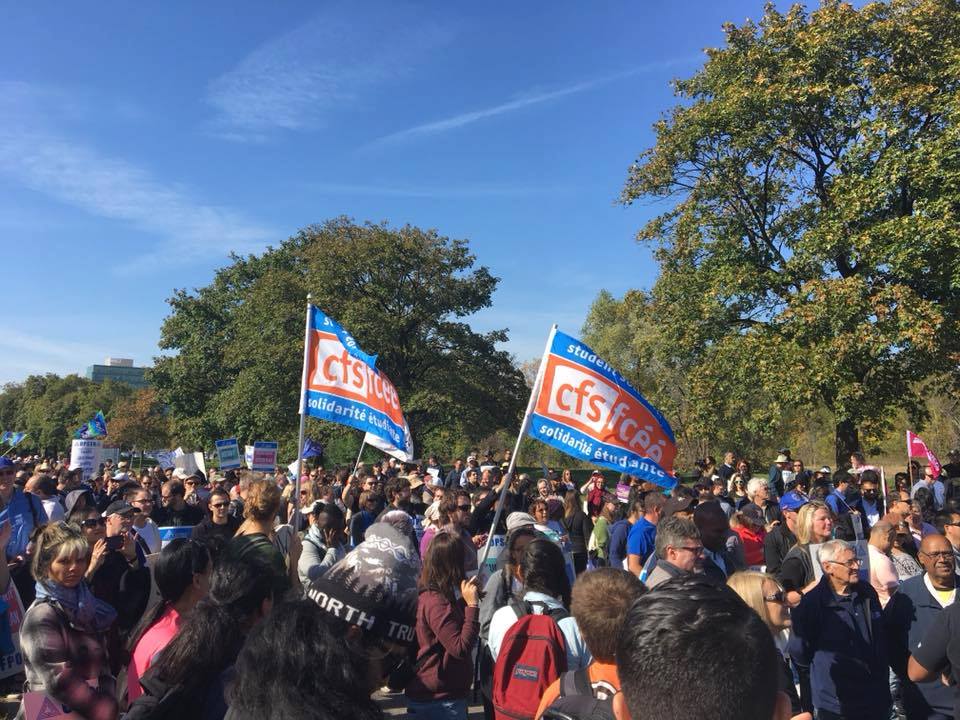 Today is a big day. Migrant workers just won a repeal of the discriminatory 4-and-4 rule that has forced thousands of people to leave or become undocumented over the last year. This victory is just in time for December 18th – International Migrants Day.

While changes are being won at the federal level, so much work needs to be done right here in Ontario. Migrant workers grow food, work in restaurants and factories, and take care of children, the sick and the elderly, but they are denied the most basic rights.

Between now and December 18, send a message to Kevin Flynn, Ontario’s Minister of Labour and Premier Kathleen Wynne to insist that Ontario’s labour laws must change to ensure greater rights for migrant workers.

Migrant caregivers dressed as robots speak at the Queen’s Park Rally for Decent Work on October 1, 2016.

Migrant workers work in some of the most dangerous and difficult jobs in Ontario, and have some of the lowest wages and protections. It’s no accident that many of the industries that are primarily made up of migrant workers are exempted from the Employment Standards Act (ESA).

As a result, migrant workers are denied the most basic protections under the law, such as minimum wages, hours of work, the ability to unionize and more. When one industry is exempted from providing minimum standards, that puts a downward pressure on the working conditions of all workers. This helps explain why today less than 25% of all workers are fully protected by the minimum standards in the ESA.

Migrant workers’ participation in our decent work movement is crucial to our ability to win. Unfortunately, bad employers and some journalists have pitted migrant workers against unemployed and underemployed Ontario workers. Instead of fighting at the bottom of the barrel for bad jobs, we must unite to increase rights for everyone and improve all our working conditions.

TELL THE GOVERNMENT: WE ARE ALL UNITED

As we continue increasing the pressure on our elected officials to deliver decent work legislation in 2017, let’s send a clear message. We are fighting for $15 & fairness, where fairness also means justice for migrant workers! Please take a moment now to sign the petition addressing Minister Flynn and Premier Wynne.