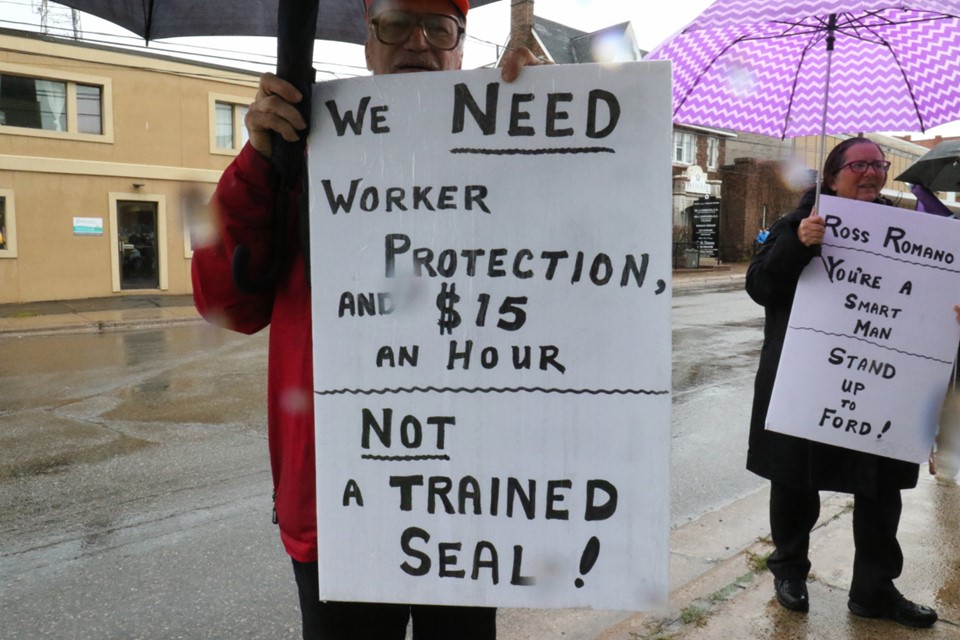 Bill 47 - also known as the Making Ontario Open for Business Act - will scrap the planned $15 per hour minimum wage and reduce the number of sick days allotted to workers.

The minimum wage in Ontario will also be capped at $14 per hour until fall 2020.

USW 9548 president Cody Alexander - who also serves as second vice-president for the labour council - says Romano has been silent in the Sault since the provincial election.

“We need to get the message to Mr. Romano that this is not acceptable, and that they need to stand for workers, as opposed to find ways to work them to death,” Alexander said.

Members of OPSEU, United Steelworkers and the Elementary Teachers’ Federation of Ontario stood with the local labour council outside Romano’s Bay Street office, hoping to speak with the local MPP.

Romano’s office told SooToday that Romano is currently participating in a series of roundtable discussions in Thunder Bay, which were booked about a week ago.

“Doug Ford seems to take offence to the working class people, and he seems to want to continue to put money in big business’ pockets while not being concerned with the actual people that make the big business their money,” Alexander said.

The Ford government has stated that the repeal of Bill 148 will cut red tape and encourage business investment in part by scrapping the minimum wage hike.

Alexander says that he’s aware of the “fear mongering from the Ford government.”

“I haven’t seen any evidence of that,” Alexander said. “As far as what we’ve seen, it’s doing better for business, because people have more money to spend.”

“Many of the people that are making the minimum wage are also consumers, so having more money in their pockets is better for business all around.”

Alexander told SooToday that the labour movement has been fighting to stop precarious work for decades, and for awhile it felt as though gains were being made in that fight.

“A lot of these gains that we made with Bill 148 were long overdue,” said Alexander. “The minimum wage was one those that should’ve been increased yearly but it wasn’t, so as far as I’m concerned, the $14 an hour is less than what they should’ve been making anyways at minimum wage.”