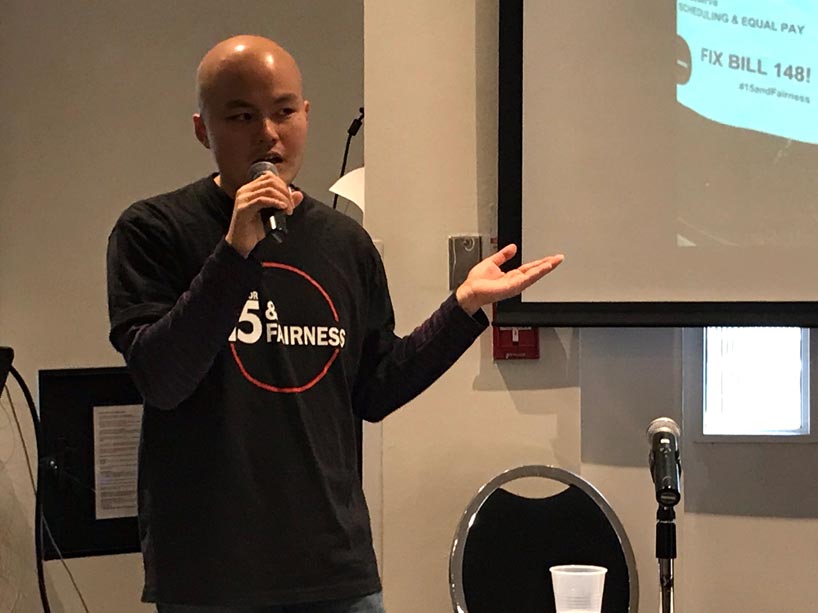 What happens when you’ve planned an event, and then the premise of the event falls apart the night before?

Consider the 8th Ryerson Social Justice Week, where a panel called “We Need a Raise!: The Fight for $15 and Fairness in Today’s Political Climate” was scheduled for October 24. The discussion would have focused on the long campaign waged by grassroots activists that would have raised the Ontario minimum wage to $15 in 2019, while also anticipating how gains could be defended against a potentially hostile new government.

But on October 23, the Ontario provincial government introduced the Making Ontario Open for Business Act. The bill, which passed first reading, will freeze or rollback many parts of the Liberals’ Bill 148, which passed in 2017 and began to take effect this year.

The panel was originally to have featured veteran labour organizers Deena Ladd and Pam Franche. Both were now busy at emergency meetings. In their place was Jared Ong, an organizer with the $15 and Fairness campaign, who did his best to lay out what the new legislation means.

“I’m an older millennial, and none of my friends work full-time, permanent, unionized work,” said Ong. “A lot of them are scrounging by on part-time work. A lot of them are pursuing their dreams, and they have to do part-time and contract work to pay the bills. … Disproportionately immigrants, racialized communities, people with disabilities, and First Nations communities work low-wage or minimum-wage jobs with no job security and without protections.”

Why $15? Ong noted, “We spoke to a lot of workers across Ontario. It’s a number that inspired a lot of people to work for, but it’s not a pie-in-the-sky number.”

So, what have the labour activists won and kept? January 1, 2018, the adult general minimum wage increased from $11.60 to $14. The new Ontario government has announced a freeze at $14 until 2020, after which the minimum wage will increase at the rate of inflation (reaching $15 by about 2024)—so, not a rollback. Workers are guaranteed three weeks’ paid vacation after five years with the same employer, and are entitled to domestic violence leave. In addition, employers can no longer ask for a doctor’s note. Employers will also still be required to maintain gender equality in their payments.

On the other hand: where Bill 148 allowed workers up to 10 days of job-protected emergency leave, two of them paid, the new legislation allows eight unpaid days off—three for sickness, two for bereavement, three for family responsibilities.

Employees will no longer receive three hours pay when they are on-call but not called in to work. They won’t receive three hours pay if their shift is cancelled with less than two days’ notice. Employers will not be required to pay part-time staff the same rate as full-time staff doing the same work. Workers will no longer have the right to refuse a shift without penalty if scheduled under four days’ notice.

New protections against job misclassification have also been removed. If an employer misclassifies a worker as an independent contractor, Bill 148 would have placed the burden of proof on the employer to prove that the employee was correctly classified in the event of a legal challenge. In the new legislation, this is reversed. The new legislation also removes some protections for union organizing, including contract-flipping.

With the Making Ontario Open for Business Act, MP Jim Wilson has said that the government is simply ending the “job killing” parts of Bill 148. Labour minister Laurie Scott says the reforms “will simplify, harmonize and reduce the regulatory burden for anyone willing to create jobs in Ontario.” For their part, activists cite figures that six months after the minimum wage increase, Canada’s jobless rate dropped to an 18-year low, external link.