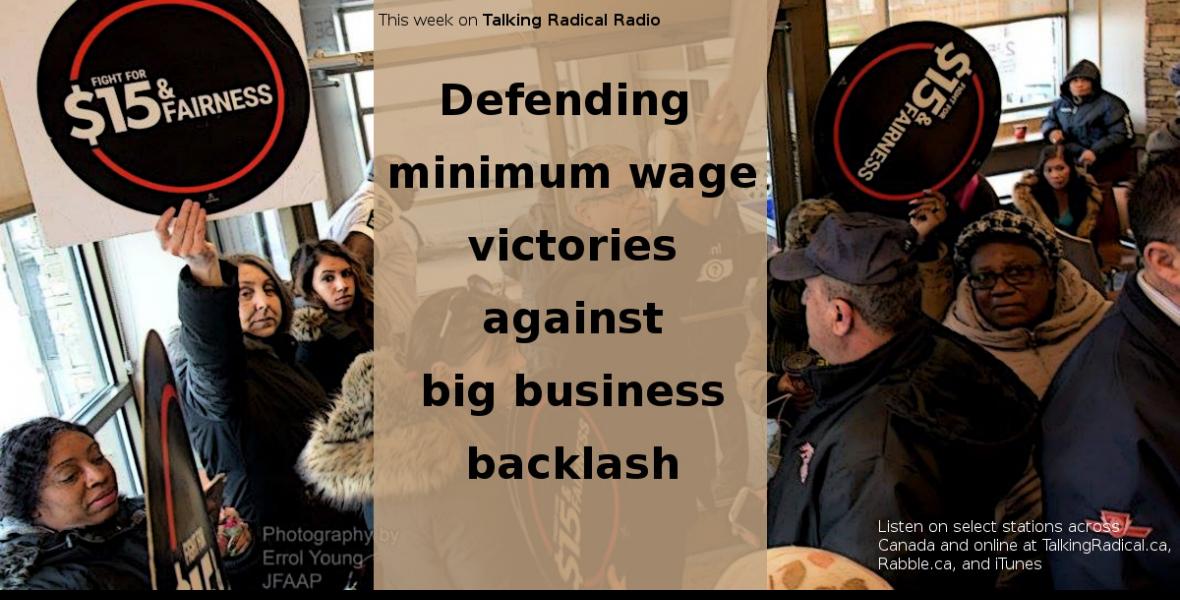 Pam Frache is the Ontario coordinator of the Fight for $15 and Fairness campaign, which has won major victories around minimum wage increases and reforms to labour law in 2017. And this year, with a provincial election looming, they are facing a major backlash from big business. Frache talks with Scott Neigh about the overall trajectory of the campaign, about the backlash, and about fighting to defend what they won last year.

It is generally true that when social movements or communities-in-struggle win something, that is rarely the end of the story. Whatever powerful interests have been beaten back to win gains for ordinary people tend to retreat temporarily, regroup, and then come back all the fiercer for having been shown to be vulnerable. Movements must then figure out how to defend their gains and, even better, figure out how to embed what they have won in the political landscape such that rolling it back is no longer feasible.

The Fight for $15 and Fairness campaign in Ontario is a good example. Though minimum wage struggles have a much longer history in the province, the current campaign began in 2013 in an intiative spearheaded by the Workers Action Centre in Toronto. There was little movement infrastructure to start with, but in the years since, a province-wide network of workers, community groups, unions, anti-poverty organizations, workers centres, faith groups, health providers, and labour councils has taken shape and, in several stages, pushed forward an ambitious agenda.

In 2017, in the face of growing pressure from this movement, the Liberal provincial government of Premier Kathleen Wynne introduced and ultimately passed legislation making sweeping changes to employment standards. Though the labour law reforms still leave much room for improvement, they are, according to Frache, an "extraordinary start" in terms of improving the lives of low-wage and precarious workers. And despite their earlier insistence that they would not do so, the Liberals ended up giving in to the wage demands too -- the minimum wage went from $11.60/hr to $14/hr as of January 1, 2018, and it is scheduled to go up to $15/hr on January 1, 2019.

While the legislation was being debated, there was no shortage of opposition from corporate interests. And since the minimum wage hike took effect at the beginning of the year, the reaction from the business lobby has been loud and fierce. While it has largely been framed as a defence of small business, actual small business owners seem to be taking a range of positions on the issue, while large corporations and institutions beholden to them drive the backlash. With a provincial election scheduled for June 7, 2018, the big business lobby seems keen to elect a government that will roll back the recent gains by low-wage workers.

Resistance to this big business backlash has been widespread and spirited. Some of it has been spontaneous – for instance, in various cities instances have come to light of businesses retaliating against workers who benefit from the minimum wage hike by clawing back various kinds of perqs and benefits, and in many cases there have been spontaneous local campaigns to shame the businsesses into relenting.

The Fight for $15 and Fairness itself has been doing a number of things to defend the recent gains and to make them harder for any future government to roll back. An important piece of that is doing trainings in a wide range of contexts, particularly with people who do frontline work related to employment, to make sure that as many people as possible know how the new legislation benefits them, and to get as many people as possible accessing the benefits and rights to which they are now entitled. Another piece involves countering scaremongering by the big business lobby by circulating solid research on the actual likely impacts of the minimum wage hike.

Of course, they are also using the movement infrastructure built over the last five years to mobilize people. In particular, they are part of the movement to defend Tim Horton's workers who have had various benefits clawed back at some franchises, despite the fact that the hard work of the mostly low-wage workers at Tim Horton's generates billions of dollars in revenue and hundreds of millions of dollars in profit each year for its parent company, Restaurant Brands International.

And in terms of the provincial election, Frache said, the ultimate goal is to "build a movement so strong that no political party wants to mess with us."

Image: Modified from an image created by Errol Young and used with the permission of the Fight for $15 and Fairness.

Listen to the Rabble.ca Podcast