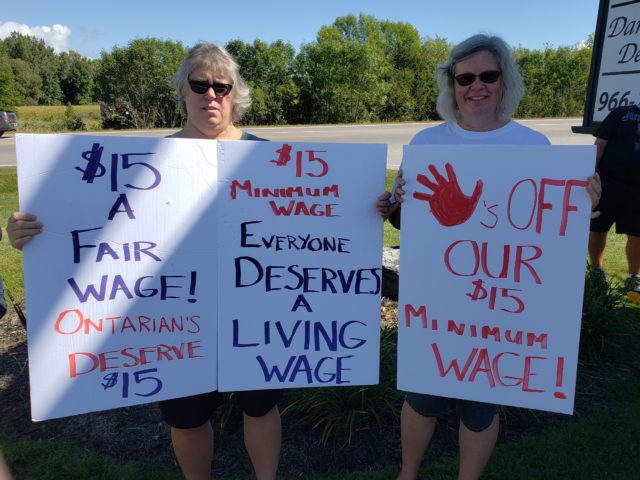 A small, but mighty local group was part of a province-wide movement to prevent a delay of a minimum wage increase Saturday afternoon.

About 30 people gathered for a rally in support of the “Fight for $15 and Fairness Campaign” in front of MPP Todd Smith’s office in Rossmore, organized by the Quinte Labour Council and the Kingston & District Labour Council.

This rally was held to protest against the plan by the Ontario Chamber of Commerce and big businesses to convince Doug Ford’s Progressive Conservative government to repeal Bill 148 (the Fair Workplaces, Better Jobs Act), freeze minimum wage at the current $14 an hour and cut taxes for minimum wage earners.

The group’s intention with the rally was to give people the right to fair and equal wages for work across the board to keep up with the higher cost of modern living.

This “Day of Action” event marks the 15-week period leading up to the $15 an hour pay rate.

Quinte Labour Council President Margaret Bourgoine says she wants Doug Ford and the Progressive Conservative Government to stand up to the Ontario Chamber of Commerce “for the people” and help push the minimum wage increase forward. (Photo: Brock Ormond/Quinte News)

President of the Quinte Labour Council Margaret Bourgoine says 66 percent of workers in Ontario are in favour of a minimum wage increase.

She says she wants Doug Ford to live up to his campaign promise to be “for the people” and stand up to the business lobby to provide workers with their right to an honest wage.

Lesley Jamieson of the Kingston Labour Council says it’s important to raise awareness in the community about the Fight for $15 and Fairness Campaign to give workers a fair wage to keep up with the cost of living. (Photo: Brock Ormond/Quinte News)

Lesley Jamieson is a member of the Kingston & District Labour Council and a supporter of the Fight for $15 and Fairness Campaign.

She says they want to send a strong message to the PC government to not bend to big businesses who are calling for the minimum wage freeze.

Chris Snooks, Chief Steward of Local 00641 UNDE Kingston, says that he came out to the rally to support equality in the local workforce.

For more information on the Fight for $15 and Fairness Campaign, go to their website.