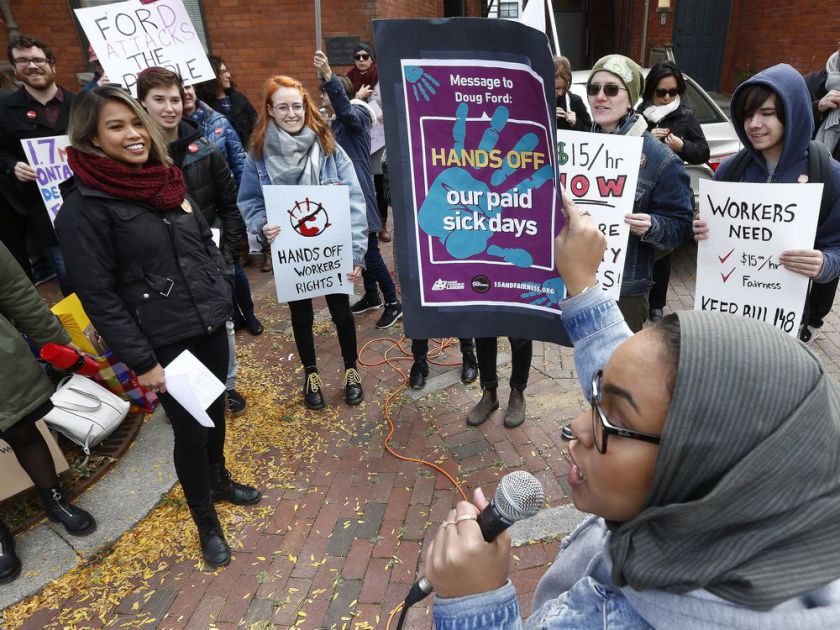 About 50 people gathered in front of the downtown offices of the Ottawa Board of Trade over the noon hour Wednesday to rally against the province’s repeal of parts of Fair Workplaces, Better Jobs Act.

The group consisted primarily of activists and labour union representative, including the Canadian Union of Postal Workers, the Public Service Alliance of Canada, Unifor and the United Steelworkers, among others.

They carried signs demanding “$15 an hour now, no more poverty wages” and joined in chants demanding better rights for low-wage workers in response to proposed labour law, introduced by the Progressive Conservative government on Tuesday afternoon, that freezes the minimum wage at $14 an hour until 2020 as part of a repeal of labour reforms passed into law by the previous Liberal government shortly before the spring election.

The Fair Workplaces, Better Jobs Act (Bill 148) introduced changes to the minimum wage bringing it up to $14 per hour with an increase later to $15 an hour, vacation entitlements, ensured employers were offering two paid sick days annually, enforced equal pay for part-time and full-time employees and changed rules for shift workers and on-call workers to give more notice before schedules could be altered.

The changes, which have been panned by many businesses across the province as being too costly or difficult to implement, have been touted as a victory by low-income and blue-collar workers in Ontario, according to Karen Cocq, who is with the lobby group Fight for $15 and Fairness and was one of the organizers of Wednesday’s protest.

She said the government’s actions are not supported by average Ontarians.

“This is the opposite of what the (Doug) Ford government said it was going to do,” said Cocq, while reminding the crowd of the premier’s election promise to put more money in the pockets of Ontarians. “They want to roll back all of the gains we have made through the years against low wages and precarious work.”

The group chose to hold its protest in front of the Ottawa Board of Trade at 328 Somerset St. West because those in attendance believe that an agenda set by “business elites” has helped to push the government to target minimum wage and worker legislation.

Cocq called out several members of the newly elected PC government, including Minister of Children, Community and Social Services Lisa MacLeod and Ottawa-West MPP Jeremy Roberts for playing a role in rolling back the legislation.

“We have one job. It is to make the Conservative government pay for what it has done,” Cocq said Wednesday. “We have to make sure they pay a political price. They’ve chose the side of business elites.”

The downtown gathering Wednesday was only the first of many rallies, which are being called “Emergency Action” protests, that are being planned across the province in the coming days. Several labour activists and lobby groups plan to hold their own demonstrations to oppose the Conservative government’s plan to roll back parts of Bill 148.

Government House Leader Todd Smith said the incidents — including death threats against Ford — were an attempt to bully and intimidate the government and would not be tolerated.

“What we want is to see … some of these other radical groups acknowledge the fact that a line has been crossed here,” Smith said. “I believe in democratic and peaceful protest and debate but we will not tolerate vandalism, intimidation or bullying. … We don’t know who did this, we are just saying everyone should say that that’s not acceptable.”