The occupation is over, but the fight continues

8 people were arrested and removed from Premier Doug Ford's office last night. They had the courage to put their bodies on the line to prevent more temp agency workers from getting killed. 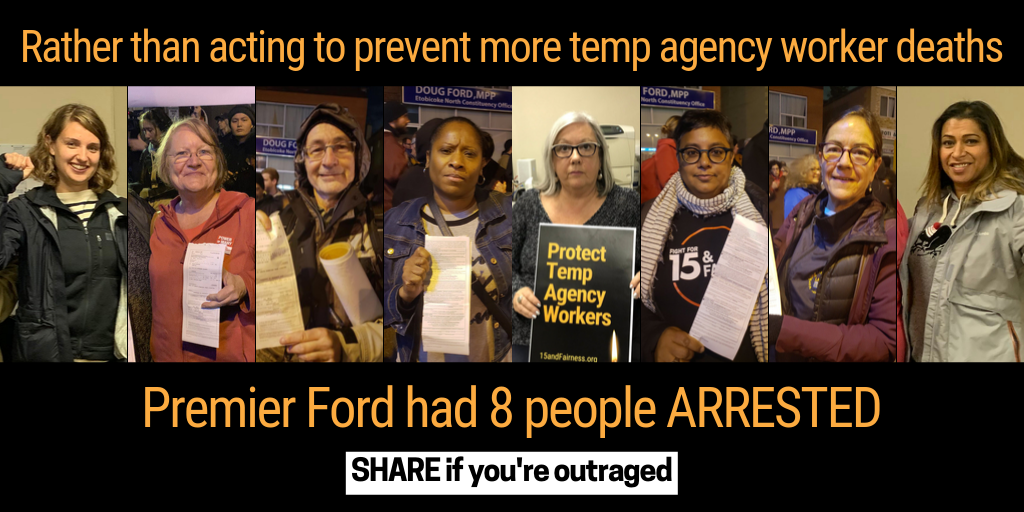 What did Ford do?

Instead of signing existing legislation into effect to stop companies from hiring temp agency workers for the most dangerous jobs, he sent in armed officers to arrest peaceful demonstrators. This is the Premier of Ontario.

Ford promised to govern for the people, but clearly he won't even lift a finger to prevent further workplace deaths. About our occupation, Ford's press secretary said "the actions demonstrated today are never justified." If five temp agency worker deaths -- two under his watch -- are not sufficient justification for action, what is?

We thank the occupiers for courageously taking action, to pressure Premier Ford to sign Section 83(4) of the Workplace Safety and Insurance Act into effect. We also thank the hundreds of people who came out to support the occupation at such short notice -- and the thousands who posted on social media to keep #OccupyFord trending the whole day.

And, if you can spare a dollar, please make a contribution to the cost of the occupation by making a donation here. Thank you for your ongoing support!