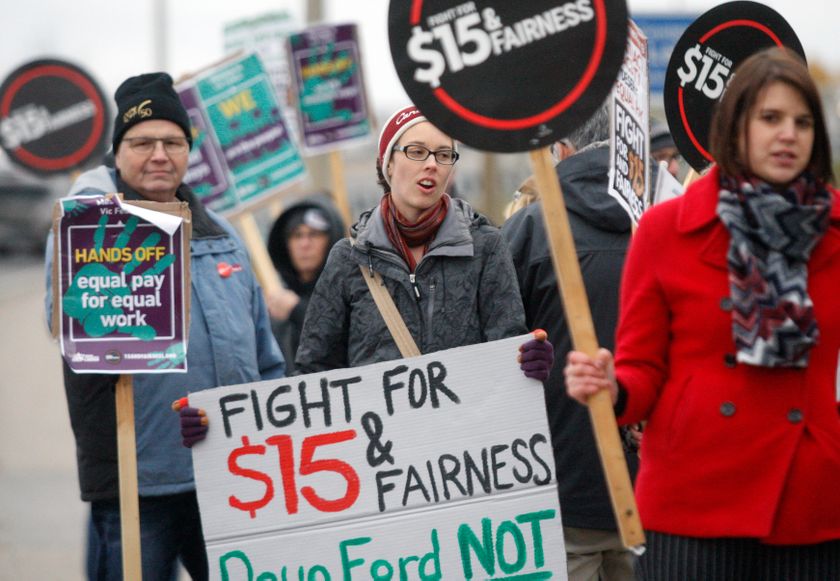 Armed with placards, about a dozen people rallied at the base of the Lakeshore Drive overpass near Judge Street, calling on the Doug Ford government to nix legislation tabled this week that will freeze Ontario’s minimum wage at $14 for another two years and do away with many of the other labour reforms introduced by the previous Liberal government.

“It really makes me pretty upset and incredibly disappointed in our elected MPP Vic Fedeli,” said organizer Jared Hunt, of the government’s Making Ontario Open for Business Act. “People believe he is the kind of person that will truly stand up for the people in our riding and people in need.”

Hunt said there are many people in Ontario and Nipissing who work low-wage jobs. And he asked who will fight to protect their rights from being “steamrolled” if it’s not Fedeli, who is Ontario’s finance minister.

He said there’s a disproportionate number of newcomers, women, seniors and those with disabilities who hold low-wage jobs.

“That’s the real impact on the community,” said Hunt, noting such employment is no longer reserved mostly for students or those wanting entry-level or part-time work.

He said that’s evident at places like Home Depot and Tim Hortons where there are employees are from all walks of life. Hunt said many low-income earners also have more than one part-time job because full-time work is harder to come by.

“That’s what Bill 148 (the Fair Workplaces, Better Jobs Act) was trying to help with,” he said, noting the labour reforms introduced by the former Liberal government were intended to make life better for those workers.

He said measures such as fair scheduling and sick days were aimed at bringing more balance to the lives of low-income earners who are often consumed on a day-to-day basis by work and the sovereignty of employers.

“We’re going to continue to apply pressure,” said Hunt, noting the Nipissing Decent Work group and other advocates will be looking to leverage public support and plan to step up their efforts through events and lobbying.

The Progressive Conservatives say businesses were hurt by the changes brought in by the previous regime and that it plans to link future increases to minimum wage to the rate of inflation.

“The previous government brought in a tsunami of new burdens and regulations that have imposed significant unnecessary costs on businesses and stifled economic growth,” said Economic Development Minister Jim Wilson as the government detailed its proposed labour legislation.

The legislation keeps provisions brought in by the Liberals that granted workers up to 10 days of leave if they or their child experiences domestic or sexual violence. It will also maintain regulations that grant Ontario workers three weeks of paid vacation after five years of service.

But a number of scheduling provisions will be scrapped under the Tory bill, including a minimum of three hours pay in the event a shift is cancelled 48 hours or less before it was scheduled to begin.

The North Bay & District Chamber of Commerce and its provincial counterpart applauded the move Tuesday, maintaining that former Liberal government’s Fair Workplaces, Better Jobs Act was “too much, too fast.”

“The compounding labour reforms and unintended consequences came at too high a cost to Ontario’s economy,” stated a release, which also welcomed the dissolution of the Ontario College of Trades and improvements to the journeyperson-to-apprentice ratio.

The college “has become overly focused on enforcement and regulation, limiting its ability to serve the public interest by attracting and training new tradespeople,” said the release.