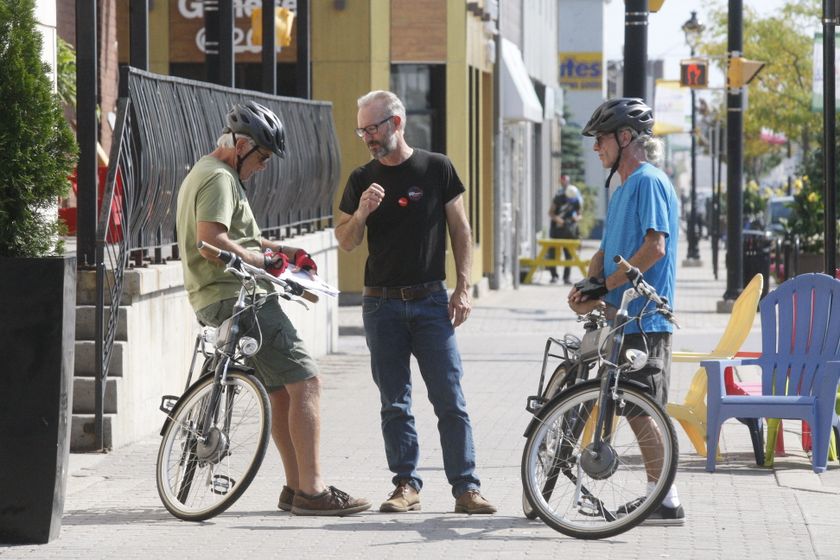 About a dozen people hit the streets in downtown North Bay Saturday to help garner support for the Fight for $15 and Fairness.

The volunteers with the province-wide campaign were busy collecting signatures for a petition calling on Ontario’s Progressive Conservative government to proceed with a planned minimum wage increase promised by the previous Liberal regime.

“Today is big day. It marks the start of a 15-week countdown until January, when the minimum wage bumps up to $15,” said organizer Jared Hunt.

He said Premier Doug Ford has signalled that he is not supportive of the wage hike for low-income earners and that the campaign is concerned the increase may be nixed.

“Because we’re worried about it, we’re talking with people about their rights,” said Hunt, noting the volunteers are not only speaking to people on the streets about the minimum wage increase, but other workplace changes that came under Bill 148 – the Fair Workplaces, Better Jobs Act – which was passed last year.

Hunt said the campaign believes that there’s a lot of support in Ontario for the increase in minimum wage and other workplace enhancements. And he said the campaign aims to demonstrate that to the new government.

“We think that two third of Ontario actually want the increase,” said Hunt, noting Nipissing MPP Vic Fedeli, Ontario’s finance minister, will be asked to present the petition at Queen’s Park at the end of the month.

If Fedeli refuses, he said another provincial member of Parliament from another party will be asked.

Fedeli, in interview last month, didn’t say what direction the province will be taking when it comes to the planned minimum wage hike. But his comments were not supportive of the move.

“We heard loudly and clearly from businesses how many jobs would be lost in Ontario,” said Fedeli, referring to province-wide consultations last year on Bill 148. “And, we saw immediately – just as the Financial Accountability Office had predicted – we lost 50,000 jobs in January.”

Fedeli noted how the premier has said Ontario is open for business again. And he said that means “lower taxes, lower hydro rates and less red tape.”

The minimum wage rose last year to $14, from $11.60 an hour. And many businesses have said another increase in January is too much too fast.

But Hunt said the campaign believes that’s a position propped up by large corporations that have long been “building wealth on the backs of workers earning low wages.”

“For decades, people in Ontario have been living in low-wage economy,” he said, of the importance to that the planned wage hike in January proceed. “When we help the lowest earners we help everybody.”