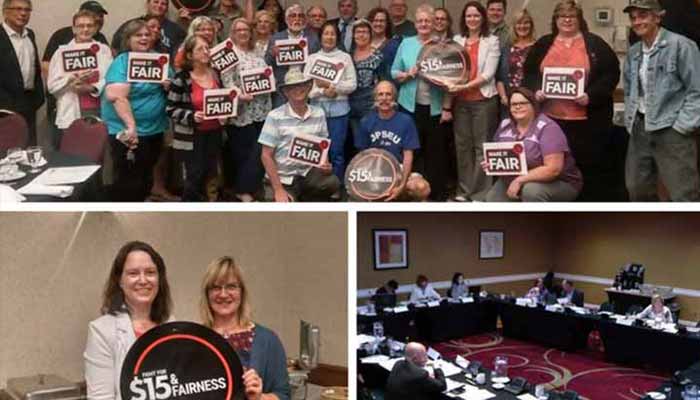 Every step of the way, the Fight for $15 & Fairness had a strong showing. Meanwhile, actions are still unfolding every week in communities across Ontario (click here or scroll below to see the list of upcoming events). This momentum explains why the government has been moving on our demands and why the Ontario New Democratic Party has stepped up to strengthen the Bill with many of the amendments our movement has been calling for.

The Standing Committee on Finance and Economic Affairs will be considering amendments to Bill 148 from August 21 to 25. In anticipation of this process, the ONDP promised to introduce amendments that would: eliminate the sub-minimum wage rates for students under the age of 18 and liquor servers; implement an extra week of paid vacation for workers after one year of service (instead of after five years, as the Bill is presently worded); increase the number of paid personal emergency leave days from the Bill’s current proposal of two (2) to five (5); and include dependent contractors in the definition of employee under Employment Standards Act. Although not everything we have asked for, these changes would be welcome steps forward.

Recently, NDP MPP Jagmeet Singh issued a statement calling for much stronger protections for temporary agency workers, for an end to perms-temping, and for greater regulation of temporary agencies. We look forward to the Ontario NDP formalizing these proposals via the amendment process. Click here to read Singh’s letter to Kathleen Wynne, calling for temp agency workers to be converted to permanent employees after three (3) months; for strong equal pay and benefits language in the Bill; and for limits on the proportion of the workforce that can be hired through temporary agencies. These demands echo our Fight for $15 and Fairness demands and would go a long way in curbing insecure work.