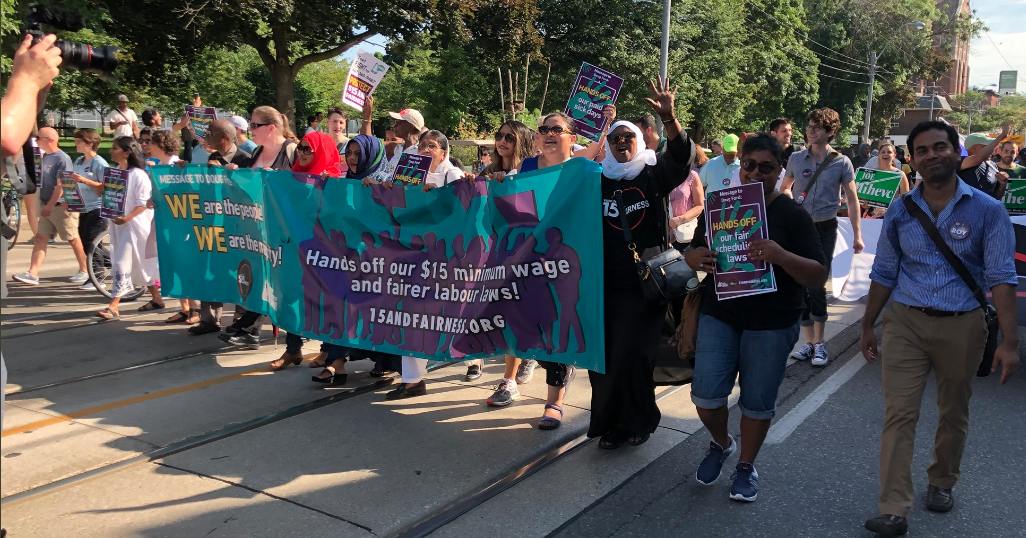 FOR IMMEDIATE RELEASE -- Representatives from the $15 and Fairness movement, including the Ontario Federation of Labour, a doctor, and an Imam from a Mosque in Etobicoke held a press conference at Queen’s Park today to call on the government to protect the $15 minimum wage and fair scheduling rules coming in on January 1, 2019.

Ontario is only thirteen weeks away from giving nearly two million workers a much-anticipated raise to $15, closely following Alberta where $15 is set to come into effect on October 1. Across Canada, support for a $15 minimum wage is on the rise, with active fight for $15 campaigns being led in almost every province, from Quebec to Manitoba, British Columbia to Nova Scotia.

In fact, an Angus Reid poll released in August showed that over 66 per cent of Canadians support a $15 minimum wage. A similar percentage of Ontario small business owners – 62 per cent – also believe the minimum wage should be at least $15 an hour, according to a Campaign Research poll.

Despite this majority support, the Ontario Chamber of Commerce has been calling on Premier Doug Ford to fully repeal Bill 148; legislation that made Ontario the first jurisdiction in Canada to provide two paid sick days to all workers, unpaid emergency leave, in addition to fairer scheduling laws and a $15 minimum wage taking effect January 1, 2019.

Deena Ladd of the Workers’ Action Centre, a non-profit that operates a confidential “bad boss” hotline for workers who need help, argued repealing the bill would be a grave mistake.

“After nearly 5 years of consultation, committee review and hearings, the Ontario government brought in Bill 148 last year to deal with the massive deterioration of wages and working conditions in this province,” said Workers’ Action Centre Coordinator Deena Ladd. “The Ministry of Labour itself found, during proactive investigations, that three-quarters of employers who break the law are repeat offenders. Clearly what is needed here is stronger enforcement, not the rollback of new labour laws that offer modest protections.”

“It is shameful that the Ontario Chamber of Commerce is calling on the government to eliminate every single step forward we have made in the last year, steps toward decent work and making it easier to join a union,” said Ontario Federation of Labour President Chris Buckley. “They even want to eliminate the unpaid emergency leave that prevents workers from losing their job if they have to miss work to care for a sick child. It makes a person ill just thinking about what eliminating this provision would mean for a single parent.”

Christine, a minimum wage earner, spoke at the press conference to ask the government to stand up for people just like her instead of giving into corporate demands.

“Working for minimum wage is a struggle,” she said. “I’m a college graduate. I'm in my mid-40s. I live alone. I have the same bills most families do, and I struggle to pay them. That's with four jobs across the GTA. All my jobs are minimum wage. Last year I earned around $22,000. You can’t live in Toronto on that. You can’t live anywhere in Ontario on that. You just can't. I'd like to say that's after taxes, but the truth is I don't earn enough to pay taxes. Two-thirds of minimum wage earners don't.”

Negative predictions from right-wing think-tanks like the Fraser Institute about the higher minimum wage have proven false. Ontario’s job numbers have been outperforming the rest of the country. According to the August Labour Force Survey by Statistics Canada, Ontario’s average weekly hours of work increased from 36.3% in August 2017 to 36.5% in August 2018 – better than the national average. In fact, total hours worked in Ontario rose by 3.3 per cent from January to August, after Bill 148 came into effect.

The incoming minimum wage increase is only one of the many aspects of Bill 148 that the broad coalition of community and labour advocates are speaking out for. “Ensuring paid sick days is not just an improvement to labour standards, but also a major public health advance,” explained Dr. Edward Xie. “The flu season begins next week, and for the first time ever in Ontario, every worker will have the right to paid leave if they are sick. Of course, only two of the ten personal emergency days are paid, so for many Ontarians, this is still a financial struggle. We need to be providing more paid sick days, not penalizing workers for getting sick, as everyone eventually does.”

-30
To arrange interviews or for more information, please contact: