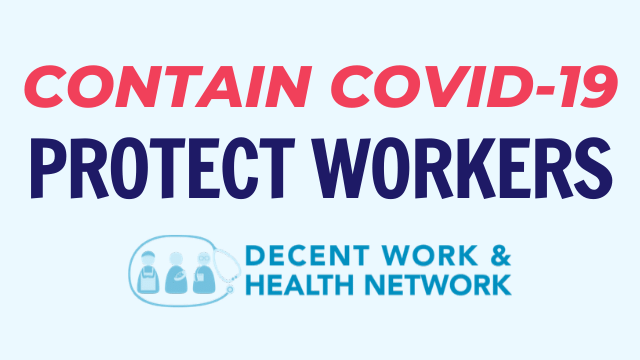 The full list of protective measures demanded by the Fight for $15 & Fairness Campaign and Workers' Action Centre are available here.

(TORONTO, Mar 16, 2020) —As the effects of the coronavirus unfold, it's clear that millions of workers across Canada are losing income, losing jobs and are being forced to go to work sick.

“It is simply staggering that in a context where millions of people could be infected with COVID-19, there has been no movement by the federal government -- or any province in the country -- to provide adequate paid sick days and job protection for workers who need it in order to stay home when they’re sick,” said Pam Frache, Coordinator of the Fight for $15 and Fairness. On Wednesday, federal health minister Patty Hajdu said between 30 and 70 per cent of the population could acquire COVID-19.

“The disaster facing workers is being compounded by public policy measures that fail to address the needs of workers,” said Deena Ladd, Executive Director of the Workers’ Action Centre. “Hundreds of thousands of workers will be without wages as schools and universities close and as public events are cancelled. Neither the Ontario nor federal government has moved to protect workers in this time of crisis.”

On Thursday, the Ontario government announced that schools will be closed for an additional two weeks following March break. “But who will bear the burden of school closures?” asked Ladd. “Parents who work – including single parents – will be scrambling for child care while frontline workers will be under enormous pressure to sacrifice their own health to fill the gaps created by these closures.”

“We are very worried about the health consequences for grandparents who step in to help with child care,” said Carolina Jimenez, who is a registered nurse and coordinator of the Decent Work and Health Network. “We have heard reports from Italy that the unintended consequences of school closures was spreading COVID-19 to the elderly.”

“In the context of a pandemic, we can’t rely on the usual sources of support such as grandparents or neighbourhood collective care,” said Jess Lyons of the Ontario Parent Network. “When education workers were taking action to protect our public school system, parents were working together to provide “solidarity camps” to ease the gap in child care. That’s simply not possible in light of coronavirus. Parents will need to stay home with their kids. And they desperately need adequate financial support to do so.”

Early childhood educators are really worried about the impact of school closures in Ontario. “I'm a substitute registered early childhood educator for my local school board,” said Brandi Wilson who works in Sault Ste Marie. “I work every single day, but I'm not technically on a long-term contract. If my child care centre closes, I won’t get paid for those weeks.”

Another early childhood educator, Laura Lepper, who works in a private, for-profit child care centre, has already used all her paid sick days as a result of an outbreak in her workplace in January. She is now facing the prospect of another two weeks of lost pay. “How am I supposed to pay my bills?”

“What about the impacts on live-in care workers?” added Ladd. “Many live-in care workers are without full citizenship. They are already vulnerable because of inadequate employment protections. They will be under even more pressure to fill gaps in child care and household responsibilities. Who is looking out for the health and well-being of these workers?”

As for Friday’s announcement by federal finance minister Bill Morneau, Frache said: “It is unbelievable the federal government has provided $10 billion for banks and corporations, but not a single additional penny for workers.”

“The federal government’s decision to ease access to EI work sharing and waive the one week waiting period for benefits means nothing for the 60 percent of unemployed people who do not receive EI when they need it. We need an emergency fund for all workers who can’t get EI and who are impacted directly or indirectly by COVID-19,” said Frache. “And we need to make it easier for workers to get EI by reducing the eligibility requirement to 360 hours. This is vital for the vast numbers of workers in precarious, part-time and contract work across Canada.”