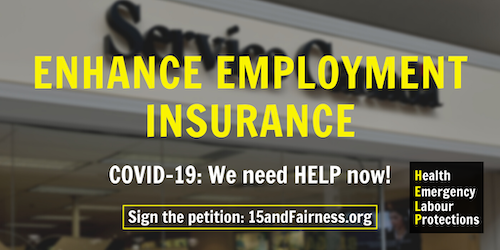 The full list of protective measures demanded by the Fight for $15 & Fairness Campaign and Workers' Action Centre are available here.

(TORONTO, Mar 18, 2020) -- The Fight for $15 and Fairness and the Workers' Action Centre are calling on the federal government to ensure a weekly minimum payment of $573 for all financial support programs during the pandemic, whether administered through EI regular and special benefits, the Emergency Care Benefit or the yet-to-be released COVID-19 Emergency Support Benefit for workers who can’t access EI. $573 is the maximum weekly benefit under current EI rules.

“The Federal government’s new Emergency Care Benefit sounds promising,” said Pam Frache, Coordinator of the Fight for $15 and Fairness. “But if it is administered along the lines of EI, providing only a portion of previous wages, it will be meaningless for the workers who need it most. Providing only 55% of a minimum wage is a disaster.” The Emergency Care Benefit announced earlier today is intended for those who must stay home from work for illness, self-isolation, or to look after children.

“Canada – and the provinces – should be following the lead of Quebec that is providing $573 weekly assistance for workers who must self-isolate,” said Deena Ladd, Executive Director of the Workers’ Action Centre. “Federal and provincial governments keep saying they will spare no expense to look after workers, well now is the time to put money where their mouths are.”

“We have real concerns about the length of time workers will be without income,” said Ladd. “Workers living paycheque to paycheque can’t afford to lose a day’s pay, let alone a week’s pay. We need the federal government to waive the one-week waiting period for all EI regular and special benefits – not just for sickness benefits due to COVID 19.”

“Our centre is also being inundated with phone calls from workers who are saying they can’t get through on the EI hotline,” added Ladd. “This reflects chronic understaffing of our EI system. We need a dramatic increase in EI staff – and we urgently need information to be made available in multiple languages online and over the phone.”

“There’s another potential crisis looming as well,” said Frache. “The government’s website says that applications for COVID 19 Emergency Support Benefit – the benefits that are intended to help those who can’t get EI – won’t be available until April with no guarantee of turnaround time for workers in the most desperate situations and who urgently need money now”

“One thing is becoming increasingly clear: this chaos – borne by people in the most vulnerable situations – stems directly from the absence of paid emergency leave rules at both provincial and federal levels,” said Ladd. “Had we had policy in place that mandated at least 7 paid days of emergency leave for all workers, provincially and federally, and had these policies provided for an additional 14 days of paid emergency leave during a pandemics like COVID-19, we wouldn’t have the financial desperation facing millions of people across Canada.”

“We continue to be shocked that no level of government has prioritized adequate minimum paid emergency leave days,” said Frache. “All the medical evidence shows that paid emergency leave policies of not less than 7 days, pay for themselves by allowing sick workers to stay home or look after sick kids, and by containing the spread of flu and other contagious diseases. In the context of coronavirus, paid emergency leave laws provincially and federally would have better protected public health – and bought the federal government time to roll out an effective, comprehensive plan to stabilize the economy.”

“We continue to demand action on paid emergency leave provincially and federally, and we look forward to additional announcements that will ensure that long term and temporary measures provide workers with adequate financial support to protect themselves, their families and their communities,” said Ladd. “As we have been saying, there’s not a moment to lose.”