Letter of Demand to RBI CEO 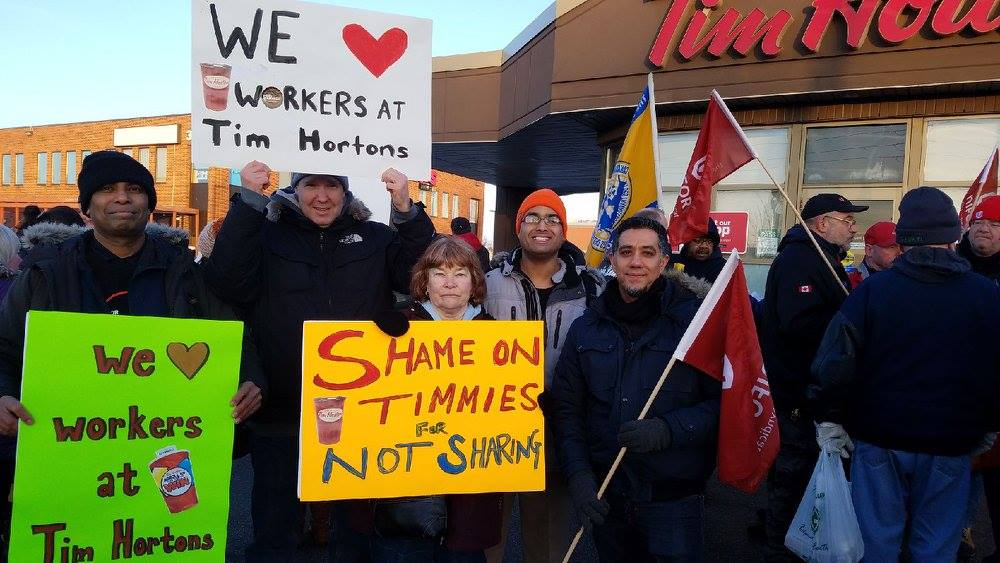 We are here today to formally request that as Chief Executive Officer of Restaurant Brands International (RBI) Inc.– the parent company of Tim Hortons, you take the immediate steps required to ensure that Tim Hortons franchise owners respect the spirit of, as well as comply with, labour laws in Ontario.

Specifically we have two demands:

As CEO of RBI, you have the power to take the necessary  steps to ensure that your company and Tim Hortons franchise owners comply with Ontario’s new labour laws and that no workers face any deterioration of their wage and labour standards.

Our delegation represents many community and labour organizations fighting against poverty and advocating for improved and fair working conditions on behalf of all working people in the province. Like millions of Ontarians, many of whom are your customers, we were disgusted last week to learn that many Tim Hortons franchise owners had taken steps to eliminate paid meal and coffee breaks, reduce basic drug and dental benefits, eliminate uniform and drink allowances as well as cut hours of work.

These actions against minimum wage earners are particularly galling in light of the “Canadian Values” branding that Tim Hortons trades upon. We are aware of the corporate structure at RBI where the parent company, Tim Hortons Corporation, dictates nearly every detail of a franchise-owner’s business practice. We understand that franchise owners must have a net worth of at least $1.5 million to be awarded a franchise. We are also aware that pricing structures are set at the corporate level, and that your parent organization, RBI, has the means and methods to ensure that franchise operators respect the law and follow policies and procedures set forth by the parent corporation.

Until benefits and paid coffee breaks are restored along with previous labour practices, such as the payment of shift premiums for overnight shifts and allowing servers the ability to receive tips instead of forcing workers to remit them to the owner of the franchise – we will be relentless in our efforts to draw attention and will continue to be critical of the predatory labour practices at Tim Hortons Restaurants across Ontario.

Customers across Canada are very concerned and are watching to see how your company responds. On January 19th, many national, provincial and local organizations are moving forward in organizing a National Day of Action to support Tim Hortons workers impacted by the cuts to wages and benefits.

Failure to meet our basic demands will further escalate actions across Ontario and Canada.