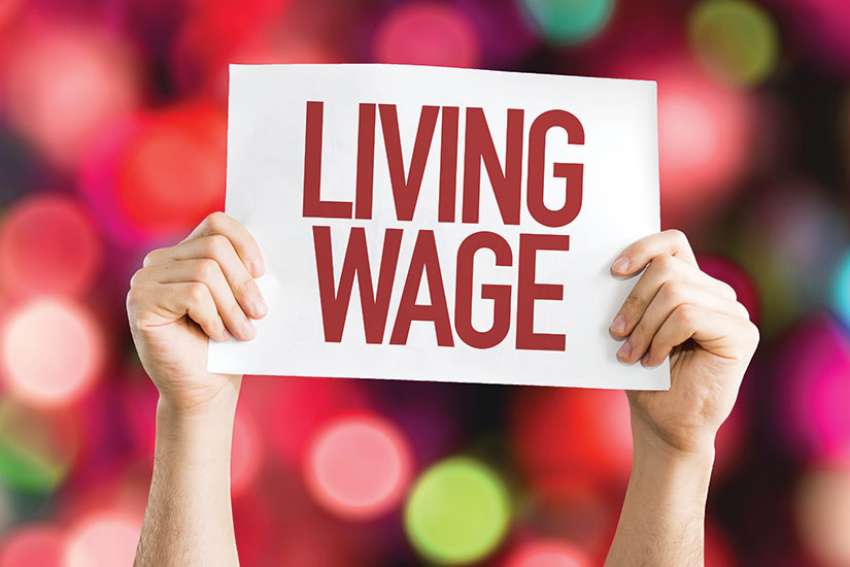 A $15-an-hour minimum wage, new rules to help unions organize, across-the-board increases in vacation and emergency-leave time and scheduling rules to prevent employers from suddenly cancelling shifts at the last minute are all getting strong support from churches and faith-based intervenors at cross-Ontario hearings into labour law reform.

In Bill 148, the Ontario government has taken two years of study into the changing landscape of work and decided on major revisions to the Employment Standards Act and the Labour Relations Act in favour of a better deal for low-wage, part-time and contract employees.

“The current standards, they really do undermine the value and dignity of workers,” said Sr. Sue Wilson, who runs the Office of Systemic Justice for the Canadian Federation of the Sisters of St. Joseph. Last week she submitted a brief to the committee holding public hearings on the bill, endorsing a gradual raise in the minimum wage to $15 per hour by January of 2019. After 12 days and 10 cities, the hearings wrapped up July 21.

The business community, represented by the Ontario Chamber of Commerce, Restaurants Canada, the Canadian Franchise Association and the Ontario Coalition of Concerned Manufacturers, claim the reforms, particularly a dramatic rise in the minimum wage from $11.40 to $15 an hour, will cripple businesses, raise consumer prices and prompt employers to cut staff.

“It’s simply fear-mongering. The evidence does not support that position,” said Wilson.

A group of 50 economists from universities across Canada signed an open letter in favour of the $15 minimum wage. The economists claim research shows no or little disemployment or inflationary pressure from raises to the minimum wage.

“This is fear-mongering that is out of line with the latest research,” said the June 29 open letter. “The weight of evidence from the United States points to job-loss effects that are statistically indistinguishable from zero.”

For Wilson, who holds a doctorate in moral theology, a minimum wage that gets full-time workers out of poverty isn’t simply a question of economic calculus. It’s basic, Catholic moral teaching.

“If you look at the history of the Church, at the history of Catholic social teaching, popes have been saying — pope after pope after pope — that these issues matter. They are at the heart of our faith. It’s so basic to who we are as a Catholic community,” Wilson told The Catholic Register. “We can’t go to communion every week and then think it doesn’t matter that we don’t create a community that is just and fair for people.”

She particularly relies on Pope St. John Paul II’s encyclicals Laborem Exercens and Centesimus Annus in arguing that the basic social contract should mean work leads people out of poverty.

“These are the kinds of things Pope John Paul II had in mind when he was writing about not treating workers as an economic unit or as a commodity,” she said.

In its submission to the committee hearings, the Interfaith Social Assistance Reform Coalition (ISARC) also makes extensive use of John Paul II’s teaching.

“We are deeply concerned about current employment practices that are deepening poverty, uncertainty and stress for tens of thousands of Ontario workers and their families,” said the ISARC submission.

Catholic members of ISARC include the Assembly of Catholic Bishops of Ontario, Catholic Charities of the Archdiocese of Toronto, the Redemptorist Fathers and the Society of St. Vincent de Paul. Major Jewish, Muslim, Hindu and Protestant organizations are part of the coalition.

“This practice demeans workers by treating them simply as an economic unit and ignoring the deeply-felt human need to be identified with the enterprise. Pope John Paul calls it a form of materialism. Catholic documents have long spoken of it as treating human labour ‘as a commodity’, ” said ISARC.

Stephanie Slade argues higher minimum wages and more regulation of the labour market makes work the privilege of a few.

“There should be options for everybody to work in the jobs that their skills and their experience level makes them qualified for,” she said. “If you raise that bar, people get locked out of the labour market completely. That’s not fair.”

“The teachings of the Church are clear. We are obligated to care about vulnerable people in the community around us,” Slade said. “But we are not necessarily obligated to support any particular policy that one Catholic says is the only way to help people.”

Wilson sees Bill 148 as just a part of the solution to poverty.

“Poverty is extremely complex. It has to be worked at from many different angles,” she said. “This addresses the working poor. It’s a sector of the population that has been hurting for a long time. It’s an important piece of the puzzle.”