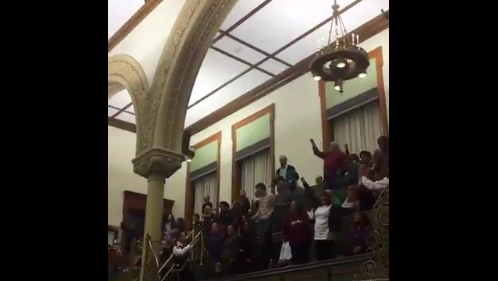 The Progressive Conservative government was supposed to pass its landmark labour law.

TORONTO — Ontario lawmakers delayed their final vote on a key labour bill because the public gallery was packed with protesters on Tuesday evening.

The Progressive Conservative government was scheduled to pass Bill 47, which will roll back labour reforms introduced by the previous Liberal government. The law will freeze the minimum wage at $14 an hour for about a year, and end two guaranteed paid sick days per year for workers.

After PC and NDP members spoke about the law, demonstrators got to their feet and chanted.

"Ford, you broke your promise. You're not for the people," they shouted, referencing Premier Doug Ford's slogan "for the people."

The protesters were organized by advocacy campaign Fight For $15 and Fairness, who accuse the government of shutting down public debate on the bill.

"This government has made no attempt to listen to any people in Ontario about this law," said Deena Ladd from Fight For $15 and Fairness.

She said the government only heard from the public for one day at a committee meeting.

"We had so many workers who put their names forward who wanted to speak, but they found out on Wednesday afternoon to speak the next day. You tell me: who can change their shift at the last minute?"

The PCs have said in the legislature that they consulted with stakeholders for months.

On Tuesday, Minister of Economic Development Todd Smith said that Liberal reforms were "a cinder block around the ankles of small businesses."

The government says that reducing the burden on businesses will help them create more jobs and strengthen the economy.

Minister of Labour Laurie Scott noted that Ontario's $14 minimum wage is one of the highest in Canada.

"The previous government had imposed a massive 21 per cent increase in employment costs on Ontario business just this year," she said during question period on Tuesday. "Instead of helping, this rapid increase led to a reduction in hours for many workers, and for our younger workers; it led to a reduction in their job opportunities."

Alberta is the only province with a higher minimum wage than Ontario, at $15 an hour.

Staff for Scott and Smith did not respond to HuffPost Canada's requests for comment Tuesday evening.

One owner of a small business, who was at Queen's Park Tuesday to protest the PC changes, said that Liberal reforms actually helped her business.

Gilleen Pearce, owner of Walk My Dog Toronto, said she has very low staff turnover because of high wages. She is also the spokesperson for a network of business owners called Better Way Alliance.

It costs thousands of dollars to train a new employee, and takes a long time for clients to trust new dog-walkers to come into their house while they're at work, she said in an interview with HuffPost Canada. Employees stay in their jobs because they make $14 an hour and have guaranteed time off.

"There's no way I would take that raise away from them after it was promised to them by the government."