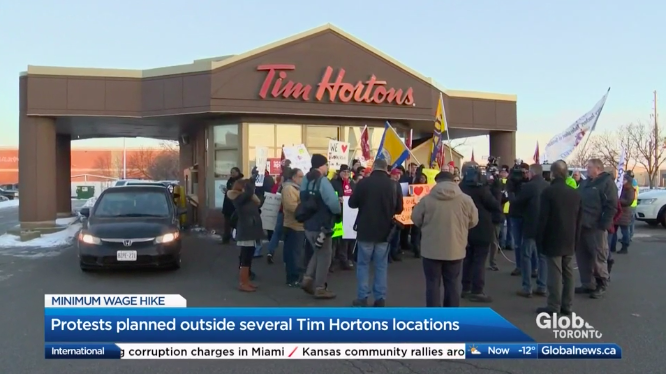 Tim Hortons employees at over 200 locations across Ontario received special Valentine’s Day cards and chocolates from workers’ rights advocates on Tuesday in a show of support for improved working conditions.

The action comes after several franchises slashed workers’ benefits and breaks after the province raised its minimum wage on Jan. 1.

“I think it’s shameful that the corporation has responded to the minimum wage increase by cutting meal breaks, by making workers start to pay for uniforms, by cutting hours and by taking away tips,” Deena Ladd of the Workers’ Action Centre told Global News at a Tim Hortons location in downtown Toronto Tuesday morning.

Over the past month and a half, protests have been held across the province in response to some Tim Hortons locations that have clawed back workers benefits, paid breaks and other perks as a result of the minimum wage increase in Ontario to $14 an hour from $11.60.

“Whether the workers belong to a union or not, they deserve to have respect and dignity in their workplace,” said Chris Buckley, president of the Ontario Federation of Labour.

“We’re going to caution these bad bosses to get their hands out of the workers’ pockets, pay them accordingly, treat them with respect and dignity or we’re coming after them as well.”

The protests began after Jeri Horton-Joyce and Ron Joyce Jr., the children of the brand’s billionaire co-founder Ron Joyce, rolled out the controversial measures at two Cobourg, Ont., locations they own.

Chocolates were handed out to Tim Hortons employees in Toronto on Feb. 13, 2018.

A letter handed out to staff last month cited the rising cost of the minimum wage as the contributing factor to the cuts.

“These changes are due to the increase of wages to $14.00 minimum wage on January 1, 2018, then $15.00 per hour on January 1, 2019, as well as the lack of assistance and financial help from our Head Office and from the Government,” the letter states.

The letter also states that health and dental benefits, which used to be covered 100 per cent, will be reduced to only 50 per cent coverage for employees that have worked there longer than five years, and less for those who haven’t.

A statement issued by Tim Hortons’ corporate head office last month said the “reckless” actions were taken “rogue group” of restaurant owners who “do not reflect the values of our brand.”

In numbers released last week, Ontario shed around 59,300 part-time jobs in January – the same month the province hiked the minimum wage, but experts say it may be too soon to know if the two are correlated.

—With a file from Paul Soucy and The Canadian Press