Help us fuel the fight to win decent work for ALL 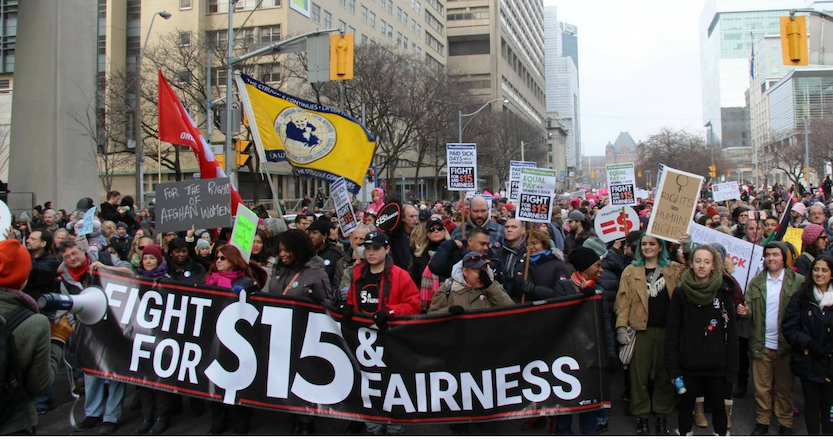 As of today (January 1, 2019), almost 900,000 federally-regulated workers across Canada will have the legislated right to three paid sick days; to equal pay for equal work for part-time, contract, and temporary workers; and to protections against contract flipping**.

There is no doubt that the Federal government took these modest, but important steps, towards legislating $15 & Fairness, after seeing the incredible levels of public support our decent work movement generated for these very rights in Ontario.

Fuel the fight to win $15 & Fairness for ALL!
Become a monthly donor (click here)

Thanks to you taking action, close to a million workers in sectors that cross provincial borders (such as banking, airlines, telecommunications, shipping, transportation, and more) will now benefit from improved working conditions. And furthermore, the federal government will also consider a $15 federal minimum wage by putting together a 10-month task force early this year.

However, as we saw last year with the Ford government's rollbacks of our provincial decent work laws, we can't take these federal victories for granted. This is why in 2019, we must fight even harder to assert every worker's right to $15 & Fairness.

In Ontario, this means holding the Conservative government to account for taking away our rights at work, cutting the services we rely on and weakening workers’ supports.

In the upcoming months, it's essential that we increase our public outreach efforts, to make sure every worker knows about – and benefits from – the improvements we were able to protect last year (click here to read them). Of course, we also need to continue organizing in every corner of the province, to deter the Ford government from further attacking our rights at work.

To fuel this work, we have a bold request: Would you be willing to give us $15 every month during 2019? (Click here to become a monthly donor).

If just 1% of our supporters made this kind of commitment to the Fight for $15 and Fairness, we could train and mentor local campaign organizers in 5 new cities. A monthly donation of even $5 (the equivalent of a fancy cup of coffee) would make a world of difference, allowing us to distribute more educational resources about our rights at work and make them available in multiple languages. Of course, any one-off financial contribution is also much needed and no amount is too little or too large!

By far, however, the most important contribution you can make is your continued support and solidarity. We have come this far because supporters like you have given their time, energy, and commitment where it matters most: in your community, workplace, or campus.

Thank you for all you have contributed so far! We have much to do in the year ahead, but we are confident that 2019 will mark another year of progress in our fight for decent work for all.

**Protections against contract flipping will allow workers to retain their wages and job security if a service contract is re-signed with another provider.