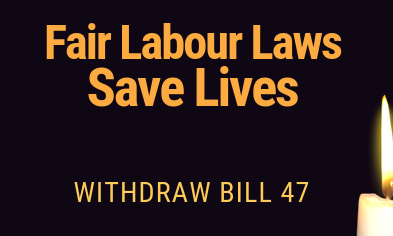 We are just learning news that a worker has been killed at Upper Crust bakery in Toronto. This is the 4th workplace death at a Fiera Foods-related company. The previous three workers who were killed, were all hired through temporary agencies. Fiera Foods was the subject of an undercover investigation by Toronto Star's Sara Mojtehedzadeh.

We send our deepest condolences to the family, friends and co-workers of the deceased. And in light of the tragedy, we are calling an emergency vigil tonight at 6:00 PM outside Queen's Park (Toronto). Please let us know if you can make it, and bring candles and flowers with you if possible.

The tragic death that took place last night, is not an isolated event! This a real life consequence of what happens when laws fail to protect us. 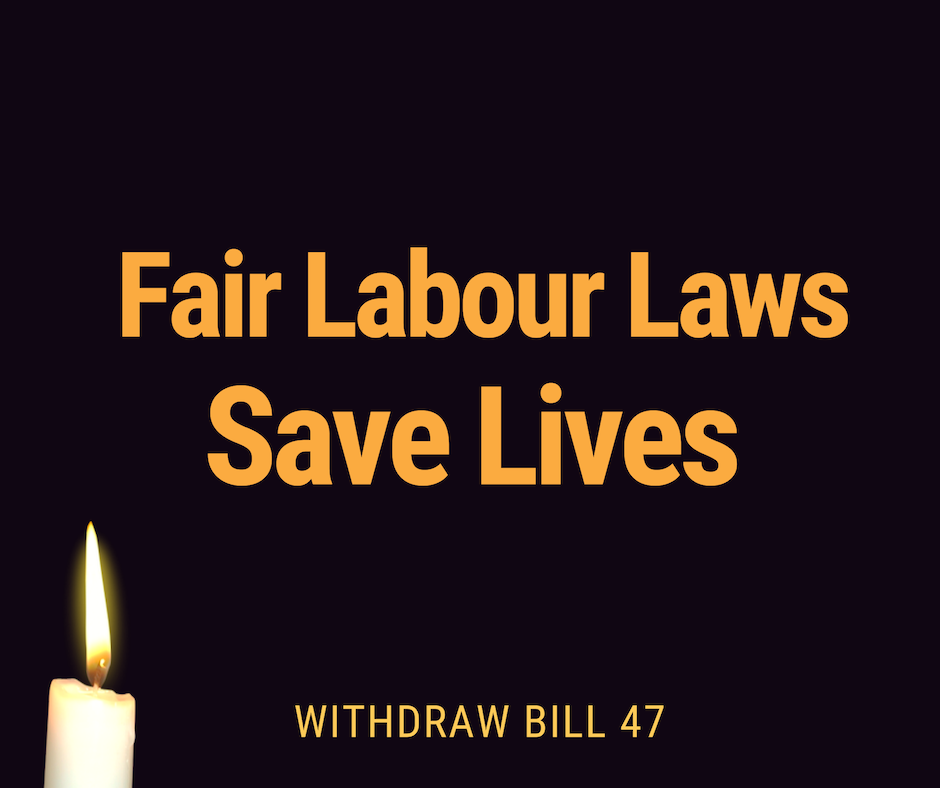 By tabling Bill 47 this week and threatening to rollback our new laws, the Conservative government has declared war on the most vulnerable workers in the province. If passed, Bill 47, would:

Unfortunately, the attack on workers doesn't end there. Yesterday we learned from a leaked government memo that proactive inspections done by the Ministry of Labour have been halted since September, despite being proven as an effective method for catching bad bosses. In other words, corrupt employers are getting the green light to continue breaking the law.

Also since introducing Bill 47 on Tuesday, several Conservative MPPs, Premier Doug Ford included, has been engaged in a smear campaign to paint our grassroots movement for decent work, as fringe, as vandals, as radicals following a break-in that took place at Labour Minister Laurie Scott's constituency office.

Let us not be distracted from the real threat coming from Queen's Park. This is why, across the province, faith groups, health organizations, community agencies, labour activists, students, teachers, and workers continue to organize actions (you can see upcoming events by clicking here).

News of this devastating death just makes it crystal clear that the protections we are seeking are crucial for the safety and well-being of our communities. The government must WITHDRAW BILL 47. Failure to do so will mean forcing millions of workers into poverty and make their lives even more unsafe and uncertain.

If you can -- please join us tonight at 6:00 PM outside Queen's Park for the emergency vigil. If you cannot come in person, please help us by:

- Inviting your friends to the vigil on Facebook - click here to spread the word
- Emailing Premier Ford and telling him to withdraw Bill 47 - click here to add your voice
- Tuning into the live-stream of the candlelight vigil at 6:00 PM via the campaign Facebook page
- Donating to the campaign, to help us have a fighting chance against the greedy corporations that are spearheading the campaign to roll back our new labour laws - make a donation now