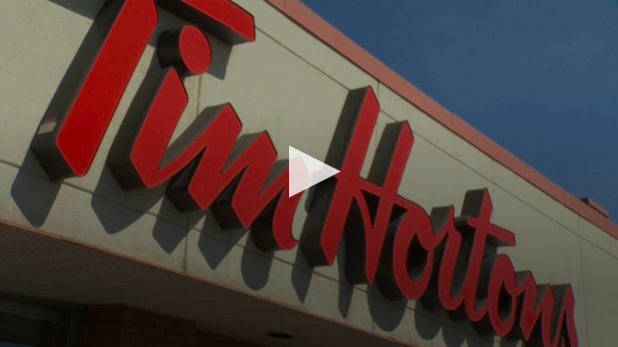 As a part of the nation-wide day of action, protestors gathered in Halifax to rally in support of Tim Hortons workers in Ontario.

Protesters are angered by some Tim Hortons franchisees who slashed workers' benefits and breaks after the province raised its minimum wage.

About 50 demonstrations were planned in cities across the country on Friday, although at least 38 were based in Ontario, including 18 planned in Toronto. As of Dec. 31, 2016, the number of Tim Hortons locations in Canada was 3,801.

Other cities involved in the protest included Calgary, Saskatoon, Regina, Vancouver and two other cities in British Columbia.

About 40 people marched up the middle of Spring Garden Road in Halifax, N.S. in solidarity with the workers Friday.

The group stopped in front of the Tim Hortons to wave their signs and chant a message that has spread from the situation west of the province gaining national attention.

“Workers and community organizations across the country are watching,” said one protester.

Rally goers in Halifax said they’re fighting for a $15 an hour minimum wage, as well as sick days and paid breaks.

Protesters also got signatures for their petition, asking the Nova Scotia government to increase the minimum wage.

Nova Scotia has the lowest minimum wage in Canada with the current minimum wage being $10.85. The province raised the wage by 15 cents last year.

“Anyone who thinks that we can function effectively in the $15 world as a 15 cent jurisdiction is not being economically realistic. that's where our government is,” said NDP leader, Gary Burrill.

Protesters said big businesses like Tim Hortons could easily absorb a bump to minimum wage, but smaller restaurants would have to make some changes to accommodate the higher wage.

“Food prices would increase, or you're going to have to look at your systems and cut expenses elsewhere. Either find cheaper options or look at your whole system and find out if there's more efficient ways you can do stuff,” said Halifax restaurant owner, Cory Urqhart.

Urqhart has 13 employees at Envie and the servers start at minimum wage. All of the employees receive health benefits and paid breaks and he said he doesn't want to change that.

Urqhart also said introducing a higher minimum wage over a period of a few years would be a good start for a small business like his.

President of the Halifax Dartmouth and District Labour Council, Suzanne MacNeil was among one of those at the protest and she said it’s the big businesses rally goers want to reach.

“We think that if business owners are depending on paying poverty wages in order to give hundreds of millions in profits to their shareholders, then we say, they need to rethink their business plan,” she said.

Rally organizers said they’re planning another rally in about a month and they believe it’s important to keep the pressure on the province and big coporations to let them know their workers are watching.

Tim Hortons has said the employee benefit cutbacks made by some franchises in Ontario "do not reflect the values of our brand, the views of our company, or the views of the overwhelming majority" of restaurant owners.

With files from CTV Atlantic’s Emily Baron Cadloff and David Hodges of the Canadian Press.