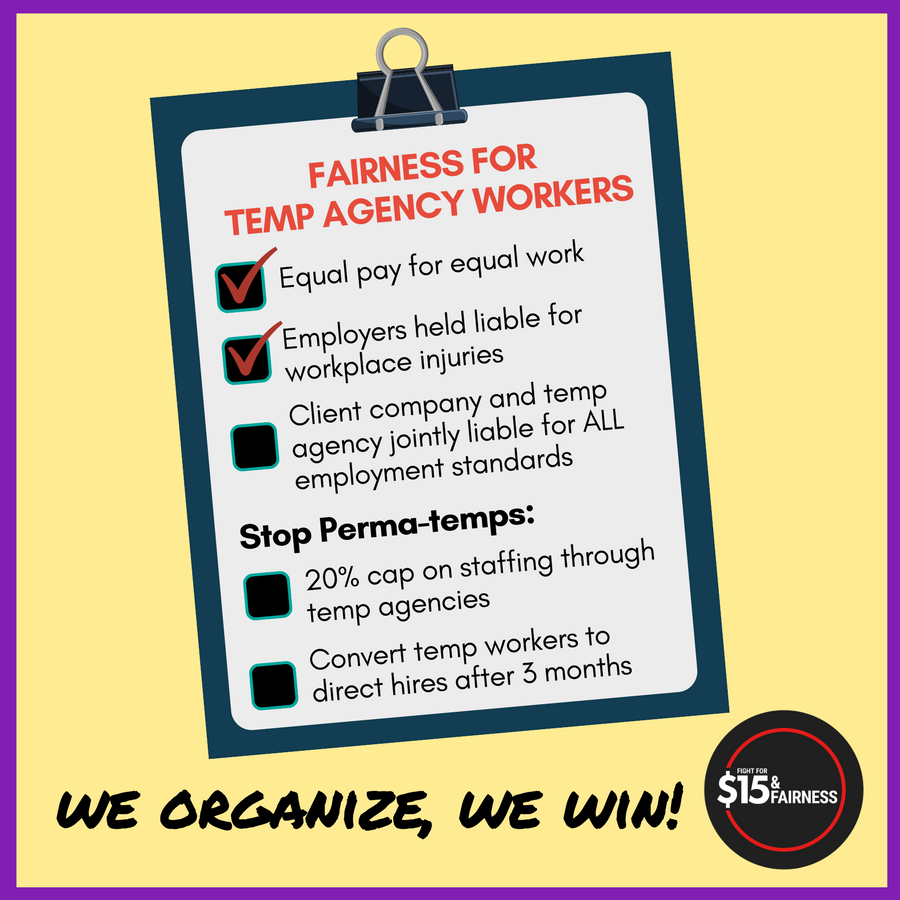 Now we need to put a stop to perma-temping. This has been a key demand in our Fight for $15 & Fairness.

The equal pay for equal work law that our communities won last Fall (coming into effect on April 1, 2018) and the measures announced today, will go a long way in curbing the unchecked growth of temp agency industry. The new equal pay measures, for example, will stop agencies from reaching into the pockets of workers by requiring that temp agency workers get paid the same hourly wage as their directly hired co-workers who do comparable work. But more needs to be done.

Together, we need to make sure that temporary agency jobs are truly temporary.
Last year, bakery giant Fiera Foods used temp workers to staff 70 percent of its operations. We cannot allow for companies to fill permanent positions with temp workers, sometimes years on end, without providing any decent wages, benefits and job security. The experiences of countless brave agency workers who've spoken out demonstrate that employers must be prevented from using temp workers as a strategy to increase profits by keeping workers precarious. Here is what we still need:

Our victories to date prove that by mobilizing across Ontario we can improve working conditions. We need your help to fight on! The temporary staffing agency lobby (including groups like ACSESS, Adecco and Randstad) has been a key backer in the Ontario Chamber of Commerce campaign to oppose a $15 minimum wage and fairness. These new measures will cut directly into temp agency profits, and the industry will do everything in its power to stop these changes.

We are building a fighting fund to spread the word about our new rights, organize workshops in neighbourhoods, hand out lawn signs and grow the reach (and muscle) of our movement. Will you contribute? Please click here to make a donation. Every little bit helps.

By making a donation, coming to a local event or publicly calling out bad bosses such as Tim Hortons, your participation makes the growth of this decent work movement possible. Thanks to your energy and commitment, we know that we will win $15 and Fairness for ALL workers, including for temp agency workers.