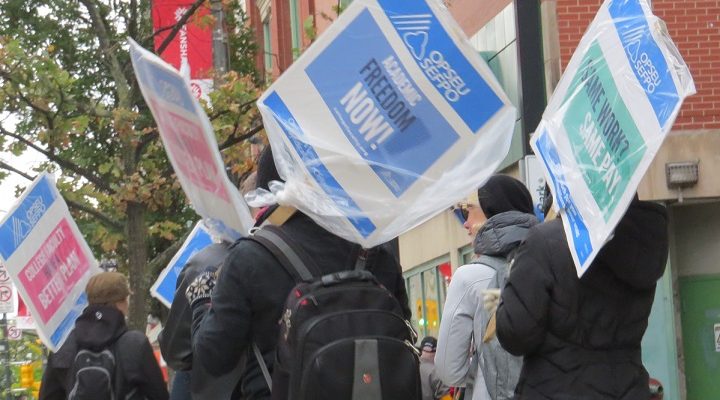 It’s been one year since the province-wide college faculty strike left students and professors out of the classroom for more than a month.

To commemorate the day, front-line college workers across Ontario are participating in a “Day of Action”.

“Equal pay for equal work is the law,” said OPSEU President Warren Thomas. “It needs to stay that way.”

There will be events at all college campuses, ranging from information tables to picket lines. According to an OPSEU release, some college campuses were trying to suppress Day of Action events.

Thomas said despite the mess left by the strike, it wasn’t all bad.

“It was a historic strike in the sense that we made major gains on academic freedom, on precarious work,” said Thomas. “Even though it was a nasty five-week strike, there was still some good to come out of the bad.”

Thomas said the union has added the “Fight for $15” into their Day of Action because of Ontario Premier Doug Ford’s first 100 days in office. On his first day, Ford cancelled the College Task Force, ending the joint system review.

“It’s pure vengefulness, short-sighted,” said Thomas. “Either that or he doesn’t care what anyone thinks.”

The strike, which saw college faculty walk off the job on October 16, 2017, was focused on academic freedom and a more fair split between full time and part-time faculty.