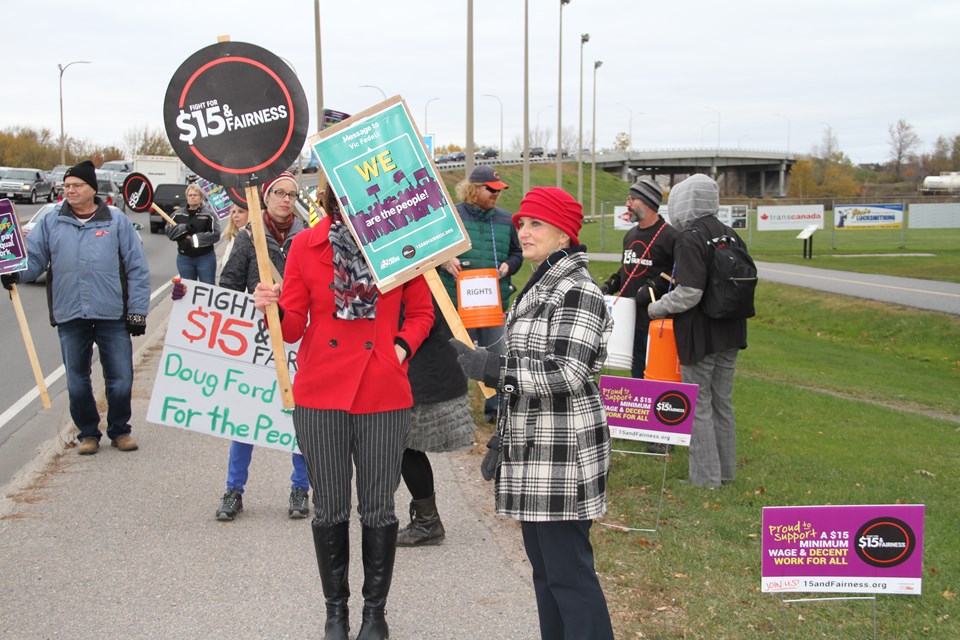 A group of concerned citizens was making noise along Lakeshore Drive during rush hour on Wednesday afternoon.

They were out along the overpass near Lakeshore and Judge with signs showing their anger over the provincial government's recent move to freeze the minimum wage at $14 an hour for the next two years and eliminate two paid sick days.

“We are out here in emergency response to the tabled law that the Ford government put out Tuesday afternoon,” said Hunt.

“We are making some noise and if it is not Vic Fedeli who is going to represent the low wage workers in our community, you know that’s our MPP, our elected official, then who will,” Hunt questioned.

Hunt, who was joined by a group of union workers and concerned citizens for the protest, says this event is part of a series of events they will be holding to protest the minimum wage freeze, which comes only a few months before the federal government moves the minimum wage to $15.

“As we speak to more people they start to realize what they have and what is about to be taken away - steamrolled, completely steamrolled - without any consultation whatsoever. Then they are going to start to ask more questions,” said Hunt.

Hunt believes this rollback legislation takes away some of the most basic protections from workers.

“This is an attack on low-income workers, women, people of colour and newcomers who are disproportionately represented in precarious jobs,” said Hunt.

Meanwhile, Nipissing MPP Vic Fedeli says the Ontario Government is acting to help create and protect jobs in Ontario by reducing the regulatory burden on Ontario businesses and workers.

“Businesses told us that the previous government created a regulatory burden that chased businesses and jobs out of Ontario and we can’t afford to ignore the problem any longer,” said Fedeli.

“This legislation is great for job creators and great for any person looking to find work in Ontario. By reducing the red-tape burden we are once again making Ontario one of the best places in the world to invest, and create jobs.  And we believe that anybody who is prepared to work hard deserves a shot at a better job.”

The Making Ontario Open for Business Act will, if passed by Ontario’s Legislature, replace the previous minimum wage scheme with one that remains at $14 per hour until 2020, at which point it will rise with inflation.

The Act will also replace Personal Emergency Leave rules to allow workers to take up to three days for personal illness, two for bereavement and three for family responsibilities while maintaining leave provisions for victims of domestic or sexual violence.