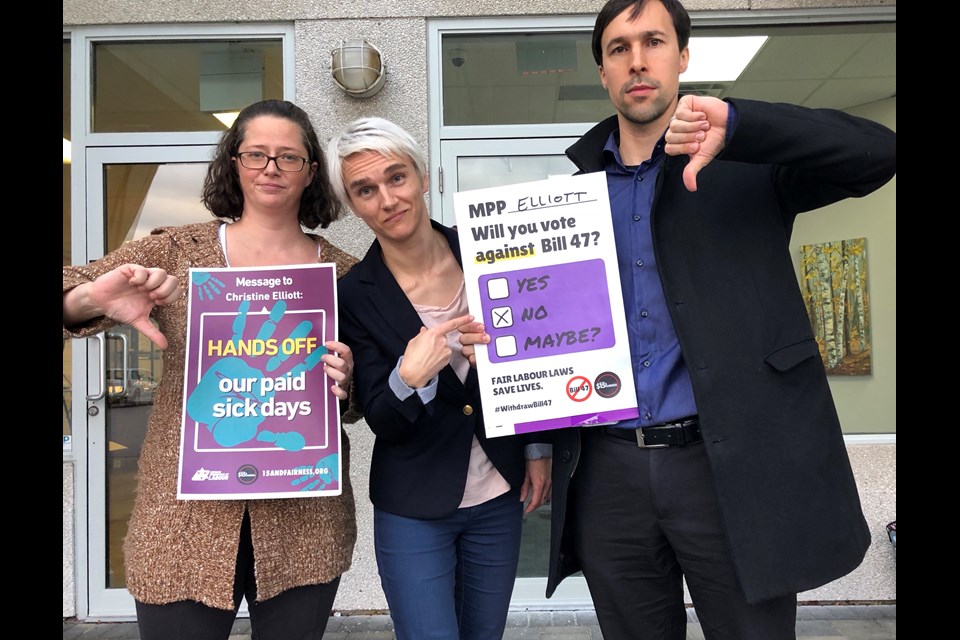 Workers rights activists met with Newmarket-Aurora MPP and Deputy Premier Christine Elliott on Tuesday during constituents’ week to plead their case that paid sick days are essential to public health.

As well as advocating for a $15-an-hour minimum wage and safe workplaces, members of Fight for $15 and Fairness and the Ontario Federation of Labour wanted to discuss with Elliott, also the province's health minister, the consequences of taking away paid sick days.

The local groups are fired up over the Ontario government’s move to repeal much of the former Liberal government’s Fair Workplaces, Better Jobs Act, also known as Bill 148. The Ford government’s Bill 47, Making Ontario Open for Business Act, would, if passed, freeze the current minimum wage at $14 an hour until 2020.

Personal emergency leave, currently consisting of two paid days and eight unpaid days of protected leave annually for each worker, would be replaced with the right to three sick days, two bereavement days and three family responsibility days annually — all unpaid. Employers could once again require a doctor's note for time off.

“Paid sick days are essential to public health, especially coming into the too often deadly flu season,” $15 and Fairness spokesperson Jessa McLean said in an email. “Allowing employers to demand sick notes would be a burden on the already overcrowded health-care system and contribute to the hallway medicine that the Progressive Conservative government has vowed to end in Ontario.”

McLean's request for a meeting was acknowledged by Elliott in early October when the deputy minister was confronted by protestors in Aurora as she made her way into a local chambers of commerce event. Elliott told them she would be happy to meet.

The group delivered a petition that had more than 500 names on it from Elliott's northern York Region riding to maintain worker protections in Bill 148.

“We presented hundreds of signatures from her constituents and we asked MPP Elliott to pledge to vote to withdraw Bill 47,” McLean said. “And she would not.”

The delegation who met with Elliott included McLean, Dr. Jesse McLaren, an emergency room doctor who shared his view that people turning up in the ER seeking doctor's notes for employers were a drain on public health resources, and CUPE Local 905 chief steward Katherine Grzejszczak, who shared her beliefs about fair scheduling, precarious employment and the positive outcomes of elevating labour standards across the board.

“Elliott acknowledged that the Health Ministry had not been consulted on Bill 47, which includes changes that will have obvious impacts on public health,” McLean added.

Meanwhile, Newmarket Chamber of Commerce CEO Tracy Walters said in a previous interview the Ford government’s new labour bill would "take off some of the pressure (small businesses) have been feeling on Bill 148 and the speed of the changes. Reducing the red tape burden will be welcomed."

While Walter said many local businesses support modernizing labour laws — and many already pay their employees above the minimum wage and for personal emergency days —  Bill 148 brought in changes too quickly and without consultation.

"It was too much, too soon," she added, "and actually caused more red tape."

In a media release announcing the regulatory and legislative changes to come with the expected passage of Bill 47, Elliott said: “This new legislation will help bring more jobs to communities like ours and create a better environment for businesses to grow. During the campaign, we heard that doing business in Ontario was becoming increasingly unaffordable, and Bill 148 imposed unnecessary costs on Ontario job creators. That’s why we’re cutting red tape and taking concrete measures to create jobs and make sure Ontario is open for business.”

~With files from Debora Kelly