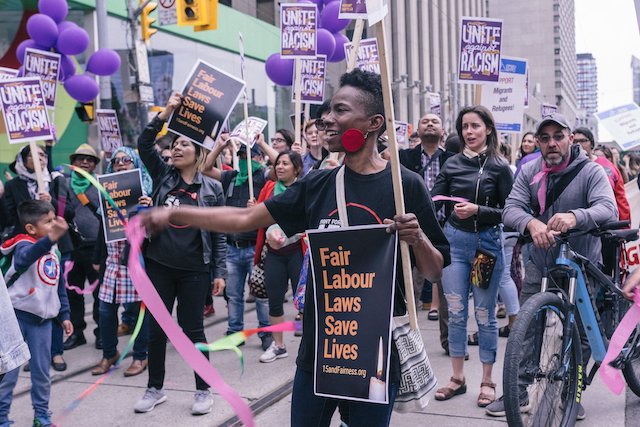 2019 has been an incredible year of resistance! Despite the Ford government's ongoing attacks on our rights at work, we protected important gains. We even made strides on the Canada Labour Code! Please consider making a donation to continue this important work! (click here).

Together, we preserved important wins for Ontario workers, including:

Over 2019, we continued the fight to protect workers against bad bosses. When a 5th temp worker was killed at Fiera Foods in September, we launched a targeted campaign demanding Premier Doug Ford implement an existing law to protect temp agency workers. Section 83(4) of the Workplace Safety and Insurance Act is a previous win that makes companies using temp agency workers liable under WSIB when temp agency workers are killed or injured on the job. When enacted, this law will save lives!

Following the broad public support we built in Ontario for our demands, nearly 1-million federally-regulated workers across Canada got new rights!

2019 was a tough year, but we built resistance -- and solidarity.

We joined forces with the Migrant Rights Network to push back against the politics of division. This was especially important during the federal election, when white supremacist leaders like Maxime Bernier tried to use racist and anti-immigrant politics to win votes. Instead he lost his seat!

Finally, as a testament to everyone's hard work, Now Magazine readers chose the Fight for $15and Fairness as the "Best Campaign of 2019"!

This award goes to you and thousands of other supporters who fuel this campaign with their time, energy and donations!

Chip-in now to help us build on this momentum: click here

Thank you again for all you've done to make 2019 a successful year.

It's clear we'll need to keep fighting in 2020 to protect what we have and take on bad bosses everywhere.

We wish you and yours the very best for the holidays and for the year ahead.