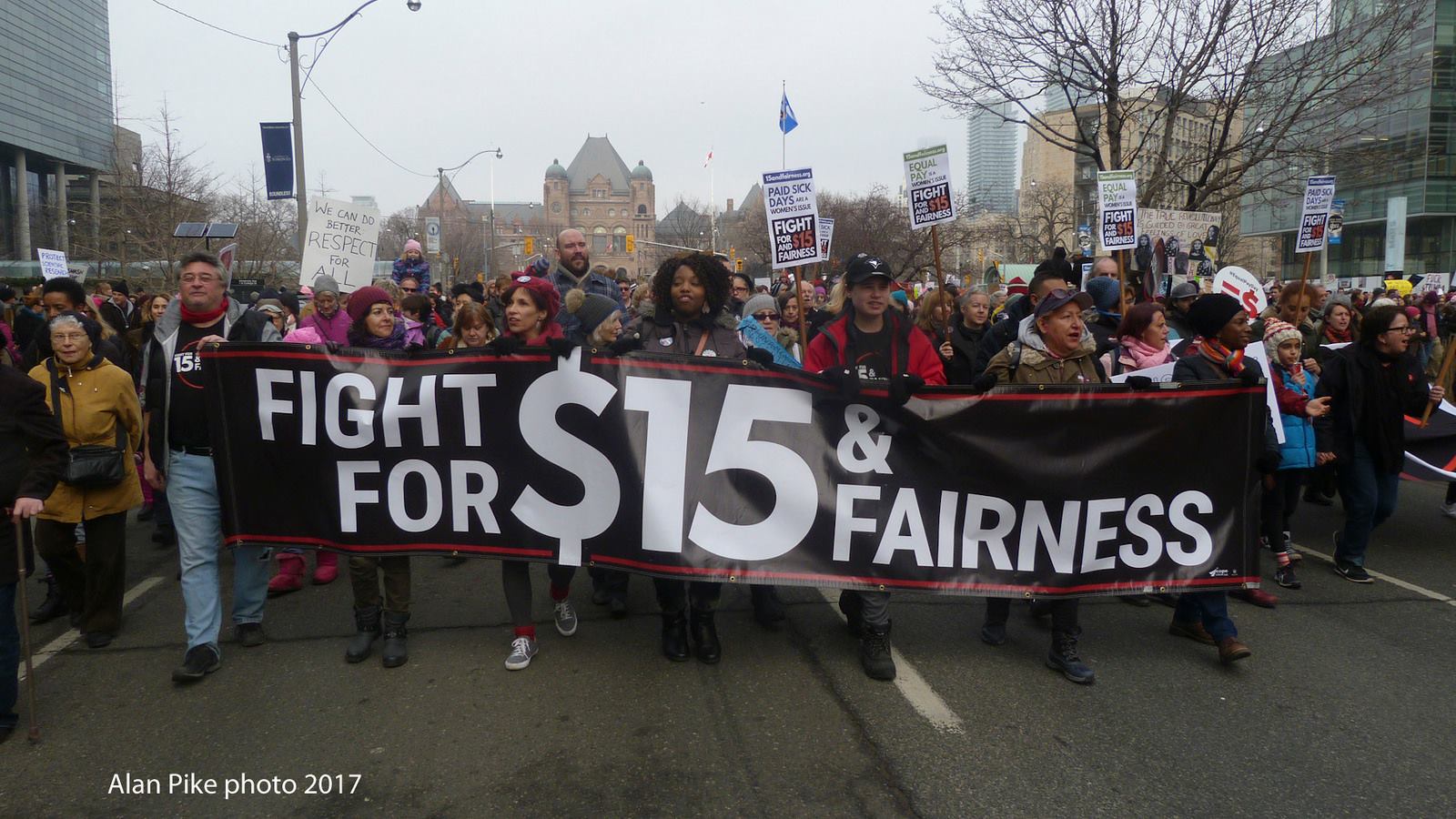 Thanks to thousands of supporters across Ontario and the important work we undertook last year, 2017 is off to a fantastic start for the Fight for $15 & Fairness! Within the first two weeks of January, organizing meetings for the campaign were held in Oshawa, Toronto, Niagara and by the Decent Work & Health Network. In fact, shout outs to the freshly-launched University of Toronto chapter, which already hosted two separate events!

The growing excitement for the campaign is also making headlines. Earlier this week, CBC reported: “labour groups are optimistic Premier Kathleen Wynne and her provincial Liberals will follow Alberta’s lead and commit to raising Ontario’s minimum wage to $15 an hour.” We are not surprised because the Forum Research poll released last fall showed that two-thirds of Canadians support a $15 minimum wage — and support is well over 70% among Liberal and NDP voters. Clearly, the Fight for $15 & Fairness has momentum.

However, winning $15 & Fairness will be an uphill battle. Employers are running scared and putting everything they’ve got into blocking our fair and just demands. That’s why we need your support now more than ever. Scroll down to find out what is already happening in your community. Can’t see an event near you? Let us know how we can help you to organize a Fight for $15 & Fairness event in your neighbourhood.

January 21
TORONTO: WOMEN’S MARCH
11:30 am to 2:00 pm | Northwest Corner of College & University click here for a map
Join the $15 & Fairness contingent at Toronto Women’s March this Saturday. We’ll be meeting at 11:30 am to form our contingent with banners, colorful signs and buttons. We know that decent work, a $15 minimum wage, equal pay, paid sick days and union rights are all women’s issues. Women and racialized workers are over-represented in low-income, precarious employment. Nearly 60% of minimum wage earners are women, and 35% are workers of color. March with us on January 21st.
To RSVP and share on Facebook, click here.

HAMILTON: OUTREACH BLITZ
12:00 pm to 2:00 pm | King & James, Jackson Square click here for a map
The Fight for 15 Hamilton crew is hitting the mall to spread the word and talk to workers about key campaign demands. We think its important to send a message that workers in Hamilton and Ontario are sick of living in poverty. So we’re making a “Wall of Wages” to show our community just exactly what people are earning. Come and join this creative action!
For more information about the event, contact [email protected]

January 24
YORK UNIVERSITY: ORGANIZING MEETING
1:00 pm to 2:00 pm | Rm 430 York Student Centre click here for a map
At this Fight for $15 and Fairness – York University chapter meeting, we will be planning upcoming campaign events as well as developing strategies to support the food service workers on campus. Join us and share your ideas.
To RSVP and share on Facebook, click here.

January 26
OTTAWA: $15 & FAIRNESS ORGANIZING MEETING
6:30 pm to 8:00 pm | 251 Bank Street click here for a map
2017 is going to be the year of $15 & fairness! Come out to the first organizing meeting of the year to plan our upcoming actions in Ottawa. Bring your ideas and bring your friends! Labour and anti-poverty activists, students and community members have been organizing across Ontario to win fair wages and fair laws for workers.The next few months are crucial to win progressive change, come and be a part of the solution.
To RSVP and share on Facebook, click here.

January 31
TORONTO: FIGHT FOR $15 AND FAIRNESS CITY-WIDE ORGANIZING MEETING
5:30 to 8:00 pm | Suite 223, 720 Spadina Avenue click here for a map
Join us for our next city-wide Fight for $15 and Fairness organizing meeting! We know we have the majority with us, but we need to organize this sentiment and put pressure on our MPPs to make sure we get the legislative changes we need in 2017! Snacks at 5:30 pm – Meeting begins at 6:00 pm and finishes at 8:00 pm.
To RSVP and share on Facebook, click here.

Do you have an upcoming Fight for $15 and Fairness event that isn’t listed here?Email us at [email protected] so we can include it in the next e-mail update! For the most up-to-date listing of campaign events, watch this space.