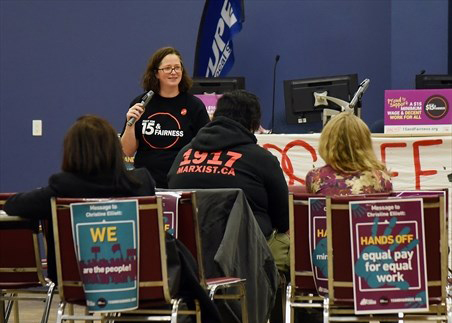 Some of Premier Doug Ford's supporters were “shocked” by the Progressive Conservative Party’s bill to freeze the minimum wage at $14 and eliminate Ontarians’ two paid sick leaves, says the organizer of York Region’s Fight for $15 & Fairness.

“I have spoken with people who voted for Doug Ford, and earn a minimum wage and find out they are not getting raise in January,” said Jessa McLean during a town-hall meeting she organized at Newmarket’s CUPE 905 on Nov. 15. “Not only they were losing their raise they were counting on, but it was happening by somebody who didn’t say anything about it at the campaign trail.”

McLean made the statement before the Ontario government passed Bill 47 on Wednesday Nov. 21.

Fight for 15 & Fairness movement started on April 15, 2015 in the province, and now it's escalating its activism after the Ontario government introduced Making Ontario Open for Business Act, 2018 or Bill 47 in late October to repeal reforms in the Fair Workplaces, Better Jobs Act or Bill 148 enacted by the former Liberal Premier Kathleen Wynne.

Click Here on the changes that will be made if Bill 47 is passed.

The town hall meeting was held in reaction to deputations made to the province's finance and economic affairs committee session, also held in the same day on Nov. 15 to help the government make a decision on the bill, which Fight for $15 & Fairness criticized for having “only a handful of people selected from a compiled list.”

At the town hall meeting, McLean read a letter by a single woman in her 40s named Christine, who works three part-time, minimum wage jobs. The letter was supposed to be heard by the finance committee, however Christine couldn't find a substitute to cover one of her shifts, showing how the deputations are lacking in real representations.

The organizer said the “biggest struggle” when advocating for workers’ rights is that “generally people are unaware of their own rights, when they gain them or when they lose them, so education is 90 per cent of the battle.”

“The Conservative government holds a majority on the committee just like they do in the legislature, and so they pick — predominantly — who will speak, and we know that they already don't support workers' rights.”

McLean also criticized local politicians' “inaccessibility to us but always listening to the corporate,” explaining how it took two months to arrange “a meeting with my own MPP Caroline Mulroney [for York-Simcoe], and even then, I was limited to 15 minutes.”

The activist said she had to “ambush” Christine Elliott, Deputy Premier and Minister of Health and Long-Term Care and MPP for Newmarket-Aurora, to speak with her at her Aurora office on Nov. 6.

At the meeting, McLean was accompanied by Dr. Jesse McLaren, an ER doctor and a delegate from the Decent Work and Health Network as well as Katherine Grzejszczak, the newly elected CUPE local 905 president and also an organizer for Fight for $15 and Fairness.

“We had to ambush her outside of a luncheon in order to get her to a promised meeting,” she said.

After a face-to-face meeting, McLean said Elliott acknowledged she and her ministry might have not gotten “everything right” on Bill 47.

McLean said she questioned Elliott about the cutbacks on sick leaves and if there is any “evidence” in “taking them away.” The activist recalled the minister saying: “Maybe we didn’t get everything right.”

“Christine Elliott said that she wasn’t even consulted on sick days,” nor its "impact" on the health-care system, she added.  However, “four days later, she (Elliott) bragged about her involvement in Bill 47, so she is lying to somebody.”

When asked about this by York RegionMedia Group, Elliott rejected McLean’s claim, saying she was “consulted on all legislation” as “as a senior member of cabinet.”

“We make decisions as a team. I look forward to working with members of our government and with partners as we continue to ensure that Ontario is open for business.”

“As Deputy Premier, Minister of Health and Long-Term Care, and MPP, I am proud to have worked with our government to bring forward Bill 47 and repeal most parts of the Liberals’ job-killing Bill 148,” the statement read.

At the Town Hall meeting, Carolina Jimenez, a nurse and co-ordinator for Decent Work and Health Network, also spoke out saying, “We can think of Bill 47 as a prescription for poor health.”

While supporters of Bill 47 say “workers abuse the paid sick days and revoking them will be good for business,” Jimenez cited studies from New York and San Francisco, where “basic days have been legislated, about five to nine days, most workers took three days, and a quarter of the workers took no days off.”

The nurse also said, on average, when people get “severely sick” such as with the flu, it usually lasts at least three days, and the Centre for Disease Control recommends people stay home for one to two days.