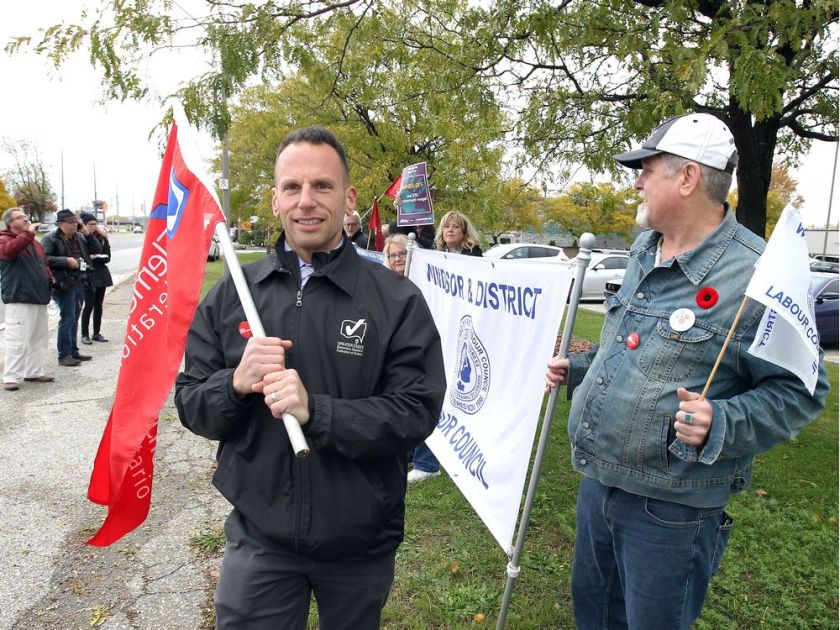 Hands off our decent work laws.

That was the message nine workers’ rights advocates had for Ontario Premier Doug Ford at a rally in Windsor Friday.

A new workplace standards bill, Bill 47, introduced at Queen’s Park in October, promises to repeal the majority of worker protections implemented in January by the previous Liberal government through Bill 148.

“What would be adequate is to leave the legislation as it is and then review it for improvements,” said Mario Spagnuolo, organizer of the local “$15 and Fairness” group.

The province-wide organization was created in 2013 to pressure the Ontario government to increase minimum wage and bring workers above the poverty line. Members of $15 and Fairness want to see provincial minimum wage rise to $15, something that was supposed to happen in January under Bill 148.

Bill 47 is regressive, Spagnuolo said. He and the members of his group, many of them union representatives, gathered near the Windsor Chamber of Commerce to raise awareness.

“We believe the Ford government is trying to ram through this legislation without proper consultation,” said Spagnuolo. “It’s regressive in nature, and what we want to see is some progress when it comes to the minimum standards and employment standards in Ontario.”

Under Bill 47, minimum wage would remain at $14 per hour instead of increasing to $15 per hour January 2019. Annual minimum wage adjustments would be tied to inflation, and would start in October of 2020. Employees would no longer be entitled to the two paid days of personal emergency leave each year granted by Bill 148. Employers would be allowed to pay part-time and full-time employees different wages for equal work, which had been prohibited under Bill 148.

“This is going to bring us back a few years instead of forward,” said Spagnuolo, who raised his group’s concerns at the constituency office of  MPP Rick Nicholls (C. —Chatham-Kent-Essex) before the rally Friday.

“We wanted for him to hear some of our concerns and bring them back to the caucus.”