Weston Web: Why a minimum wage of $15 will be good for Weston/ Mount Dennis 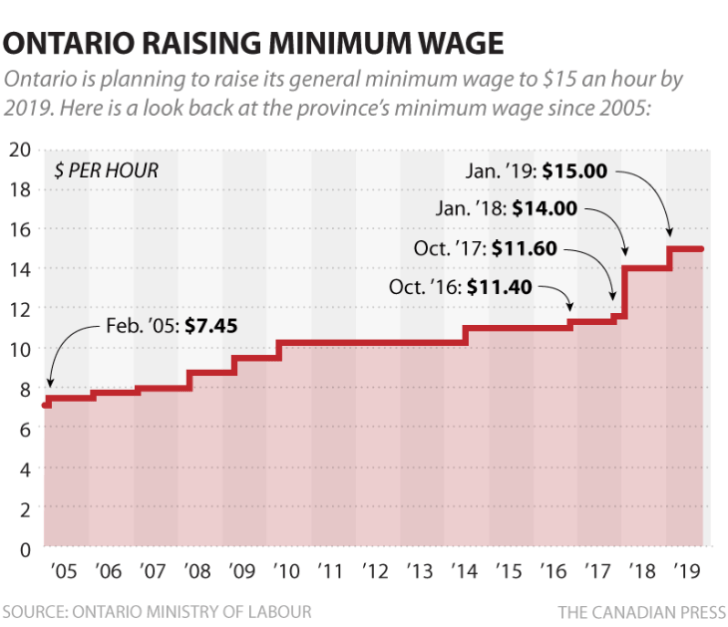 The chart above shows the modest proposal to boost the Ontario minimum wage as put forward by the Liberals:

Alleged think-tanks like the Fraser Institute claim that as many as 50,000 people will lose their jobs if the MW is elevated to such lofty heights. The Fraser Institute BTW, is one of the many propaganda arms of big business, generously supported by all of us because it has been allowed to call itself a charity. There are also claims that prices will rise as a result. Even the media seems to be repeating (many false) claims of impending doom without checking the facts.

In 2015 about 1.7 million people in Ontario earned less than $15.00 hourly. Incredibly, that’s just under 30% of the workforce. In Weston / Mount Dennis that percentage is likely considerably higher since we are one of the poorest areas of the city.

What we do know is that unlike the rich, poor people don’t send their money to tax havens. They spend it when they get it and largely on local goods and services. Income and sales tax revenues will actually rise as workers will pay more income tax and many may not need to apply for tax credits – a form of government wage subsidy for employers.

A study done last year, reported in the Huffington Post investigated the effects of raising Wal-Mart wages in the U.S. from $10 an hour to $15. The study concluded that revenue for the giant chain would be reduced by $5 Billion annually. Compared to the total annual revenue of $482 Billion, that works out to a hit of about 1%. In other words, raising wages 33% would increase costs less than 1%. Why then doesn’t Wal Mart raise wages? Share prices and dividends might go down.

Australia has a similar economy to ours and currently mandates a minimum wage of $18.29 – somehow, the universe has managed to stay in one piece. Perhaps Australians believe in fairness more than we do.

Our readers might want to tell local MPP Laura Albanese that they support increasing the minimum wage.